Re-review: The Curious Incident of the Dog in the Night-Time 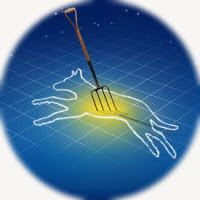 I put the original Cottesloe run of The Curious Incident of the Dog in the Night-Time at #2 in my best shows of 2012, and would have probably returned to see it again had it not sold out its entire run before it even opened. The initial success, based on the popularity of Mark Haddon's original novel, was borne out by the overwhelmingly positive reception to Simon Stephens' adaptation, and has led to a West End transfer which seems to be enjoying similar levels of success - it's not been open long at the Apollo but has already extended its booking period twice. The transfer gives me the opportunity to experience it again, as well as to see how the staging that was very specific to the Cottesloe fares when adapted to a proscenium arch stage. Plus I could bring along Andy, who had to miss out the first time, and Penny and Amy, both fans of the book.

Marianne Elliott's production was originally focused entirely on the stage floor, with the audience in the round, looking down at the manifestations of Christopher's extraordinary mind. For the restaging Bunny Christie's set has now acquired walls which also serve as new places to project or write on. But from our cheap seats in the gods (all Balcony seats are being sold at £12) the view wasn't too different to the one I remembered, and in a theatre whose sightlines I regularly grumble about, the cheap seats may be the better option. The back wall does get some interesting use, especially in the second act, but for the most part the inventive staging remains the same. 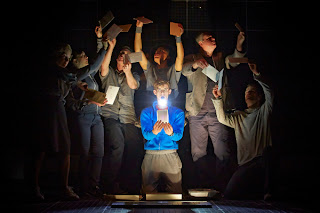 Most of the cast also remains, most importantly of course the central role of Christopher, still played by the extraordinary Luke Treadaway (although not on Mondays and Tuesdays, when newcomer Johnny Gibbon takes over the role; I don't know if this is because of other commitments or to give him a break from a physically demanding role - Treadaway looks a lot more muscular now than in the early days of the show. Or maybe the producers are just making sure they have someone ready to take over when Treadaway inevitably leaves what could turn out to be a long run.) Whatever the reasons for the alternate casting, we saw Treadaway again tonight, and he continues to manage the clever balancing act of making us empathise with a character who by his very nature resists human interaction. 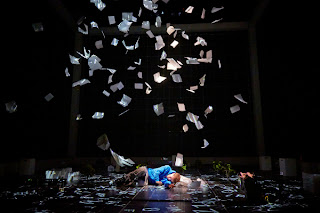 Only Nicola Walker, Una Stubbs and Paul Ritter (currently appearing right across the road as John Major opposite some old queen) have left the cast. Walker and Ritter's absence is particularly felt in the transfer; despite their best efforts Holly Aird and Seán Gleeson as Christopher's parents don't strike the right note of sympathy in the desperate things their son's condition occasionally drives them to, and consequently their relationships with Christopher aren't as moving as they might be. Luckily Niamh Cusack remains as Siobhan, the teacher who provides an emotional grounding. 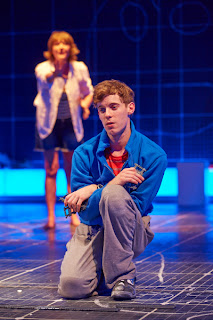 However it's easy to nitpick when I'm comparing and contrasting, especially with an evening that stood out so much for me the first time. I did also have three fresh pairs of eyes with me, all of whom had read and loved the book, but long enough ago that the details of the story could still surprise them (as well as a couple of coups de théâtre that the production retains and which got the audience very excited.) My sister admits to finding non-musical theatre hard to concentrate on but Elliott's endlessly inventive production was an exception. There was, undoubtedly, something unique about the combination of spectacle and intimacy of seeing this in the Cottesloe, but taken on its own terms the West End Curious Incident is still pretty much unmissable.

The Curious Incident of the Dog in the Night-Time by Simon Stephens, based on the book by Mark Haddon, is booking until the 4th of January 2014 at the Apollo Theatre.

Running time: 2 hours 45 minutes including interval and Appendix.
Posted by nick730 at 23:18