PREVIEW DISCLAIMER: This production invites the critics in next week. 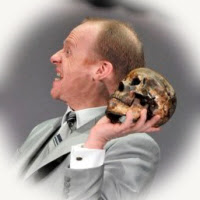 Although I'd like to approach every show with no preconceptions, some productions are easier to get excited about than others. I like Hamlet, and the cast the RSC has assembled, enough to warrant a trip to Stratford-upon-Avon. But David Farr is one of the company's most prolific directors, and Jonathan Slinger has been an almost constant presence in Stratford for the last few years. It's hard not to feel as if the pair have been let loose on the "big one" having paid their dues, rather than because of any really exciting idea they wanted to explore. It's a feeling not helped by the fact that Slinger isn't an obvious match to the role at this point in his career - at 40 he's the oldest Hamlet I've seen, overtaking Simon Russell Beale who was 39 when he tackled the role. Having put my preconceptions on the table from the outset I will say that as the show approached I got more excited about it; the production photos revealed an interesting set by Jon Bausor, and the publicity suggested a particular focus on the fencing that gives the play its climax, and I was intrigued by how that conceit would work.

And this sporting angle is one of the production's successes. Bausor's set is somewhere between a boxing gym and a working-men's club, with a grubby 1960s/70s aesthetic to the design, where the court of Elsinore is run by a laddish group of hard-drinkers with Claudius (Greg Hicks) at their head - the scene with the custom "more honour'd in the breach than the observance" seems to have been an inspiration for this. Following the death of his father, Hamlet returns to Elsinore but he, Ophelia (Pippa Nixon) and Horatio (Alex Waldmann, continuing to circle the title role I would imagine he has a fair chance of playing some day) are bookish types, out of place in this aggressive environment, even before the dead King's ghost appears to demand Hamlet avenge his murder. Surrounding him with a mousy Ophelia and cardigan-clad Horatio (this is a very knitwear-heavy production all round) cleverly makes Hamlet's age a non-issue: These aren't a bunch of students on a gap year, they're a group of somewhat socially awkward academics. 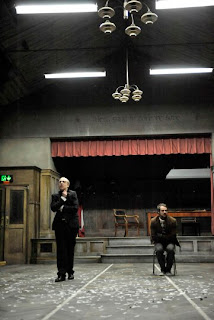 For Slinger's Hamlet this goes well beyond social awkwardness though, and this production makes no bones about the protagonist's mental state, clearly making him an introverted depressive from the start. Most Hamlets I've seen have more or less accepted the prince's claim that his madness is feigned, but Farr's production goes the other way. The play's religious element has been excised almost completely, instead Hamlet's battle is entirely with his own inner demons. Even before he claims to be feigning madness, he's got a permanent haunted look and is prone to hiding away in a corner and howling. Here his "pretended" madness is more giving himself licence to express the feelings he normally holds back. As the play goes on, the tattered fencing whites he wears as his "doublet all unbraced" increasingly resemble a straitjacket. 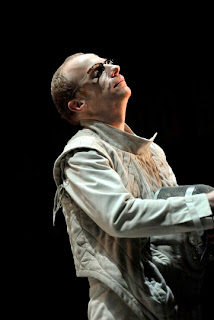 There's a couple of solid ideas behind this Hamlet but the execution falls down in a couple of vital areas: While the idea behind the lead's characterisation is clear, even if it doesn't always come off, most of the supporting characters seem to have been given little thought. The cast includes the likes of Nixon, Waldmann, Hicks, Luke Norris as Laertes, Robin Soans as Polonius and Nicolas Tennant as Guildenstern, but apart from some interesting moments to Nixon's Ophelia that make a lot of sense of the character's progression, there's not much to distinguish the supporting characters. Charlotte Cornwell's Gertrude is particularly bland. 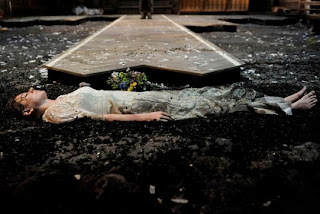 The bigger problem is the ponderous pace. This being a preview there could still be some tightening up over the next couple of performances but it would need to be pretty spectacular - half an hour's worth of speeding up at least. So many productions can make you forget how little actually happens, especially in the first half of Hamlet. But the play's inertia is laid all too bare here - perhaps an inevitable consequence of taking us so far into Hamlet's mind, but it's hard to believe this is the same play that can be such an effective thriller or, as in the RSC's last go at it, so funny: I don't think Farr's the best at bringing out Shakespeare's comedy anyway, and though Slinger eventually gets some laughs as he increasingly plays out the manic flipside to his depression, the play's plentiful wit is almost entirely lost. It's a shame to have someone like Soans play a Polonius who's quite cursorily dealt with by the production. 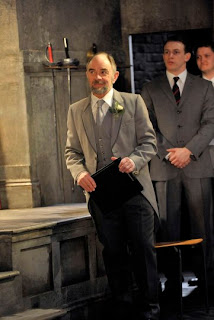 Also failing to hold my interest was the staging, which after the initial striking effect of Bausor's set fails to find visually interesting ways to bring the scenes to life (or audibly interesting for that matter - Gareth Fry's sound and David Sawer's music are very sparingly used.) And regular readers (both of them) will probably have figured out I'm not a fan of dimly lit shows, however atmospheric the effect. Here the interior gloom Jon Clark gives the show is certainly oppressively on-theme, but it's the second time this week the curtain call has made me think "oh, that's what the actors' faces look like!" If actors are working hard on their performances I prefer to actually see it, and this may be another reason the supporting characters struggle to make an impact.

So my worries that the reasons for staging the production might not be very exciting were unfounded, but there were bigger problems to be found. With its focus on depression this is a Hamlet that holds a lot of interest for me, so it's disappointing that some very exciting ideas don't quite develop into an interesting production. Every Hamlet is of course built around its lead, and although uneven there's a lot that's great about Slinger's performance. But when there's such a strong ensemble behind the lead it's a shame to see them going through the motions, and the production as a whole desperately needs an adrenaline shot.

Hamlet by William Shakespeare is booking in repertory until the 28th of September at the Royal Shakespeare Theatre, Stratford-upon-Avon; and from the 18th to the 26th of October at the Theatre Royal, Newcastle Upon Tyne.

Running time: 3 hours 45 minutes including interval (the first half comes in at just under two hours so a trip to the loo pre-curtain-up may be advisable.)
Posted by nick730 at 20:35