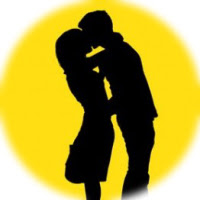 Peter Souter's previous writing credits are all in TV and radio, and there's a definite hint of sitcom to his playwrighting debut - particularly the first act, the "hello" part of Hello/Goodbye. Not that there's anything wrong with sitcom, especially when it's done this well, and with an edge of something deeper creeping in as the story goes on. Having burnt all her bridges with her friends Juliet (Jo Herbert) has rented a new flat. Or so she thinks - a mistake by the estate agents sees her arrive to find Alex (Andy Rush) already halfway through moving his things in. And there's plenty to move in, as in classic odd-couple style her chaotic nature is contrasted with his obsessive tendencies, which include a number of mounted collections ranging from shells and insects to Happy Meal toys - it's not necessarily what's in the collection that interests him, it's the completeness of it.

The arguments of their first meeting (which include Juliet calling her ex-boyfriend [Leo Staar] round to beat Alex up, only to find they get on quite well) are of course underscored by a lot of sexual tension, and the second act sees how far its aftermath stretches: Ten years later, the pair are halfway through getting divorced. 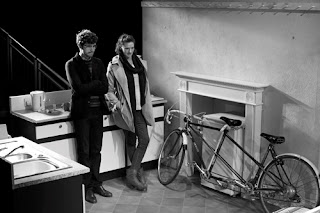 There's nothing revolutionary about Hello/Goodbye but as unashamed crowd-pleasers go it's hard to find fault with. Tamara Harvey directs a brilliant cast, Herbert on top form from the off with a fiery performance that perhaps explains why Juliet has trouble hanging on to friends (that, and the fact that she slept with a friend's husband; at his wedding reception.) Rush seems to be building a niche for himself as the unlikely sex symbol1, here the socially inept, borderline autistic geek who's gradually removing items of clothing 'cause he's carrying boxes on a hot day, oblivious to the sexual tension in the room. 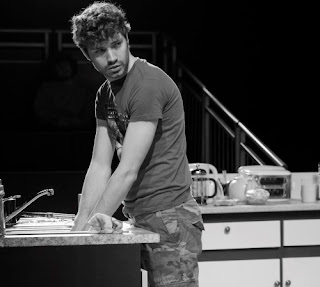 He also comes into is own in the second act, which swaps the hot summer day for a frosty winter one as the pair say their goodbyes, and despite the presence of a new woman (Yolanda Kettle) in his life, Alex is clearly unwilling to let Juliet go. There's still a lot of humour in the second half (Andy said he enjoys a bit of creative swearing, and Juliet in particular is given a fair bit of this to play with) but there's also a more emotional edge. Harvey and her cast have really put together a spin on these characters that makes you care about them past Souter's snappy lines. 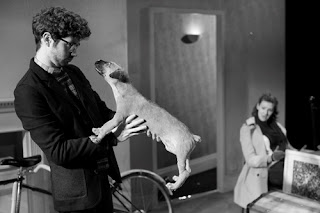 If there's a major message to Hello/Goodbye it's perhaps that those of us whose social skills are on the unconventional side feel as strongly as those who wear their hearts on their sleeves. But this isn't a play with pretensions of changing the world or the theatre. It's as focused on giving the audience a good night out as any West End blockbuster, but with more success than many of them. From the reaction of tonight's audience I could easily see this following Di and Viv and Rose from the Downstairs space to the main stage at Hampstead, although that would probably see it recast with bigger names, which in my opinion would be a shame. Go see it now while it's a bargain, and with a spot-on cast.

Hello/Goodbye by Peter Souter is booking until the 30th of March at Hampstead Theatre Downstairs.

1going by the roles I've seen Rush in so far, his range goes from "gormless plumber who can't talk to girls" to "dark wizard so cool even other wizards are starstruck." Which you've got to say, is some range. This part falls somewhere in the middle. But then, what doesn't?
Posted by nick730 at 22:34