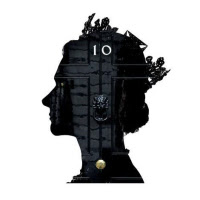 Possibly inspired by her own initials, Helen Mirren has carved out a niche for herself playing Queens of England, particularly the current one. Peter Morgan's award-winning film The Queen focused in part on her relationship with Tony Blair, through the weekly audiences the monarch holds with the Prime Minister. This is what Morgan expands on in his new stage play - leaving Blair himself behind, he looks at eight of the other people to have held the post during the Queen's reign, and how she might have got on with them during The Audience. Mirren reprises her role as well-known stamp model Elizabeth Windsor, and a high-profile cast join her as the procession of PMs in what are, of course, encounters completely imagined by Morgan - exactly what is really discussed at Buckingham Palace on Tuesday evenings remains strictly confidential.

Morgan's play doesn't stick to chronological order, so the woman we meet at the start, acting almost as an adviser to a jittery John Major (Paul Ritter) is at her most in-control. In contrast, when we jump back to her first audience with Winston Churchill (Edward Fox) he's quite put out to discover she intends to do more than just listen quietly to his weekly update - as the Equerry (Geoffrey Beevers) who introduces many of the scenes reminds us, the audience is technically a courtesy the PM extends to the monarch, not the other way round. 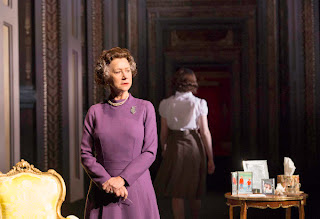 Inevitably The Audience is hugely sympathetic to Her Madge, painting her as the woman trapped by her position as much as she's exalted in it. Worse than being the figurehead of a nation without the associated power is the fact that she's not allowed an opinion on almost anything, but least of all matters of state, and by definition supports the PM's policies regardless of whether she agrees with them. Although this is put to the test during the tenure of Margaret Thatcher (Haydn Gwynne) who seems to intimidate even the Palace as she strides in to demand why the Queen's private opinion of her has made the papers. As one of the great villains of my lifetime, Thatcher was always going to be at risk of being a bit panto, but Gwynne and director Stephen Daldry keep her sole scene under control, the much-rumoured dislike between the two women left to simmer rather than turn into handbags at dawn. 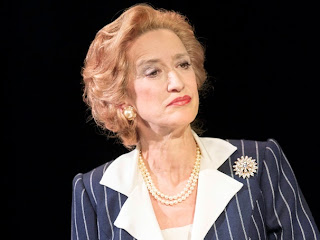 Although Mirren is the star turn and the Queen the central character - she's on stage almost throughout, including for some of the many costume changes - The Audience is really a play about Prime Ministers, and the extraordinarily varied array of people who've held the position. The things in their past they have in common that led them there, and the ways getting the top job affects them; in one notable, if particularly far-fetched scene, the Queen turns counselor again to talk an under-attack Gordon Brown (Nathaniel Parker) through his depression. But mostly the play aims, successfully, for comic effect, the inclusion of David Cameron (Rufus Wright) meaning a couple of topical jokes can be thrown in, like the Queen lamenting that she can't quit her job, unlike the Pope. 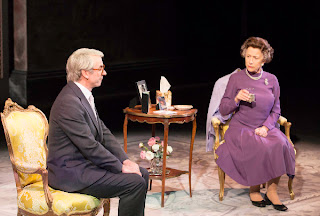 For all the formality of the meetings personal feelings do shine through, nowhere more so than with the man widely rumoured to be the Queen's favourite of all her PMs. Richard McCabe's gruff Harold Wilson puts her on the back foot when he breaks protocol by arriving at the Palace with his family in tow, but soon his (somewhat cultivated) earthiness wins both the monarch and the audience over as he asks for a Polaroid to commemorate their first audience together. He's also the only PM we see in the more informal setting of their annual weekend at Balmoral, which he responds to by grumbling about the weather; McCabe's lovably grumpy performance is a show-stealer. 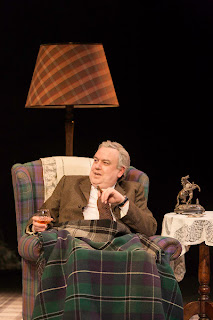 I'm not enough of a monarchist to support quite the rimjob The Audience gives Her Madge, but its argument of how well QEII has stuck to her duty not to interfere in politics is well-made, especially as past experience suggests her likely successor won't be able to keep his nose out quite as well. Daldry's well-paced production provides a good evening's entertainment.

The Audience by Peter Morgan is booking until the 15th of June at the Gielgud Theatre.