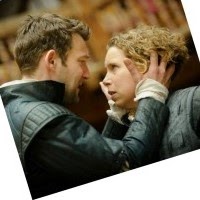 Between Thea Sharrock's near-perfect 2009 production, two helpings of the touring version and most recently a charming visit from Georgia, As You Like It must be the play I've seen the most times at Shakespeare's Globe. All those past productions have established their own identity in my memory despite being in the same setting, but I'm skeptical that Blanche McIntyre's new production will prove quite as memorable. The big deal this time around is the casting of Shakespearean star and Globe regular, Michelle Terry in Shakespeare's biggest female role, Rosalind, daughter of a banished Duke, and herself banished when her usurping uncle takes against her on a whim. She flees to the Forest of Arden disguised as a boy, accompanied by her cousin Celia (Ellie Piercy.) There they encounter Rosalind's father (David Beames) and the exiled court who've made themselves at home there.

But Rosalind maintains her disguise as "Ganymede," because Orlando (Simon Harrison,) whom she fell instantly in love with back at court when he took his shirt off, is also in the forest. She decides to test his love by impersonating herself, a plan that presumably made sense to her at the time. 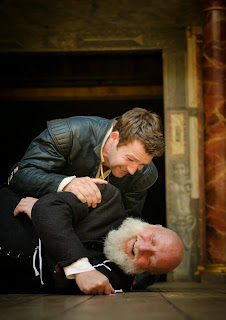 McIntyre's production opens silently with the funeral of Orlando's father Sir Rowland De Boys. It's an oddly downbeat way to start, and gave me worrying flashbacks to Sam Mendes' "I'm getting divorced so let's make the audience as miserable as I am," death-and-torture-themed production for the Bridge Project. Fortunately things cheer up pretty soon, and even if the traditional topless wrestling scene didn't quite play out as intended - we were informed that due to injury the actual wrestling would be offstage - the toplessness remained, and I don't think I've ever heard quite as loud audience disappointment as when Harrison put his shirt back on afterwards. 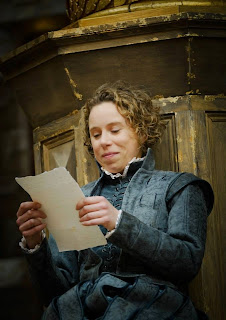 It goes without saying that Future Dame Michelle Terry lives up to her star billing; her husky voice of course makes her perfect for one of Shakespeare's gender-bending heroines. But she's also an actress who always brings a brisk, no-nonsense feel to her roles, so it's great fun to see her subvert this, especially in her earlier scenes with Celia, becoming girly and giggly in the first flush of love. 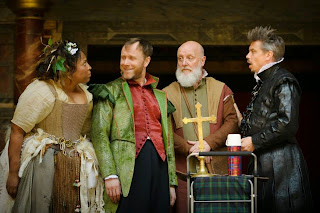 Not all the casting works quite as well: To start with Daniel Crossley gives some indication as to why Touchstone has an unfair reputation as a particularly unfunny fool, but he really comes to life when paired with Sophia Nomvete's scene-stealing, randy Audrey. Still, I couldn't help wishing it was James Garnon playing Touchstone instead of Jacques - it's inevitably a great performance, with a quirky take on the Seven Ages of Man speech, but not a role that really gives Garnon the chance to assault the groundlings in the way he so likes. 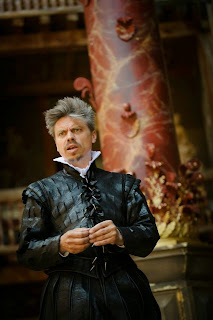 I'm also not sure why you'd cast Jack Monaghan (so handsome the other handsome men made him their president) as Silvius then stick him in a cap that hides his face from most angles. There's lots of nice little inventive touches, like Sir Oliver Martext (Phil Whitchurch) turning up with a sholley and a thermos, but they don't all mesh together: Having Gary Shelford turn up in a ludicrous outfit as the actual Hymen at the end is funny, but feels like it belongs in an entirely different production. And having Rosalind and Orlando remain several feet apart throughout their wedding scene, not even touching until halfway through the jig, is an odd and unsatisfying conclusion. Still, apart from being a bit too long this is a funny As You Like It that clearly had the crowd on its side; it's only as someone with several productions under his belt that I never felt McIntyre's production ever quite settled on its own identity.

As You Like It by William Shakespeare is booking in repertory until the 5th of September at Shakespeare's Globe.