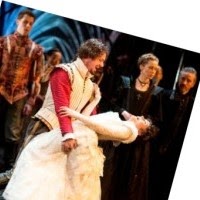 The more obscure of this summer's Swan shows have been chosen in part as a reflection of one of the main RST Shakespeares. John Ford's Love's Sacrifice, which is meant to mirror Othello, really is an obscurity: No definite record seems to exist of it ever having been revived after its 1632 premiere, until now. Matthew Needham returns to the RSC and, with no Roman Emperors available in this year's rep, has to make do with the brattish Duke of Pavy, newly ascended to power and just married to Bianca (inter-species space lesbian Catrin Stewart,) a commoner whose beauty alone he fell for. The closest thing to an Iago figure is D'Avolos (Jonathan McGuinness,) the Duke's vaguely disgruntled secretary, who plans to tell his master that Bianca is cheating on him with his best friend. Where Love's Sacrifice differs from Othello is that - thanks in part, admittedly, to D'Avolos' interference - Bianca and Fernando (Jamie Thomas King) really have fallen in love.

Although it's true that the play is laden with a great many sub-plots, not all of which feel essential, Matthew Dunster's production makes a strong case for its reintroduction into the repertoire. Apart from anything else, Ford rhymes "duke" with "puke," which is surely reason enough to stage it. 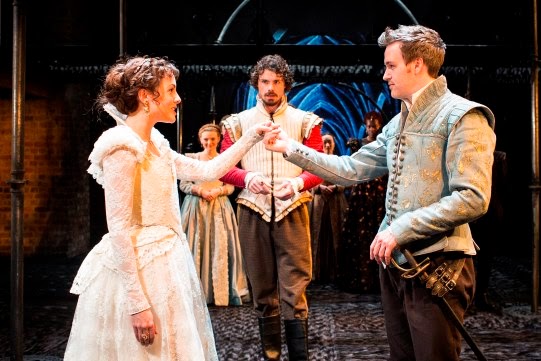 Despite everything else going on, the main thread builds gradually and inexorably. Needham doesn't get much time early on to establish the Duke's personality, but he's had enough experience playing unpredictable and deranged characters to channel into something that makes some sense of the extremes. D'Avolos sadly isn't as entertaining a villain as Iago, but the play's subplots provide the light and shade instead. 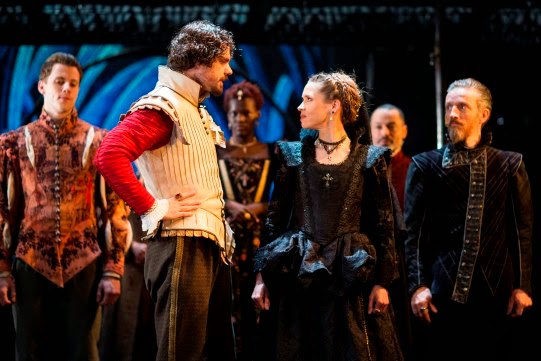 Andy Apollo (once again given a peacocking, bulky costume, when the correct costume choice for him would clearly be "none") plays Ferentes, a lothario who's charmed and knocked up half the court, and whose comic exploits turn increasingly dark until they finally turn on him. Anna Fleischle's costumes borrow from a different Shakespeare play when Matthew Kelly's Mauruccio, an ageing lord convinced he can woo the Duke's sister, appears in yellow stockings - and is later sent to a dark cell. Mauruccio and his sneering sidekick Giacopo (Colin Ryan) accidentally let love rival Roseilli (Marcus Griffiths) into Fiormonda's (Beth Cordingly) household, in the guise of a fool. Although feigned, this particular plotline is used as quite a stark exposé of the fools common in Jacobethan plays, and the time's attitudes to the mentally ill. 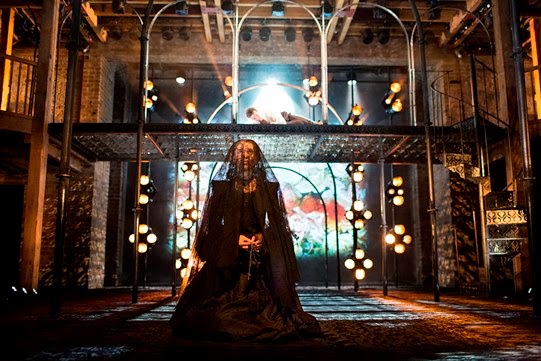 Playing out on Fleischle's gloomy perspective set, with projections that get bathed in blood whenever the characters seal their fates, Dunster's production only has a few rare moments where it flags. Though there's a few corpses by the end, there's not quite the parade of elaborate bloody tableaux of some Ford plays. Having read that, in the true story that inspired the play, the equivalent of the Duke wore his wife's nightgown to catch his rival, I was surprised Ford didn't keep that - Middleton would have been all over that shizzle. He does, though, come up with a different surprise twist to cap a play that never deserved to have got lost for so long.

Love's Sacrifice by John Ford is booking in repertory until the 24th of June at the Swan Theatre, Stratford-upon-Avon.