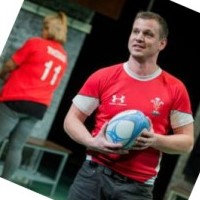 An interesting day to see Crouch, Touch, Pause, Engage, as today director Max Stafford-Clark has been interviewed for an article about how, despite great reviews, his latest touring show has played to dwindling audiences, blaming arts funding cuts for the regions losing their taste for new theatre. Of course, last year's offerings from Out of Joint were This May Hurt A Bit and Pitcairn, so people may just have been wary of getting burned a third time. Robin Soans' verbatim play (with a few reconstructed scenes) about openly gay rugby player Gareth Thomas is, though, a much better proposition; and if tonight's audience at the Arcola is anything to go by, it's coming a lot closer to filling the house on this final London leg of its tour. Gay audiences will surely find a lot of interest in the story of the first major international sportsman to come out, but Thomas isn't the sole focus of Soans' play.

In fact Thomas' home town of Bridgend is as much the lead character as he is, especially due to its other, darker claim to fame: The spate of teenage suicides, blamed on internet cults but coming down to more complex and prosaic factors, which put the town on the map for the wrong reasons. 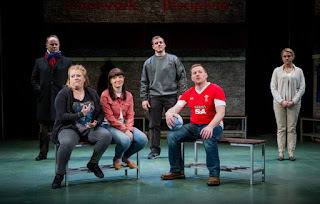 So one of the stories we follow is that of Darcey (Lauren Roberts,) a teenager who only after a number of suicide attempts got the right help to make her take her medication, and accept that she has friends - like Meryl (Katie Elin-Salt,) whose own father killed himself  - other than just the voices in her head. Meanwhile the whole cast of six take turns to play Alfie - Thomas' nickname, after ALF the alien - as his own struggles play out in a much more public way. 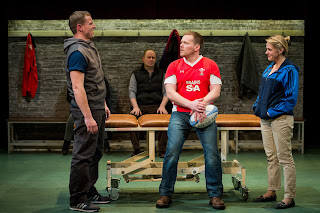 Alfie's story ends up being that the lies he tells to stay in the closet are what cause him the most pain in the end. His parents (Rhys ap William, Bethan Whitcomb) are wonderfully matter-of-fact about the highs and lows of their son's life, while the best friend Alfie thinks is a bit dim, Compo (Daniel Hawksford,) is of course much more clued up about the truth than he lets on. The way things work out for Alfie, with his coming-out making him an even bigger hero than his sporting career had, sees his return to Bridgend to help troubled teenagers like Darcey and Meryl.

Soans' seemingly detached documentary play is actually very good at bringing out the emotion of the situation, as well as the warmth that Alfie and Darcey can't quite see their loved ones have towards them (in fact Crouch, Touch, Pause, Engage is in general a good example of how verbatim theatre can be moving without being sentimental.) But the play is also determined to look at the deaths in Bridgend away from easy scare headlines about online suicide cults, and see the long-term damage done by '80s politics that left the town without an identity. Bringing the themes full circle, its greatest remaining bond as a community is bound up with rugby. We get commentary from, among others, Neil Kinnock (Patrick Brennan) about how the community is trying to re-establish itself. 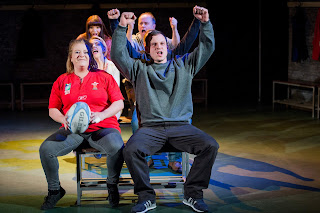 Stafford-Clark's production keeps its energy levels up with the cast putting on one of Thomas' rugby shirts - a different design from across his Wales international career for each actor - and tossing a ball to each other when it's their turn to play Alfie, and switching quickly between its various strands. There's impressive turns from Hawksford and newcomer Roberts, and a script that effectively juggles a lot of themes from the personal to the political. A shame more people didn't take the opportunity to catch it on tour, but there's still plenty of time to make up for that if you're in London.

Crouch, Touch, Pause, Engage by Robin Soans is booking until the 20th of June at Arcola Studio 1.