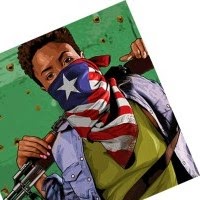 The second show in London this year to deal with girl soldiers in Liberia's succession of civil wars, Danai Gurira's Eclipsed is the more powerful piece in the way it brings a brutal conflict to a domestic level. While horrors keeps going on outside daily, a fragile, compromised kind of domesticity exists in quarters of a rebel compound, where the warlord's wives live in a strict hierarchy based on the order in which they arrived. The Girl (Letitia Wright) has been hidden away by Helena, aka Wife #1 (Michelle Asante,) but she's soon discovered and enlisted as Wife #4, to be used for sex by the C.O. as he pleases - although at least that means she isn't readily available to the whole camp. While Wife #3, the pregnant Bessie (Joan Iyiola,) is worried that the C.O. no longer wants to have sex with her as often as he used to, however much she adapts to their domestic setup, the Girl can't get used to that.

An alternative seems to be offered by the #2 wife who went rogue: Maima (Faith Alabi) has joined the soldiers, seemingly on her own terms, fighting and profiting from the carnage, occasionally returning to show off her spoils. She sees the Girl as a potential new recruit. 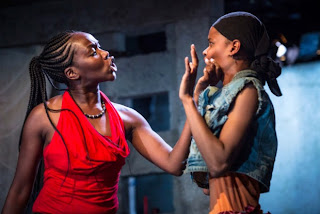 Gurira uses the hierarchy to quickly create an almost sit-com setup between the women, who call each other by number - those who've been there longest can sometimes even take a while to remember what their original names were. The characters' well-drawn, distinct personalities, and the use of humour throughout, make it easier to quickly empathise with the women, than if we'd been presented starkly with the horrors just outside their home. They live in a sort of bubble of imagined security, that's occasionally broken when the C.O demands his privileges. 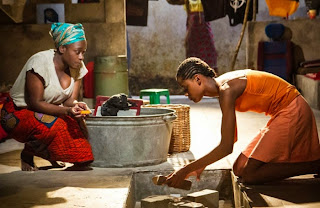 The play is in a way a fight for the soul of the educated, initially naïve Girl, with T'nia Miller completing the cast as Rita, a peace worker who commands a surprising amount of respect from the warlords. Eclipsed is at times brutal but never not completely involving, and its light touch helps two hours on a heavy subject pass disarmingly quickly. Caroline Byrne's production, on a set by Chiara Stephenson that drops the audience right into the action, doesn't waste a moment; and the performances are uniformly terrific, giving the women distinct personalities from the off so we soon care about what happens to them. This is an almost perfect production that brings a distant tragedy to life.

Eclipsed by Danai Gurira is booking until the 19th of May at the Gate Theatre.