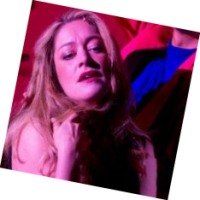 Famous flops are, of course, often revived years later to great acclaim, so that isn't what kept me away from Shock Treatment so long - especially since Julie Atherton leads the cast. But the King's Head's scheduling of the show at 10pm or midnight showings put me off until now, when the show's success has seen its run extended, and I could make a Sunday matinee performance. Richard Hartley, Richard O'Brien and Jim Sharman's sequel to The Rocky Horror Show took the opposite path to the original by being made into a film first - it was a critical and box office failure, meaning it hasn't turned up on a stage until now, with a new book by Tom Crowley. Brad (Ben Kerr) and Janet (Atherton) are now a married couple settled into small-town American anonymity, but Brad losing his job and Janet becoming the breadwinner has put a strain on their marriage.

The typically deranged solution is to appear on a series of TV shows on a local station run by Farley Flavors (Pete Gallagher*.) He and quack psychiatrists Cosmo (Adam Rhys-Davies) and Nation McKinley (Nic Lamont) are determined to give Brad electric shock treatment live on air under the pretense that his marital problems are psychological; they're cranking up the power to put them all into the TV history books whether they cure him or kill him. 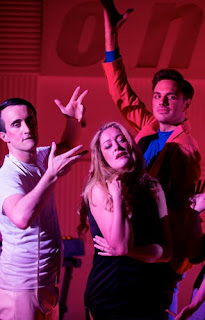 I must admit to not having seen the film, but if Benji Sperring's production is anything to go by, apart from the same lead characters Shock Treatment has a personality distinct from Rocky Horror. The exception is "Little Black Dress" which, although fun in itself, feels a bit like an attempt to recreate "The Time Warp" for the sequel. But aside from that Hartley's music tends to have a surprisingly Country & Western feel to it, with Brad and Janet's early duet "Bitchin' in the Kitchen" a particularly strong number (whose tune was still popping into my head on the way home despite a number of songs having followed it.) 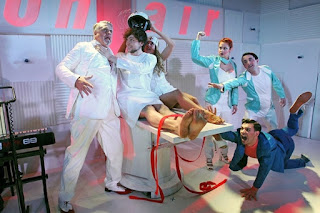 The camp value hasn't been dialed down though, with TV host Ralph Hapschatt (Mateo Oxley) protesting his heterosexuality while dry-humping Farley, his ex-wife Betty (Rosanna Hyland) turning Nancy Drew when she gets fired from the nextwork, and most of the audience getting at least some awkward interaction with the cast: As well as a couple of actors ending up on my lap, at one point Atherton took my glasses off me and cleaned them on her chest. 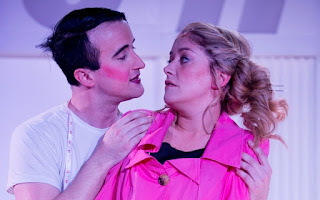 So Shock Treatment may never have captured the public imagination in the way its predecessor did, but in this small-scale version it's deserved to capture the fringe in the way it has. Atherton is of course as always the perfect mix of wide-eyed innocence with a wicked glint of naughtiness, so you couldn't ask for a better Janet. Kerr's Brad matches her well - it's a shame that after the first couple of scenes he gets wheeled offstage for most of the show, but at least when he finally returns he spends most of his time in just tighty-whities - there are worse ways to end a show.

Shock Treatment by Richard Hartley, Richard O'Brien, Jim Sharman, Tom Crowley and Alex Beetschen is booking until the 6th of June at the King;s Head Theatre.

*replacing Mark Little who'd already committed to The One Day of the Year when the Shock Treatment run extended, but who still appears in the publicity photos
Posted by nick730 at 17:52