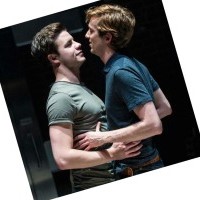 It's been seven years since we last saw a play by Christopher Shinn in London - he had a big hit with Now or Later, which gave Eddie Redmayne a career-boosting role. That play's themes of political ambition and high-profile young gay people are also present in his new play Teddy Ferrara, and Shinn's return has also coaxed back director Dominic Cooke, who's been off the radar since leaving the Royal Court. Hildegard Bechtler's set design turns the Donmar stage into a functional meeting room in a modern US university campus building. But this is a space for impassioned arguments rather than coursework, because most of the students we meet are particularly driven and ambitious, with a high profile on campus. The central character is Gabe (Luke Newberry,) the leader of the college's LGBTQ group. His best friend Tim (Nathan Wiley) is the student president, and Gabe has been persuaded to run for the post himself in his Senior year.

He's also just started a relationship with the ridiculously hot, but also ridiculously needy Drew (Oliver Johnstone,) the editor of the student paper, who's got a scoop planned: A popular student who committed suicide the previous year may have done so because he was in the closet. 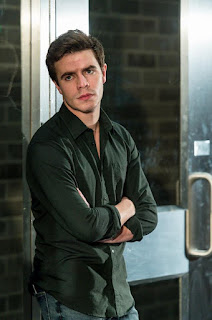 This news lends a new urgency to the group's discussions on how big a problem homophobic bullying is on campus, and how best to tackle it. Teddy Ferrara is quite an odd play - in part it does consist of a series of arguments between idealistic students and the faculty members who have to find a compromise between ambitious change and budget restrictions; the discussions feel quite real and had the potential to be very dry. On the other hand the personal stories are quite soap-opera like: There's a distinct touch of the Hollyoaks - in a good way - to the amount of pretty gay boys having overwrought relationships in various combinations. It's an odd combination but for the most part it works, the two tonal extremes of the play balancing each other out. 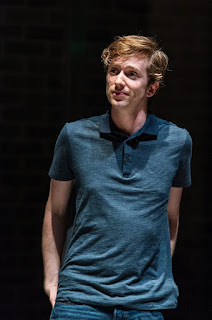 The fast-paced, soapy style of drama means Shinn can throw in a number of different issues without the play feeling bloated by them: From a transgender anarchist impatient for change (Griffyn Gilligan,) to questions over why Tim keeps talking about wanting to cheat on his girlfriend (Anjli Mohindra,) and whether the subtext is that his own sexuality is a bit more fluid than it first appears. 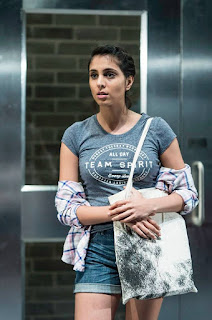 All these alpha-type personalities are balanced out by a couple of quieter figures: Where most of the characters are drawn to a public forum by their own enthusiasm, Jay (Christopher Imbrosciano) seems to have been recruited because, as a gay man in a wheelchair, he helps make the university's diversity policy look good. One of the few people not there because of a personal agenda, everyone else's good intentions don't reach far enough for them to realise he's still waiting for someone to look past his disability and find him sexually attractive. Meanwhile the titular Teddy (Ryan McParland) is an interesting contradiction: In person geeky and socially awkward, he has a secret identity online, wanking for tips on a camming website. 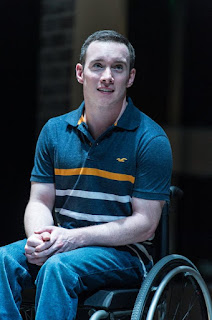 Plays full of unlikeable characters are often hard to like themselves. One sign of Shinn's strong writing is that although most of the characters display some pretty nasty traits, their story remains interesting. In fact one recurring theme of the play is the way that even when people have a selfish motive behind what they're doing, it doesn't mean they're not having a positive effect. There's also a lot of humour balancing out the play's many dark corners - much of it coming from Matthew Marsh as the university president with political ambitions, whose attempts to reach out to the college's LGBTQ population come with some very unfortunate phrasing, and who regularly clashes with Pamela Nomvete's gender studies professor. 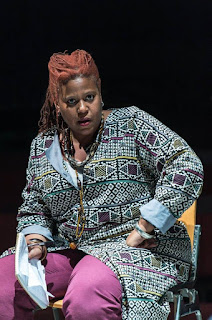 The play does end at an almost arbitrary point with a number of plot strands left hanging; arguably that's all part of it being the kind of story that's unapologetically about asking questions, not answering them, but it still leaves a touch of disappointment in the air. Still, a talented cast in a production that Cooke doesn't allow to get dragged down by the many dialogue-heavy scenes, and after last year's My Night With Reg it continues what will hopefully be a trend of the Donmar keeping LGBTQ themes in the theatrical mainstream.

Teddy Ferrara by Christopher Shinn is booking until the 5th of December at the Donmar Warehouse.