Theatre review: Richard III (The Wars of the Roses at the Rose Theatre, Kingston) 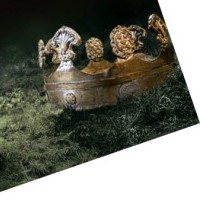 I don't know if it's John Barton's edit/adaptation or Trevor Nunn's direction (probably a bit of both,) but this trilogy version of The Wars of the Roses seems to be a lot less overtly Lancastrian in sympathy than Shakespeare's four-play original. Not that it's become Yorkist instead, but both sides of the conflict come off about equal in terms of culpability for the lives lost. Richard III is by far the most frequently performed play in the tet as it's considered something of a standalone story, but it definitely benefits in a couple of ways from being seen in context, and one of these is in a titular villain who isn't quite as villainous here: Robert Sheehan's Richard spent Edward IV as the Yorkist enforcer, doing the dirty work that'll get his family into power. Once they've got it, it turns out that the biggest obstacle to keeping it is the family themselves, so he proceeds to turn on them, killing both relatives and former allies.

This Richard is more of a pragmatist to the point of sociopathy than a panto villain, and even his young nephews are fair game. This trilogy's cast doubling has been largely practical rather than symbolic, but there is a nice symmetry to Alex Waldmann returning as a peasant who points out the perils of the country having a child king, having played one himself in Henry VI and its sequel. 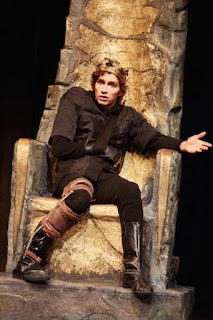 NUNNSTORICAL ACCURACY has given us an Irish Duke of Gloucester, but it has also meant an (unusually) age-appropriate one. It's a shame that we haven't actually got a more compelling lead out of it though. Sheehan seems to have thought this was an instructional video for how to play Richard III, and used it as his base note:


Fortunately even a ham that big can't keep that degree of gurning and eye-rolling up for the full three hours, but there's a subtle but important note missing throughout: This Richard has the full complement of hunch, withered arm and twisted leg, but as he drags himself around the stage I didn't get any suggestion that his multiple disabilities were actually at all painful.

Richard starts his reign of terror by framing his brother George of Clarence (Michael Xavier) for a crime that hasn't actually been committed yet (but which Richard is definitely planning to get round to.) He won't be the last, and again there's an interesting sense of having seen the full story when Henry VI's widow Margaret (Joely Richardson) arrives to curse those who stood back and let him get away with horrors that ultimately benefited them: Again, we've seen Richard doing just this in his role as York's enforcer. 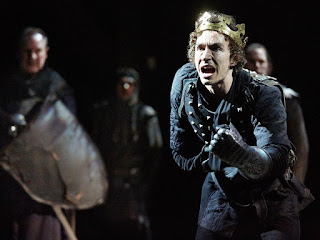 Alexandra Gilbreath's Queen Elizabeth is a bit underwhelming when she mourns her sons, but goes up a notch when confronting their murderer. As the man who will finally defeat him and end the Wars of the Roses, Laurence Spellman has an interesting take on the future Henry VII: Though a strong warrior, his addresses to his troops reveal him as calm, intelligent and reasonable, a contrast to the bloodthirsty vendettas that have dominated the last few generations of kings. 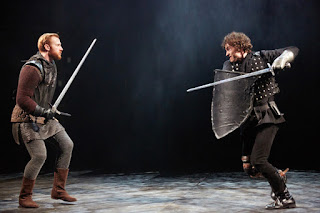 As with the rest of the trilogy, this is a decent but fairly dry production that lacks a truly charismatic lead but does make up for it by virtue of revealing him as more of a functionary, keeping the peace in a paradoxically war-like way. It's far from the strongest production of the play I've seen (Propeller still hold that title) but while nine hours of Shakespearean history is a slog, even in a fairly uninspiring set of productions it does reveal new angles on the plays.

The Wars of the Roses: Richard III by William Shakespeare, adapted by John Barton with Peter Hall, is booking in repertory until the 31st of October at the Rose Theatre, Kingston.