Theatre review: Edward IV (The Wars of the Roses at the Rose Theatre, Kingston) 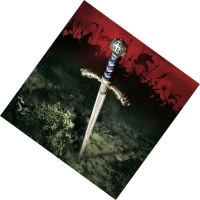 Henry VI's queen, Margaret of Anjou (Joely Richardson,) is a figure who looms over the whole of Shakespeare's second historical tetralogy - or in the case of John Barton's War of the Roses edit, trilogy. In Edward IV, the determination and strength she showed earlier in the sequence starts to reach a level of insanity that'll inform much of the climactic play as well. What kicks it off is a deal her husband (Alex Waldmann) makes in an attempt to pacify his Yorkist rivals: He will remain king to the end of his natural life, but the Duke of York (Alexander Hanson) and his sons will be his heirs. As this disinherits their son Edward (played by Freddy Carter's cheekbones,) Margaret won't stand for it; soon she's leading the charge herself, the treaty's forgotten and the wars are back on, bloodier than ever. York won't live to see the crown himself, but it will pass back and forth between Henry, and York's son Edward IV (Kåre Conradi - for the sake of NUNNSTORICAL ACCURACY the king of England is Norwegian.)

Trevor Nunn's production uses the tired marketing trope of calling The Wars of the Roses "the original Game of Thrones," (the throne design even has swords sticking out of it) so you'd think they could at least have used a bit of Kensington gore. But like the preceding Henry VI this is one of those bloodless bloodbaths I find frustrating. Actually if they were really going for a GoT feel there's definitely way too much clothing on the actors, a shame when there's plenty of good-looking newcomers in the cast. 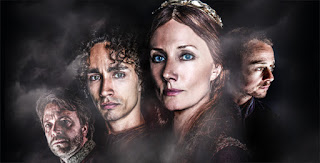 If not everything looks the way I would have hoped, Mark Friend's set design, from an idea by John Napier, is a gloomy, towering three-level structure of distressed wood, and the events that unfold on it feel a bit more focused in this second play, even if the action is still frantic. And there's moments for a more emotional connection - Waldmann again the production's biggest asset in the scene where Henry sits on a molehill and observes a son who killed his father (Oscar Batterham) and a father who killed his son (Jim Creighton) after chance put them on opposing sides of the conflict. 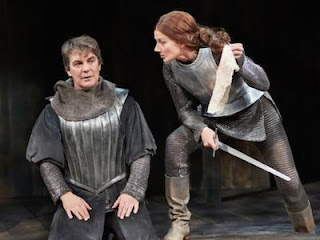 There's also a touch more humour, as Edward woos the widow Elizabeth Grey (Alexandra Gilbreath) so cack-handedly she think he's trying to make her an overnight conquest. But even this has tragic results when his marriage offends the French king Lewis (James de Lauch Hay,) making a new foe of him and allowing the Lancastrians a chance to restart the fighting. 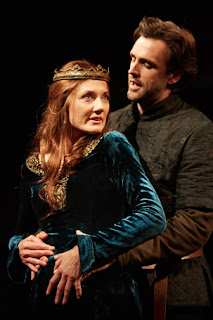 I don't want to harp on about the whiter-than-white casting but maybe a bit more diversity would have made it easier to differentiate between the characters, and not need quite such desperate measures to signal the role doubling: Hanson putting on a Malibu Barbie wig to play the Duke of Buckingham being the obvious case. Still, the midway point of the trilogy is an improvement, although as it also charts the rise of Robert Sheehan's Richard of Gloucester, so hammy he's been banned during Ramadan, it does leave me nervous about how his own play will turn out for the finale.

The Wars of the Roses: Edward IV by William Shakespeare, adapted by John Barton with Peter Hall, is booking in repertory until the 31st of October at the Rose Theatre, Kingston.