Re-review: In The Heights 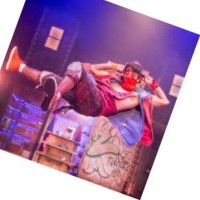 After a sold-out run at Southwark Playhouse last year, Luke Sheppard's UK premiere of In The Heights was widely rumoured for a transfer. It's taken nearly 18 months to happen, but the timing may be fortuitous - as a London audience eagerly awaits the latest Broadway smash Hamilton to make it across the pond, Lin-Manuel Miranda's earlier show is an exciting alternative, and as the limited run has already announced an extension it seems to be doing well in its new home. That home is the King's Cross Theatre, a disused platform of the train station, converted specially to house an adaptation of The Railway Children. So the show has been restaged to suit a larger, traverse stage, but Drew McOnie's memorably energetic choreography has settled in well, with a lot of the original cast also returning.

These include Sam Mackay as Usnavi, David Bedella and Josie Benson as the Rosarios, Eve Polycarpou as Abuela Claudia, and Victoria Hamilton-Barritt as the gossipy hairdresser Daniela - although whether she'll make it to the end of the extended run has to be debatable, since she seems to get more pregnant by the scene, and at times you could practically see the baby kicking from the back row. 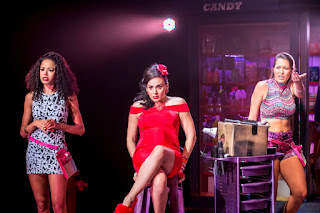 The most high-profile of the newcomers to the cast is Jade Ewen, who served a term with the Sugababes, as Vanessa; but probably the most impressive is Lily Frazer, in strong voice and likeably conflicted as Nina, the girl whose "escape" from Washington Heights hasn't worked out quite like everyone expected. 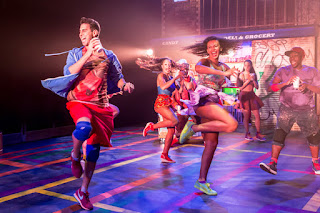 Otherwise this is very much the same, very catchy, lively and warm show as last year but with a few bonus touches - including a visually impressive new sequence during "When You're Home" which sees Nina and Benny (Joe Aaron Reid) spun around the stage on fire-escape stairs on wheels. I went to In The Heights twice last year, when it ended up being my favourite musical of 2014; it's lost none of the qualities that put it there.

In The Heights by Lin-Manuel Miranda and Quiara Alegría Hudes is booking until the 3rd of January at the King's Cross Theatre.