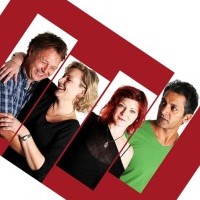 Like many of the Pulitzer winners I've seen before, Dinner With Friends - Donald Margulies' play won the literary prize in 2000 - concerns itself with middle class American couples spending time in each others' homes. Unlike the others, it isn't actually about racism, or indeed any subject larger than the relationships we see on stage. Food writer Gabe (Shaun Dooley) and his wife Karen (Sara Stewart) are having a friend and her children round for dinner, giving her a blow-by-blow account of their recent holiday in Italy. It's not the relentlessness of their narrative that makes Beth (Finty Williams) suddenly burst into tears though: She said the reason her husband didn't join them at the dinner party was that he was away on business, but in fact he's left her for another woman, and they're now planning to get a divorce.

When Tom (Hari Dhillon) unexpectedly turns up in Beth's bedroom later that night, he's furious: His wife got to their friends first, so they heard her side of the story and may no longer want to hang out with him. 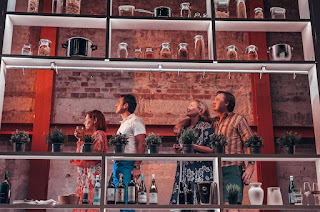 While the subject of couples breaking up is a common one in drama, Dinner With Friends has found an angle that, while real - Jim said in the interval that he could relate to the story - isn't often made the central issue: Where the friends of a couple stand when they get divorced, especially when they consider themselves close to both partners (here, Gabe and Karen were actually the ones who originally introduced Beth and Tom.) 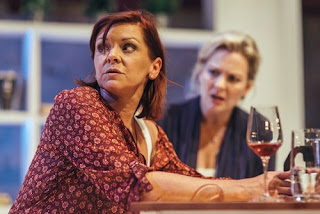 The first act is largely concerned with how the divorcing couple themselves try to jockey for position with their friends. The second, which actually opens with a flashback to them setting their friends up with each other*, sees Gabe in particular question if the revelations about people who've been such a major part of his life for so long, has some bearing on his own marriage. As it turns out he concludes it doesn't, but Tom seems to almost wish that it did. (One positive about the show is that it gives plenty to talk about: Tom doesn't want Gabe to offer any comments on the great new life he says he now has; Jim and I concluded what he really wanted was for his friend to be jealous of him, and was a bit put out when he wasn't.) 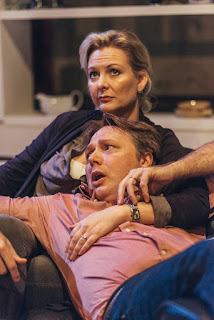 In many ways Tom's lack of likeability feels like a flaw with the play; although we're often told Beth isn't as blameless as she makes out, the actual details are withheld from us until too late for it to really affect the story. And although there's some nicely observed funny moments early on, these do fade after a couple of scenes and the play ends up feeling like it takes itself a bit too seriously given its concerns are very narrow. Margulies' play has dated somewhat in that respect, but Tom Attenborough's production has a sterling cast that makes the best of the material, as well as an impressive set from David Woodhead that helps the small cast make the many scene changes comparatively briskly. The knowledge that this won a Pulitzer perhaps raises expectations that mean Dinner With Friends feels surprisingly slight, but it's still an interesting evening if not a groundbreaking one.

Dinner With Friends by Donald Margulies is booking until the 28th of November at Park Theatre 200.

*maybe these kinds of scenes should have a compulsory "12 years earlier" caption projected, because a couple of minutes in when it became apparent this was a flashback, the entire audience seemed compelled to explain this to each other. "OH! THIS IS IN THE PAST!"
Posted by nick730 at 23:21