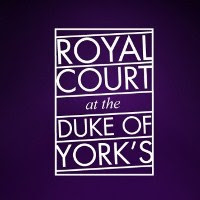 I'm not calling this a review as this was a one-off rehearsed reading, not a full production. While the Royal Court are at the Duke of York's Theatre, they're holding a short series of Friday afternoon readings they're calling "Playwright's Playwrights." Four Royal Court playwrights each select one of their favourite plays, and direct a rehearsed reading of it. First up is Nick Payne, who chooses Kenneth Lonergan's The Starry Messenger, which hasn't actually had a UK production yet. Set in mid-90s New York, just as a beloved old planetarium is about to be demolished and replaced with a shiny new one, it charts a brief affair between a married astronomy lecturer and a single mother. Mark (Ben Miles) teaches a weekly evening class in astronomy for beginners, his rather dry lectures punctuated by laughter from the neighbouring classroom of his more charismatic, proactive colleague Arnold (Felix Scott.) His life at home with wife Anna (Monica Dolan) seems about as lifeless as his classes. Then trainee nurse Angela (Daisy Haggard) visits the planetarium to find out about classes for her young son, and the two strike up a relationship.

Payne's cast have only had since yesterday to rehearse, but the fact that it's not a fully-fledged production is balanced somewhat by their still finding their way around the material freshly as you watch: Actors often talk about how lines surprise you when first put in front of an audience; this afternoon you could see it happening, Miles' surprise evident when a dry line got a much bigger laugh than he was apparently expecting. The play's full of these drily amusing lines, as well as a couple of broader comic characters in Mark's students from hell (Alexis Zegerman and Harry Melling.) Meanwhile Angela's search for someone to connect with also leads her to flirt with and confide in a dying cancer patient (Richard Bremmer) at the hospital.

You can see from The Starry Messenger how Lonergan might be an influence on Payne's writing; his use of scientific theories as a backdrop to exploring human relationships has parallels with what Payne did in Constellations. It made for a very entertaining afternoon listening to a strong play - a sudden lurch towards tragedy near the end feels very abrupt but perhaps might not so much in a full production. The play's subject matter lends itself to a production that exploited interesting visuals, so all praise to the cast for bringing it to life without them, sitting in a row, reading from scripts, after only a day of preparation. And well done to the casting agents (Amy Ball and Lotte Hines) for not just assembling a cast of familiar faces for such a small-scale event, but also one that all came with their American accents ready to go (and much better than some I've seen in fully-rehearsed shows with dialect coaches.)

The Starry Messenger by Kenneth Lonergan was part of Playwright's Playwrights, which is booking on Fridays until the 20th of July at the Duke of York's Theatre.

Running time: 2 hours 30 minutes, including interval. (The length, and the fact that it was so long it needed an interval, kind of took us by surprise as I've never seen it before in a rehearsed reading. But then, most of the rehearsed readings I've seen have been works-in-progress, not completed plays.)
Posted by nick730 at 17:19