Theatre review: The Rest Is Silence 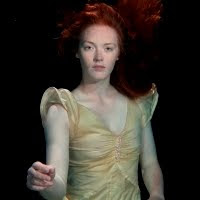 The latest radical reworking of a familiar text as part of the World Shakespeare Festival, dreamthinkspeak's The Rest Is Silence is a "meditation on Hamlet" (I know, but achingly pretentious publicity doesn't always mean an achingly pretentious show; just most of the time.) A promenade production, it puts the audience in the middle of a room surrounded by glass screens, like an aquarium. The tanks behind the screens light up in turn to reveal an Elsinore conceived as a gleaming modern luxury apartment. (There's also a persistent smell of rotting rubbish, but I don't think that's part of the design, just that Riverside Studios has the audience enter via an alley by the bins.)

The show opens with Claudius (Phillip Edgerley) in his bathroom the night before his first scene in the play, rehearsing his opening speech and perfecting how to present himself as the new king. Tristan Sharps' production, which uses Shakespeare's text but cuts a lot and moves a lot of scenes around, takes a particular interest in what happens behind closed doors: Instead of seeing Hamlet's first encounter with them, we see Rosencrantz and Guildenstern (Michael Bryther and Stewart Heffernan) rehearsing their line of questioning beforehand; then afterwards, sneeringly reading back the notes they've made of Hamlet's philosophical replies.

If it had focused more on this Stoppard-esque exploration, The Rest Is Silence would have been a different, and perhaps better show. As it is, it then attempts to tell the story (or as much of it as is left) and the fracturing of the text makes this a losing battle - I doubt anyone unfamiliar with the story beforehand could have summarised it afterwards (which means someone, somewhere, will definitely recommend this as the perfect introduction for newbies.) Scenes are mixed together, so the closet scene and the confrontation with Ophelia (Bethan Cullinane) are a single scene, meaning Hamlet tells Gertrude (Ruth Lass) to get herself to a nunnery. And Gooldian overlapping scenes on different sets are an irritant in promenade staging, with the audience constantly needing to move around.

It feels a bit as if Sharps wants to tell the story of Hamlet without Hamlet himself, which again raises a more interesting prospect that what we get: The character of Horatio has been excised, as have most of the soliloquies, meaning Hamlet is very much internalised, and Edward Hogg has little of the character's fascinating variety left to play with, just a greasy, almost-silently sulking student. Much of the production does avoid the threatened pretentiousness, although the video segments come closest to pseuds' corner; not that I'm complaining about a video segment of Ben Ingles' buff Laertes working out, but I'm not sure why it was there. And at nearly two hours of standing, the show does sometimes try the audience's patience - 90 minutes in and with my back starting to hurt, I could have done without Rosencrantz and Guildenstern endlessly, sniggeringly rearranging the words in "To be or not to be" to create new meanings.

So a frustrating show, whose weaknesses I've perhaps focused on more than its strengths; but while I'd have liked to have seen a straight telling of Hamlet in this infrequently-seen staging style, or a deconstruction of the story beyond the protagonist's viewpoint, The Rest Is Silence is a little bit of both, and ultimately neither.

The Rest Is Silence, based on Hamlet by William Shakespeare, is booking until the 23rd of June at Riverside Studio 2; then from the 26th to the 30th of June at Northern Stage.