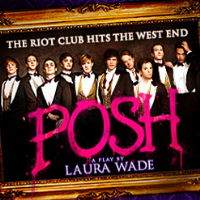 I saw Laura Wade's Posh when it was first performed at the Royal Court in 2010, and despite not being entirely sold on it at the time, booked again for its belated West End transfer: Two years ago the story of an Oxford "dining" club for the incredibly rich and privileged was seen in the context of the election, and the people who were likely to soon be running the country; I was interested to see how the play bears up in the hindsight of two years with those people in charge. Despite the long gap in transferring, six of the original 10 members of the Riot Club have come along to the Duke of York's (including Joshua McGuire, interestingly opting to reprise this instead of his Globe Hamlet from last year; maybe a summer in the West End was more appealing than another regional tour.) They're joined by Max Bennett as Harry, Pip Carter as Hugo, Edward Killingback (Yeah!) Them Motherfuckers Don't Know How To Act (Yeah!) as Miles and Harry Lister Smith as Ed. The club have had to take a few terms off after Toby (Jolyon Coy) got careless and their exploits made the papers. Now they're determined to pick up where they left off with their once-a-term tradition: A private dinner in a village gastro-pub, topped off by trashing the place, and throwing cash at the landlord to keep quiet about it. 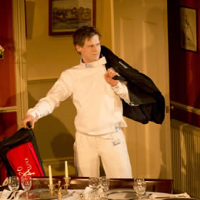 Although it's hard to separate from the politics, essentially Posh is a class comedy. Wade has slightly updated the text to reflect the Coalition being in power (as well as updating the pop songs the cast sing during scene changes) but if anything the members feel even more short-changed than before, as there's still the occasional whim of theirs that's not being catered for. One difference I noticed has nothing to do with the play, but with the audience - at the Court I had the uncomfortable feeling that many in the audience were laughing with the characters' complaints about those horrible commoners who think they're entitled to visit their stately homes just because they're paying to keep the roof on. Tonight's audience seemed much more to be laughing at the extreme characters Wade and director Lyndsey Turner have put on Anthony Ward's simple but effective set. 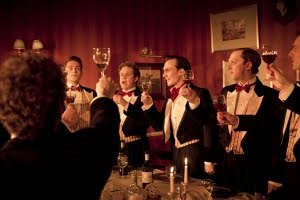 Though there's a few too many characters in the Riot Club for them all to stand out they get their moments - Killingback and Lister Smith are the club newbies, trying too hard to impress; Tom Mison's James, president of the club is, I guess, the Cameron figure, making tiny concessions to the reality of the world that some in the club still consider too much; Richard Goulding the one whose family have fallen on (comparatively) hard times; while the re-writes mean Greek shipping magnate's son Dimitri (Henry Lloyd-Hughes - that slicked-back hairdo does not do his hairline any favours) gets a whole new strand of topical ribbing. The central figure remains Leo Bill's Alistair, the most viciously contemptuous towards anyone of a different class. Steffan Rhodri provides the club's nemesis as the landlord who values his self-respect over their money, Jessica Ransom as his daughter is also good, and Charlotte Lucas has a memorable cameo as the prostitute who could teach the boys a thing or two about what it is to have class.

Posh remains entertaining and sometimes disturbing, but didn't change my mind about its structural flaws - the first act is nearly 90 minutes of treading water, albeit entertainingly, as we lead up to an inevitable crisis. The play's coda, though, now feels less chillingly prophetic, more depressingly inevitable. As something with a lot of amusing moments and a bit more social commentary than most shows in the West End, even if Posh is flawed it's good to see it apparently doing well.

Posh by Laura Wade is booking until the 4th of August at the Duke of York's Theatre.