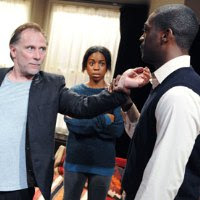 The Royal Court has been in the news for all the wrong reasons in the last week, what with the Jez Butterworth debacle, and them freezing their loyal friends and members out of advance bookings for £10 Mondays Upstairs (look out for the next podcast to find out how much of my extended rant on the subject made the cut.) It's a shame that this rather overshadows a prime example of how the theatre got such a loyal fanbase in the first place, in an Upstairs play about a difficult subject, but one which creates one of the most compelling human dramas on the London stage at the moment. Following her hit debut Mogadishu¹ last year, Vivienne Franzmann's second play The Witness looks at the world of war photographers, people who bring atrocities to the attention of the wider public, but at a cost both to themselves and the victims. It does so through an intimate family drama, Lizzie Clachan's ingenious in-the-round set putting the audience by the walls, behind the bookcases and up the stairs of a North London family home.

Joseph (Danny Webb) is a retired war photographer, his days now filled with Loose Women and the occasional gig photographing weddings. One of his most famous pictures was of an orphaned child crying over her dead parents during the Rwandan massacre. Joseph rescued and then adopted Alex (Pippa Bennett-Warner) and she is now about to return from her first year at Cambridge. But Alex has been trying to figure out where she fits in to the world, and her exploration of her African roots throws up a surprise in Simon (David Ajala,) the older brother she never knew about, and whom Joseph had left for dead. Being older, Simon remembers things about that day that Alex doesn't, and her father sees his reappearance as a threat to his own family.

One of the most notable things about The Witness is how utterly convincing the family relationships are. I have to make sure I mention Franzmann and director Simon Godwin's contributions to this, as it's easy to be blindsided by how good Webb and Bennett-Warner are: I can't think when I've seen a more believable father/daughter relationship on stage, from their bickering, to their in-jokes, to reminiscences and her fussing over his poor diet, within the first quarter of an hour I was already invested in their relationship and wanting to know where their story was going. That Ajala manages to make an impact on the bond they've made with the audience is praise enough, let alone his developing a convincing relationship of his own with his new-found sister. His wife having died a couple of years ago, Alex is all Joseph has left, and he's kept certain things from her for fear of it alienating her. Of course, her brother will be the catalyst for it all coming out anyway, and the audience's investment in the father and daughter in the first act makes it heartbreaking to watch the fallout when Simon arrives after the interval.

The family drama still leaves room for an exploration of the morality of photographing atrocities, and Webb is a strong enough actor that even as his more amoral actions come to light, you don't lose touch with his own point of view. My one criticism with Franzmann's play would be in the structuring of how the story comes out, Simon always seems to have one more horrible secret of Joseph's to blackmail him with, and by the end the format gets repetitive. But it's a minor point in an exceptional piece of work, with stunningly memorable performances.

The Witness by Vivienne Franzmann is booking until the 30th of June at the Royal Court's Jerwood Theatre Upstairs (returns and day seats only.)