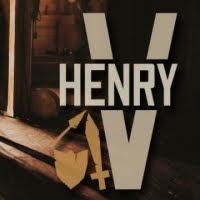 Two years ago Dominic Dromgoole directed a pair of Henry IV plays at Shakespeare's Globe that were among the best productions of those plays I've seen, and which made it into my top ten shows of 2010. It was no secret at the time that Jamie Parker, who played Prince Hal, was keen to continue the character's journey as Henry V, and he now gets the chance to show us what kind of king his Hal became. The good news is Parker is a fantastic Henry, his biggest strength the big speeches that he gives a genuinely rousing quality, making this a leader people would plausibly give their lives for. The bad news is that he's giving this performance in a production that gets utterly bogged down in the multiple military campaigns and abortive attempts at diplomacy that make up the play's action.

Prior to opening at the Globe this production toured and this may explain why, unusually for a show from the venue's artistic director, this Henry V rarely makes interesting use of the unique venue's quirks and strengths. Dromgoole's never been one to make massive edits to the text, and with a pretty straightforward telling of the story we're left with the play at its most basic: A very episodic affair that doesn't coalesce here into something we can care that much about. The closest thing to a high concept is casting the Chorus (Brid Brennan) as a servant woman who has to clean up after the men, but since the Chorus' speeches are the most tubthumping of all I'm not sure what point this made. 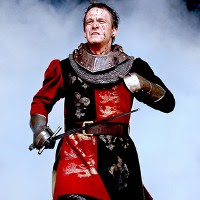 Parker (who as a Globe regular is also the only one to find a way of bringing the venue's traditional interaction with the audience into his performance) brings an energy to his scenes that's lacking elsewhere. It would be unfair to say things fall apart every time he's absent, as there's a nicely-developed relationship between Matthew Flynn's Gower and Brendan O'Hea's Fluellen, while Olivia Ross and Lisa Stephenson are entertaining as Katherine and Alice in the English lesson scene. Ross also does well opposite Parker in the final scene of disastrously awkward courtship, the soldier-king losing all his previous bravery when faced with a different kind of battle. Unfortunately this scene is preceded by a speech from the Duke of Burgundy which Paul Rider gives an interminably slow, monotonous reading from which all meaning has been leeched out, so by the time we get to the funny courtship we're just desperate for the whole thing to end. Henry V looks to be to 2012 what The Tempest was to 2011, with multiple different productions on each other's heels. I hope one of these upcoming productions reminds me of why I've enjoyed the play in the past, as this sadly isn't going to do it: Jamie Parker gives a barnstorming performance that's frankly better than the dull production around it.

Henry V by William Shakespeare is booking in repertory until the 26th of August at Shakespeare's Globe.