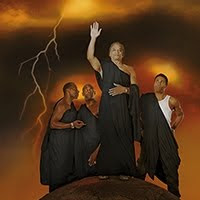 Though I've seen the odd good production, Julius Caesar has never been one of my favourite Shakespeare plays. There's an awful lot of surreptitious plotting, and for years all attempts to get away from the play's togas-and-sandals image seemed to turn the conspirators into identikit business-suited politicians. In recent years slightly more diverse interpretations seem to have been given a chance again, and Gregory Doran, in his penultimate RSC show as Chief Associate before he officially takes over as Artistic Director, turns Rome into a turbulent African nation. The set is a town square whose concrete seems to have had some bomb damage, overshadowed by a huge statue of Caesar. A community chorus has been enlisted to help fill the stage, and as we enter the party is in full swing, celebrating his victory over Pompey.

Where the production is particularly strong is in differentiating between the conspirators, who can often come across as a nameless mass in the earlier parts of the play. But here we can see the differences in personality between Cyril Nri's instigator Cassius, Paterson Joseph's jittery Brutus, and Joseph Mydell's sardonic Casca. Where I've never hugely rated Doran is in imaginatively staging individual scenes, and the gradual adding of more conspirators to the cause, and discussion over the dangers of letting Caesar live, are rather flatly, boringly presented. But the scene building up to the assassination is a nice moment of seething tension, although considering it's done with machetes the stabbing itself is disappointingly bloodless, at least until the script actually demands that the actors cover themselves in Kensington Gore.

The overall picture left by the production is a positive one though. In this staging (played straight through without an interval) the story becomes one about the cyclical nature of dictators being being dethroned and replaced by someone just as bad. Even as Pompey's defeat is still being celebrated, Caesar's overthrow is being plotted. Meanwhile Ray Fearon's Mark Antony is the consummate politician, his rendition of the "Friends, Romans, countrymen" speech making clear how he's manipulating the crowd. The steely Antony makes for a much more worrying potential leader than Jeffery Kissoon's half-deaf Caesar, whose alleged dangerous ambition we have to take entirely on trust.

Annoyingly, after I'd already booked to see this production in Stratford, it was announced it would also play a season in London - although the Noël Coward probably won't be as good a venue for it as the RST, where the audience's closeness to the stage is particularly helpful in Brutus' soliloquies, which Paterson Joseph gives an unusual level of intimacy. As his plot backfires on him, his Brutus hides behind flippancy, even in the face of his wife Portia's (Adjoa Andoh) death. It'll be interesting though to see how his performance translates to the filmed version¹, as I've always liked Joseph more as a stage actor than on screen. Elsewhere, Simon Manyonda as Brutus' servant Lucius manages to bring a lot of personality to a fairly small part, while having Theo Ogundipe's Soothsayer stay onstage haunting most of the action adds a touch of impending doom. And I enjoyed designer Michael Vale having the Senators change into traditional African robes that call to mind the togas of the original setting, when they go to the Capitol.

Though it's not a production to make me change my mind about the play, this does end up being one of the better Julius Caesars I've seen.

Julius Caesar by William Shakespeare is booking until the 7th of July at the Royal Shakespeare Theatre, Stratford-upon-Avon; then continuing on tour to Newcastle-upon-Tyne, London, Aylesbury, Bradford, Salford, Norwich and Cardiff. A filmed version of this production will be screened on BBC Four on the 24th of June.

¹in a further annoyance, this was scheduled to be broadcast the day after my visit, the RSC in an unusual move agreeing to show the production on TV long before its run in theatres has ended
Posted by nick730 at 20:29