Theatre review: The Last of the Haussmans 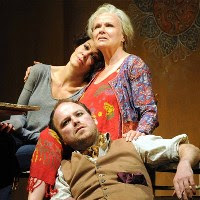 Old hippie Judy Haussman (Julie Walters) has just had a cancer scare, and Social Services have warned they're not happy with the state her house is in. Her children return to the cluttered Devon home they grew up in, but highly-strung daughter Libby (Helen McCrory) is convinced Judy has an ulterior motive: To get them to tidy up the house so she can sell it and deny them their inheritance. With its look at how a generation who said they were trying to save the world actually left it in a worse state for their children, Stephen Beresford's play The Last of the Haussmans shares some similarities with Love, Love, Love, whose final act also saw a family reunite at a Devon house in the summer. Fortunately this establishes its own identity, and ultimately a very different core of characters with their own dynamic.

The publicity for Howard Davies's premiere production of the play has inevitably focused on the cast, especially as Julie Walters has been absent from the stage for some years. And the big-name trio is very well cast, not just sparking well off each other but also making for a good contrast: Walters' warmth offset by McCrory's more acidic presence. Meanwhile Rory Kinnear provides a wildcard as Judy's son Nick, a gay former smack addict in eyeliner, nail polish, and a variety of eccentric outfits that make it look as if he's auditioning to play a slightly more Fabulous version of The Doctor. They are matched by a funny, entertaining script that doesn't quite have the emotional impact it might hope for, but does have tons of great moments. I also liked that, unlike the characters in Love, Love, Love and many other recent plays, the characters in The Last of the Haussmans don't blame everyone but themselves; they own up to the mistakes they've made, even if they have no idea how to stop making them. 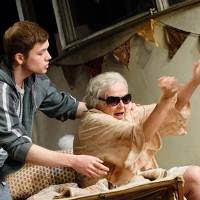 The family is completed by Libby's daughter Summer (Isabella Laughland) and two outside influences will also strongly affect the story: Peter (Matthew Marsh) is a doctor who treated Judy, and another old hippie who spends the evenings getting drunk with her and reminiscing about the '60s - but the real reason for him hanging around the house is that he's having an affair with Libby. There's also Daniel, a troubled local boy with hopes of becoming a competitive swimmer, who's been using Judy's pool every day to practice and has caught the eye of both Summer and Nick - and of the audience, who judging by the sudden collective intake of breath had much the same reaction as Nick to Taron Egerton's first appearance, crossing the stage in a pair of swimming trunks. He too, though, has his sights set elsewhere, and is willing to use some underhand tactics to get his way. 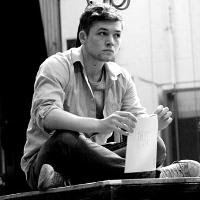 There's the occasional bit of awkward characterisation and the passage of time is rather unclear, especially in the second act, but for the most part The Last of the Haussmans is very impressive for a debut play, and on Vicki Mortimer's detailed set (complete with shrine to Burt Reynolds) the evening provides a lot of fun, with memorable performances.

The Last of the Haussmans by Stephen Beresford is booking in repertory until the 10th of October at the National Theatre's Lyttelton.