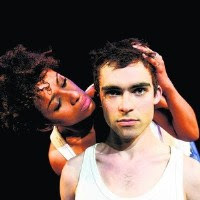 Last year I voted Philip Ridley's Tender Napalm one of my shows of the year; this year David Mercatali's production returns to Southwark Playhouse at the end of a tour. When the revival was announced, I said I hoped if both of the original actors couldn't return, that neither would, as I could more easily accept a whole new couple than Jack Gordon or Vinette Robinson trying to recreate their onstage relationship with someone new. As it happens we do get a whole new cast, Tom Byam Shaw and Lara Rossi slipping into the roles of the Man and Woman throwing Ridley's violent love poetry at each other, their dark fantasies helping them cope with a devastating loss.

The show remains an astonishing piece of work, and I found a second viewing really clarified the way its multi-layered storytelling structure works - of course the sheer amount of Ridley plays this year may have tuned me in more to his style and recurring themes (Tender Napalm does feature UFOs, but no chocolate.) I wasn't sure at first how well I'd accept the new actors, and at first I thought the sometimes hit-and-miss Byam Shaw might be pitching it a bit big, but pretty soon he and the fantastic Rossi, who speaks volumes through calm silence, won me over. The show's conclusion, where the pair's first ever meeting is re-enacted and we see the building blocks of their future coping strategy, was even more heartbreaking than I remembered. Unfortunately it proved too much so for Vanessa, who found the element of a couple losing their child too much to take; though she appreciated how good the show was, she hated it because of how much it upset her.

So a qualifier, that for some parents the way Ridley hones in on their biggest fear may make this one to think twice about; but from a purely theatrical standpoint, Tender Napalm remains breathtaking and unmissable.

Tender Napalm by Philip Ridley is booking until the 23rd of June at Southwark Playhouse.