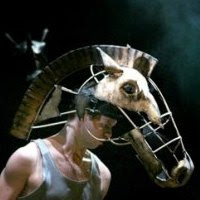 Peter Shaffer's 1973 play Equus is in part responsible for this blog's existence: I directed a few scenes from the play as part of my degree, which meant the 2007 West End revival caught my interest at a time when I'd lost my enthusiasm for theatre. That production helped spark that enthusiasm again, perhaps a bit too much so since here we are with me almost physically addicted to theatre. Michael Cabot's touring production for London Classic Theatre originally ran last year, but was well-received enough to be revived with most of the same cast, and this time the tour takes in my neck of the woods so I got a chance to see another take on the play. Alan Strang (Matthew Pattimore,) a 17-year-old boy with a Saturday job at a stable, blinded six horses in the course of one night. He's referred to child psychiatrist Martin Dysart (Malcolm James) who gradually uncovers the history of sexual repression and religious indoctrination that led Alan first to create his own religion based around horses, and then to turn violently against his god.

With a touring production, Cabot is unable to copy the original production's conceit (repeated in 2007) of having some of the audience onstage; he does, though, follow Shaffer's suggestion that the whole cast should remain onstage at all times, keeping a beady, judgmental eye on proceedings. Kerry Bradley's design takes its cue from Dysart's fascination with classical Greek civilisation, the stage becoming a miniature stone amphitheatre, the horse masks done in bronze. But the plotline of Dysart's own mental and spiritual crisis remains fairly sidelined. It's interesting that, as someone who read the play and workshopped it before seeing someone else's production, I find Dysart's problems, on the page, to be the main focus of the play, but in both professional productions I've seen they've been overshadowed almost completely by Alan's storyline. The psychiatrist's own sexuality is similarly nonexistent; I've heard of productions that have suggested an attraction to Alan, but this isn't here. More evident in the text is a spark between Dysart and the magistrate Hesther, but James' performance sees him treating her as a sounding board and nothing else. Fiz Marcus, in an otherwise very flat performance, does suggest some attraction on Hesther's part, but it's clearly not reciprocated. 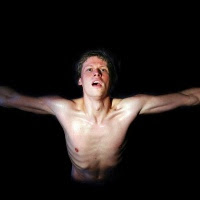 In general the productions are a mixed bag, with Pattimore's Alan, Helen Phillips' Jill and Stuart Angell's Nugget very good and James good in places but failing to find much of the self-pitying humour in Dysart. As the two leads have been touring in the show for some time now, it's a bit of a shame that they haven't found some of the subtleties in certain lines. But it's overall a strong telling of the story, and you certainly end up caring about this very childlike take on Alan Strang. The costume design is rather vague about time period, which is probably for the best in a play with a major plot point that turns on as outdated a concept as a porno cinema. The psychology quoted in Alan's therapy has also, apparently, long since been discredited. In fact I wondered just how much the play itself was showing its age, and if Shaffer's gradual reveals of Alan's past were honkingly unsubtle, but I think this may have just been my over-familiarity with the story as Richard, who didn't know the play going in, didn't find that the case. Of course the play is largely famous for a reason unrelated to how good it is, and I'm sure one of the reasons Richard wanted to come along was that he's fallen way behind Andy in the onstage male nudity stakes, and Equus notoriously has a
FULL-FRONTAL MALE NUDITY ALERT
(I did pre-warn him that there's also a
SEVERE VADGE WARNING!
in case he was traumatised by such things.) Obviously I'm in no way someone who would use my review to make physical comparisons between Pattimore and the previous Alan, Daniel Radcliffe¹. But it's fair to say that in many ways Pattimore gives a bigger performance. And his performance is less hairy, and has a foreskin. Whereas Radcliffe's performance concentrated more on the issue of having MASSIVE BALLS. But you know, these are just creative differences in how two actors might approach the same role.

As happens sometimes, I may have got slightly distracted from the matter at hand. I really don't want to compare this too much to Thea Sharrock's production as each stands on its own, but given how spectacularly the scene of blinding the horses was done then, it's particularly disappointing that Cabot here opts to go for a blackout and sound effects instead of showing it; even in the absence of another version to compare it to, missing out the climax of Alan's journey is surely disappointing. But otherwise, this is a solid production with a couple of very good performances, of a play that's starting to rather creakily show its age, but does still have enough inventiveness and power at its core to make it worth reviving. (And though it's rare for us to agree in such matters, Richard and I both thought we'd rather have seen Stuart Angell get his kit off. According to the programme he's been Joey in War Horse before, so horses would appear to be a specialty; maybe he can do Epsom Downs next.) 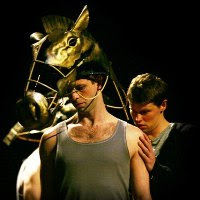 Equus by Peter Shaffer is booking until the 30th of June at Greenwich Theatre; then continuing on tour to Welwyn Garden City, Maidenhead and Frome.


¹except judging by the majority of Google searches that lead to this blog, that is precisely what people expect to find here, can you imagine!
Posted by nick730 at 22:50