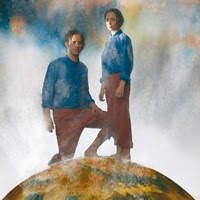 It feels like so long since I saw a good Twelfth Night (the last one I really enjoyed was Michael Grandage's Donmar West End production in 2009) that I was starting to wonder if I'd completely imagined ever liking the play. So I was hoping for something special from David Farr's production for the RSC, currently visiting the Roundhouse as part of the "What country friends is this?" season. In rep with The Comedy of Errors and The Tempest, they're also calling the season Shakespeare's Shipwreck Trilogy (the RSC having realised Shakespeare wrote a shipwreck trilogy only after originally announced plans to include Pericles in the season got quietly shelved.) This particular shipwreck brings twins Viola and Sebastian to Illyria, here a dilapidated hotel in Greece in Jon Bausor's design. Each thinking the other drowned, Viola pretends to be a boy, and gets caught in the love games between the Duke Orsino (whom she has recently fallen for) and the disinterested object of Orsino's affection, Olivia, who now takes a shine to the "boy" Viola.

Farr's production has a lot of very interesting ideas: A swimming pool as part of the hotel set provides a dramatic entrance for both of the separated twins; a working onstage elevator is sparingly but cleverly used, notably in Malvolio's imprisonment; and as Feste is meant to be a fool who's past his sell-by date, I liked the idea of casting Kevin McMonagle as a dated working man's-club comic, complete with tinny synthesizer to accompany his songs. But in the first half especially (which takes us up to Act 3 Scene 2, slightly later than the interval usually comes) these didn't gel together for me into a very interesting show. It's a Twelfth Night I smiled at a lot, but laughed at rarely. I think a lot of this takes its cue from the crucial role of Viola: I've seen Violas I loved and Violas I hated but Emily Taafe's is a bit of a nonentity, who I frequently forgot was on stage altogether. 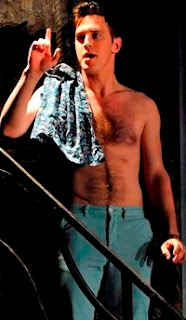 Orsino (Jonathan McGuinness) and Sebastian are notoriously bland characters at the best of times, but at least for the latter we have Big Favourite Round These Parts Stephen Hagan (the shirt is all he takes off but, to be fair, he's done more for the cause of onstage exhibitionism than most, you can't expect him to whip it out every time.) He gets paired with one of the best performances of the evening, the wonderful Kirsty Bushell finding a lovely line in understated comedy in her Olivia. Bushell also provides one of those great, rare moments where someone does something completely new (to me) with a familiar line, in this case her repetition of "What is your parentage?" to herself after first meeting Viola as "Cesario." (Bushell also throws in a little acknowledgement of the fact that the supposedly "identical" twins differ in height by about a foot.) Her increased presence after the interval may have been a factor in my warming to the production a lot more in its second half.

The play's major subplot, in which Olivia's household trick the puritanical steward Malvolio into thinking his mistress is in love with him also hits its stride better after the break. Jonathan Slinger's prissy Malvolio is reliably entertaining from the start, but really has to go above and beyond after the interval: Farr and Bausor have conceived the famous scene of his wearing yellow stockings and cross-gartered as a rubber bondage outfit; a rather unforgettable image that's unquestionably hilarious but also noticeably makes no sense whatsoever. What makes the scene is a seemingly unembarrasable Slinger's awkward physicality in the ridiculous costume. The production also makes a bit more sense of Maria's (Cecilia Noble) decision to involve herself in Sir Toby's scheme by having Malvolio hit her and perhaps also exhibit some racist feelings towards her.

Feste's songs, in compositions by Adel Ilhan, make the biggest contribution to the play's famous melancholy, but the tone does feel a bit inconsistent all in all. Andy had much the same reaction as me, feeling rather unmoved by the production by the interval but the show salvaged by the second half's increased pace and comic invention. Never quite stellar but full of ideas, this remained for me a production to move the head more than the heart or funny bone, but where by the halfway point this was the best Twelfth Night I've seen in three years by default only, by the end it had done a bit more to earn that title.