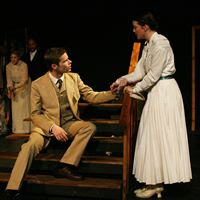 Running for a short season in Southwark Playhouse's second space, Summer and Smoke offers a familiar Tennessee Williams cocktail of madness, drug dependency and sexual repression in the stifling heat of the American South (a sign on the door warns there will be smoking onstage; but anyone who's been in The Vault even on the hottest day knows there's no way summer will ever make an appearance in there.) Alma (Kate Lamb) is the local minister's daughter, restrained and proper in a town that loves to gossip. The familiar Williams spectre of madness hangs over her in the shape of her mother, who since her nervous breakdown loves nothing more than spitting vitriol at her family (except maybe ice cream.) Despite this Alma seems to be getting on with her life until the newly-qualified Dr John Buchanan (Curran McKay) returns to town. They grew up next door to each other and old feelings now get reawakened.

Rebecca Frecknall's production avoids any period trappings beyond Lorna Killin's costume designs, going instead for a minimalistic approach, an ensemble of four (from whom Jenna Smith's precocious young Nellie stands out) playing all the supporting roles as well as providing a chorus of sorts, listening in and reacting - apt enough in a story where everyone seems to be waiting for Alma to slip up and give them something to about. Meanwhile the handsome, slightly sinister John doesn't care who talks about him and proceeds to drink, gamble and sleep his way around town. Lamb and McKay do well as the apparent opposites, each seemingly interested exclusively in either body or soul (and an interesting coincidence that two consecutive shows in the same venue should share an obsession with the idea of finding evidence of the soul in human anatomy.) Locked in a mutual obsession that, for hugely contrasting reasons, neither of them is willing or able to turn into an actual relationship, their pent-up emotions are a recipe for disaster. The ensemble format also makes for some interesting dramatic irony, such as when Alma starts to crack up and repeats some phrases to the brilliantly bitchy Mrs Bassett (Sarah-Jayne Butler) that Butler herself said to her earlier when she was playing the mad mum.

I'm rarely disappointed in Tennessee Williams and this was another one that sucked me into its melodramatic world; I found the final scene to be a bit overdone, Williams could perhaps have trusted the audience to get where the story was going without ramming it home quite so much, but other than that this is a less-performed work that is as effective as many of his better-known ones, and interestingly staged. (And I liked the little gag, in a venue where you can see the actors' breath as they complain about the heat, of having a mossy back wall wet from a leaky roof represent the town's water fountain.)

Summer and Smoke by Tennessee Williams is booking until the 30th of June at Southwark Playhouse's Vault.