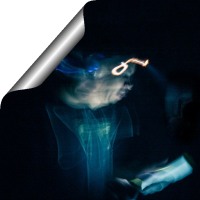 In the second of two Philip Ridley plays running in rep underneath Shoreditch Town Hall, Jamie Lloyd returns as director and Soutra Gilmour as designer, but the creatives who have the most obvious impact are sound designers Ben & Max Ringham and George Dennis. Killer is a collection of three monologues, each with a grisly theme as the title (and the fact that it's Ridley) suggests, performed by John MacMillan in the dingy basement rooms. It's a promenade piece that opens with the audience sitting in a circle, facing away from MacMillan in the middle; the lights go out and he narrates a young teenager's fascination with a new gang who - reminding me of the far-right party in Moonfleece - embrace a fascist style and a philosophy based around preparing for an inevitable apocalypse. When the narrator tries to join the gang they have a brutal way of initiating him. 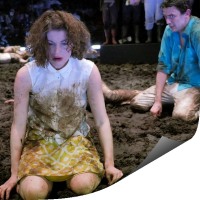 My first two Shakespeare productions of the year fell on consecutive nights, and while both are comedies they couldn't present more of a contrast, even before I got to their respective theatres: Where I'd been looking forward to Twelfth Night, last year saw A Midsummer Night's Dream even more overexposed than usual, so I was approaching it with some trepidation. Added to that was the publicity promising a particularly dark approach to the play, a cliché that can usually be taken as meaning "we failed to actually make it funny," and in any case the nightmare flipside of the Dream is frequently-explored territory. In the runup to a royal wedding Hermia (Jemima Rooper) and Lysander (John Dagleish,) whose love is forbidden, escape the threat of death by fleeing to the forest. They're pursued by Demetrius (Oliver Alvin-Wilson,) in love with Hermia, and Helena (Anna Madeley,) in love with Demetrius. 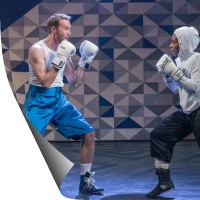 For most plays, having seen another production within four years would seem very recent, but the most popular Shakespeares come along a lot more often than that, and avoiding Twelfth Night for three full calendar years feels like an achievement - and one I was keen to make, because however fresh a director's twist on the story, there's only so much you can do to overcome familiarity. Realistically it would take a lot longer to forget a play I know this well, but under the circumstances this is pretty good going, and at least I break my run with a production I was looking forward to: The big selling point of Simon Godwin's production for the National is that Tamsin Greig plays a gender-flipped Malvolio. Now called Malvolia, she's housekeeper to the wealthy Olivia (Phoebe Fox,) the last in her family and as a result in a declared state of permanent mourning, any romance officially ruled out.

DISCLAIMER: Drama school productions are classed as amateur performances; but as ever, I try to treat them the same as I would professional ones as that's what the cast will be aiming to do next. 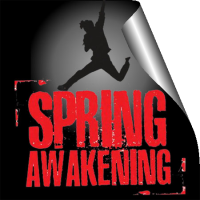 It's been a while since I went to one of LAMDA's public performances, and I've not seen them do a musical before, but Vanessa wouldn't have forgiven me if we'd missed a chance to see one of her absolute favourites, Spring Awakening. Steven Sater and Duncan Sheik's Broadway musical takes Frank Wedekind's famously banned 19th century play and plays it pretty well straight in the spoken-word scenes, adding deliberately anachronistic songs revealing what the kids are really thinking. Melchior (Ross Kugman tonight - two casts alternate between performances) is the first of his classmates to find out about sex, and only because he reads about it in a book. Apart from those Melchior informs himself, the others remain completely unaware as their parents refuse to discuss it. In the case of his girlfriend Wendla (India Shaw-Smith,) her mother's painfully coy description of the facts of life leads to tragedy. Other kids suffering include the resident loser Moritz (Soroosh Lavasani,) whose parents will disown him if he fails, which his teachers are determined he will. 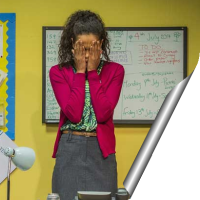 Alex MacKeith's debut play is a comedy-drama that punctures a situation pressured to the point of breaking: School Play is set in the office of a primary school headteacher and looks at a crisis in education - in particular the almost surreally wrongheaded system in which state schools need to show their students improving if they don't want to lose the very resources that make improvement possible. Lara (Fola Evans-Akingbola) has had to put her teacher training on hold ever since her father got ill, but is keeping her hand in by working as secretary to headteacher Jo (Ann Ogbomo.) Jo's received the students' SATs results and they're decent but not good enough to get the school any additional money next year - and she's just found out they'll be expected to take on an extra 100 pupils as well. 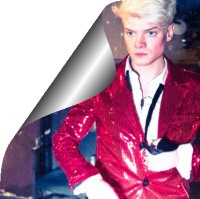 Last year Jamie Lloyd's ongoing West End projects kept getting bigger, and arguably lost the plot in the process - I made his Doctor Faustus my Stinker of 2016. Perhaps Lloyd himself feels the scale of things had got a bit out of his control because his first few projects of 2017 see him taking a step back towards something a bit more intimate - although not necessarily low-key, as he opens a mini-season of Philip Ridley plays at Shoreditch Town Hall with the playwright's 1991 debut, The Pitchfork Disney. Presley (George Blagden) and Haley Stray (Hayley Squires) are 28-year-old twins and the only survivors of the apocalypse - at least that's the story they tell themselves to justify their childlike lives cloistered in an East London flat. In fact ever since their parents died a decade ago - probably murdered, possibly by Presley - they've retreated into a co-dependent world of dark fairytales, drugged into sleep much of the time and hardly going out except to stock up on the chocolate that seems to be all they eat.

Opera review: The Depraved Appetite of Tarrare the Freak 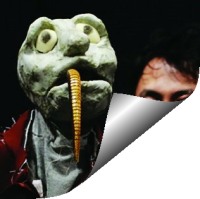 My admittedly rare trips to opera haven't exactly been a famous success, but I guess there's something inevitable about me finally "getting" and opera when it involves puppets and probable cannibalism. Wattle and Daub's The Depraved Appetite of Tarrare the Freak, with music and libretto by Tom and Tobi Poster, is inspired by a true story, and something of a medical mystery, from 18th century France. A young man known only as Tarrare had a constant hunger, and a bizarre digestive system that allowed him to swallow almost anything in an attempt to satisfy it. He smelled bad, never gained weight, and was a subject of fascination to surgeon Baron Percy, who tried everything he could think of to cure him but failed - the framing device is his autopsy, in which Percy is searching for a golden fork Tarrare said he swallowed and was the cause of his death - but which was never found. 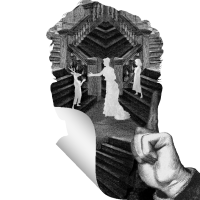 The Swanamaker launched with The Duchess of Malfi and now returns to the convoluted plots of John Webster for The White Devil - a play that's always failed to make much of a lasting impression on me, and although well-done I don't think Annie Ryan's production will change that too much. Joseph Timms plays Flamineo, who's so sick of not being rich he's willing to pimp out his married sister Vittoria (Kate Stanley-Brennan) to the wealthy Duke of Brachiano (Jamie Ballard.) But Brachiano becomes so enamoured of Vittoria he has her husband and his own wife murdered so they can be together. It backfires when Vittoria is accused of the murders and sent to a home for repentant prostitutes. While the family try to get their good name back, the dead Duchess' brother Francisco (Paul Bazely) plots revenge on Brachiano and all those who helped him.

Theatre review: Run The Beast Down 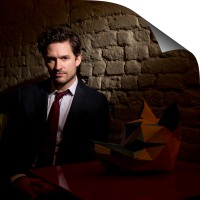 I suppose if you stage as many shows as the Finborough does, themes will start to emerge in the programming, whether intentionally or not - I'm guessing "the theatre that stages plays with menacingly symbolic foxes" isn't a tagline they'll be putting on the posters, but after Foxfinder and We Know Where You Live there's a sense of déjà vu when the animals turn up again in Run The Beast Down. Director-turned-writer Titas Halder offers up a long monologue for Charlie (Ben Aldridge,) an obnoxious city trader and hipster who, in the opening scene, loses his job and his girlfriend in quick succession. In seven chapters told out of chronological order, he tells us about how things started to fall apart both at work and in his relationship; and once he's stuck at home with nothing to do, his breakdown takes the form of an obsession with the foxes screaming outside at night. 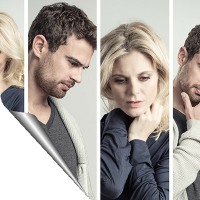 A writer writing about writing in Laura Eason’s Sex With Strangers, which opens at a remote Michigan cabin that's used as a writers' retreat. It's so remote, in fact, that a snowstorm has kept most of the participants away, and only two people have shown up: Olivia (Emilia Fox) wrote a well-received novel a few years back, but bad marketing saw it flop and she now works as a teacher, writing only as a hobby. Ethan (Theo James) is ten years younger but already much more successful - a blog he wrote about his one-night stands turned into two hit books, and he's now writing the movie adaptation, but he hopes once that's done he can branch out into more literary writing. A mutual friend introduced him to Olivia's novel and he became a fan, braving the weather to meet her and find out more about the woman behind the words. 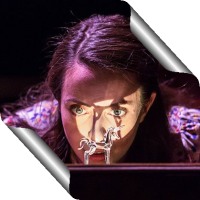 Tennessee Williams' most overtly autobiographical play is probably my favourite, which is just as well as it's also the one I've seen most often - John Tiffany's production of The Glass Menagerie is my fourth, and comes to London after acclaimed runs in New York and Edinburgh. Tom (Michael Esper) is the narrator, unreliable by his own admission, of a memory from his youth in St Louis living with his mother and sister, his father having long sonce absconded. His sister Laura (Kate O'Flynn) has a slight limp, and in her teens was ill with pleurisy for a long time, and both have been magnified in her mind - she became shy to the point that it's now a crippling mental illness. At the play's opening, their mother Amanda (Cherry Jones) discovers that Laura has been lying about going to a typing course for the last few weeks - she had a panic attack after a couple of days and dropped out. 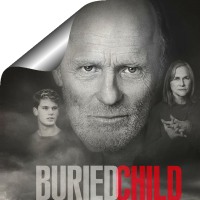