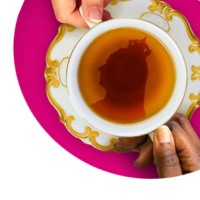 Bruce Norris' Clybourne Park is about to get a London revival but before then the Theatre Royal Stratford East jumps in with a new play that feels very much like a British response to that play: Both deal with racism in their respective countries by contrasting a story from the past with one in the present, and tackle a very real and serious matter through the surprisingly successful medium of a sharp comedy of embarrassment. And if there were any doubt that Janice Okoh's The Gift was a British play, the action centres on three excruciating tea parties. In the first two acts two black British women, both called Sarah, living over a century apart, are preparing for trips to Nigeria they don't really want to go on: Based on a real historical figure, Sarah Bonetta Davies (Shannon Hayes) was a Yoruba princess captured by enemies as a child, only to be rescued and given as a gift to Queen Victoria, who considered herself her adopted mother (although she largely packed her off to be raised by someone else.) 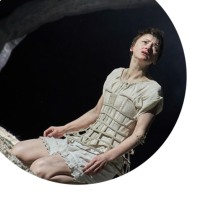 The last time Christopher Marlowe's version of the Doctor Faustus story was seen in London, the Swanamaker cast a female lead to take the journey through knowledge to damnation, but the text remained the same one written by and for a man. For Headlong's production, which opens its tour at the Lyric Hammersmith, a new playwright takes a crack at the old story, retelling it to ask what would make a woman sell her soul in Chris Bush's Faustus: That Damned Woman. Revenge turns out to be the answer, at least as the initial spur, when in 1666 London Johanna Faustus (Jodie McNee) is obsessed with finding out the truth about her mother, who was hanged as a witch. The charge was that she signed her name in Lucifer's book of souls, and Faustus is determined to find out if this was true, even if she has to summon the devil himself to ask him. Lucifer (Barnaby Power) agrees to let her read his book, but only if she signs her own name first and damns herself. 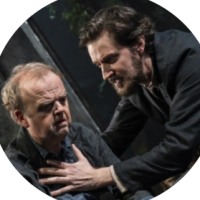 I can never quite decide which, of the plays so bleak even Chekhov didn't try to pass them off as comedies, is the most gut-wrenching: On the one hand Three Sisters spends its three hours relentlessly, unforgivingly tearing every last vestige of hope from its title characters; on the other there's Uncle Vanya, whose meditations on mediocrity and wasted lives get many a knowing, sad laugh of recognition out of its audiences. After a couple of high-profile outings for the former last year, it's the turn of the latter and Ian Rickson's production at the Pinter manages a lot more moments of dark comedy, while still packing a devastating punch. Vanya (Toby Jones) has spent his life managing the country estate that used to belong to his family, but was given away as his sister's dowry when she married a celebrated academic. The sister has long since died, and Vanya and Nana (Anna Calder-Marshall) have pretty much raised her daughter Sonya (Aimee Lou Wood) themselves. 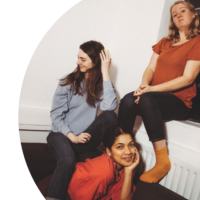 With #MeToo, #TimesUp and other related hashtags popular themes in new plays over the last few years, there's no question theatre has engaged with the fact that women's position in society is long overdue a shake-up. But Miriam Battye's Scenes with Girls deals with the tricky question of just how easy it'll be to figure out what that new position is. For two best friends since high school, and now flatmates, it's all about taking the language and ideas of feminist forums and applying them directly to their own lives, but they've got very different interpretations of this: Lou (Rebekah Murrell) isn't interested in a relationship with a man but wants to have sex with a lot of them without feeling slut-shamed about it; she treats it like a man stereotypically would, proudly tallying up the number of her sexual conquests. (She has considered a relationship with a woman in theory, but is worried she'd be so prone to letting her have her way out of feminist solidarity that she'd become a doormat.) 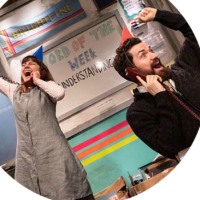 Andy Rush and Andrew Finnigan in a play together at last, and it's not written by Tom Wells? It must be the End of Days. In Sam Steiner's strangely positive tragicomedy You Stupid Darkness! it actually is the End of Days, but rather than a single explosive event this is a slow-burning Apocalypse that's very gradually but inexorably rolling out across the world. The unnamed event has left the air toxic; next to parts of the city that are still liveable are no-go areas, the (presumably quarantined) residents horribly infected. Whole towns get suddenly wiped out and one day all the trees fell down, but it's not all over quite yet, and until it is everyone might as well just get on with their lives. So 17-year-old Joey (Finnigan) still has to get his work experience credit for school, and every Tuesday night goes to Brightline, a late-night helpline where he and three other volunteers take calls from people struggling to cope with Everything That’s Happening. 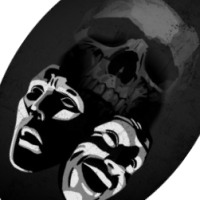 Almost as numerous as productions of Hamlet itself are reinterpretations and reimaginings of Shakespeare's play, and in 6FootStories' Hamlet: Rotten States, the play's the thing - being created on the fly. Will Bridges, Amy Fleming and Jake Hassam are the company of travelling players Hamlet enlists to perform "The Mouse-Trap," the performance that's meant to elicit a guilty response from Claudius, his uncle and the new King of Denmark. But in this version of the story, the script Hamlet has given the actors to perform is unusable gibberish. The ghost of Hamlet's father has to appear to the actors themselves to give them the backstory: How Claudius murdered him then stole his wife and crown. With it now left up to them to bring the secret to light the players decide to rewrite the play from scratch, and the play they end up writing isn't an unsubtle metaphor, but Hamlet itself.

“They set in in the 17th century, gave him a long nose, maybe made it a bit funnier... but for the British, Bergerac will always be John Nettles.” 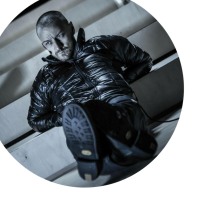 Jamie Lloyd is a director known for being able to get big names on stage, rather than one who has an unofficial company of actors he keeps working with; but one regular collaborator is James McAvoy, who takes the lead as Lloyd launches his latest West End residency, this time a selection of eyewateringly-priced international classics at the Playhouse. And if there's any doubt that this opening salvo is going for a stripped-back style, the one thing that everyone automatically associates with Edmond Rostand's Cyrano de Bergerac doesn't make an appearance on McAvoy's face. In 1640 Paris, soldier Cyrano is notorious for three things: One is his proficiency with a sword, which sees him able to take out multiple assailants on his own, and also means he can take brutal revenge on anyone who seems to be making fun of his second notable feature, his unusually large nose. But it’s the third thing that becomes central to the play’s plot, and therefore the only one that Lloyd actually stages in a literal way. 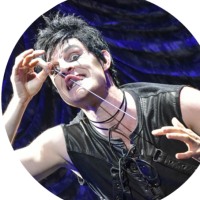 Taking up half of Mischief Theatre's year-long residency at the Vaudeville Theatre is a return, after an attempt at a slightly more conventionally-structured play in Groan Ups, to the "Goes Wrong" format of their original hits and their current BBC1 show, and a "does what it says on the tin" approach of fitting as many comic disasters as they can into the running time. The usual writing team of Jonathan Sayer, Henry Lewis and Henry Shields are this time joined by Penn & Teller to create their most spectacular show yet - and one where the accidents get grislier than ever before, as Magic Goes Wrong. The format seems to be inspired by the Vegas-style magic shows that have recently been making a return to the West End, whose posters promise a whole team of magicians with superhero-style names. And so Shields' Sophisticato has organised this evening as a charity gala for the victims of disasters in magic, in memory of his father, the original Sophisticato (crushed to death by his own props.)

A dick joke about Richard III? Who would do such a thing? 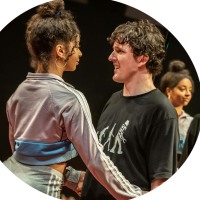 Michael Longhurst's second directing gig at the Donald and Margot Warehouse since taking over as Artistic Director is Mike Lew's take on the once-ubiquitous teen movie sub-genre of Shakespeare plays (or other classics) relocated to American High Schools. Richard III becomes Teenage Dick and the role of Senior Class President is the crown a physically disabled anti-hero will do anything to get. In a story that for much of its running time is savagely funny, Richard Gloucester (Daniel Monks) has been bullied and marginalised throughout his school years because of his hemiplegia (apparently Lew makes it a condition of staging the play that this role and that of his sidekick Buck be played by disabled actors, with the script adapted to match their real disabilities.) Quarterback and Junior Class President Eddie (Callum Adams) has been his chief tormentor, and Richard hatches a plot to steal the upcoming election out from under him.

Theatre review: The Duchess of Malfi 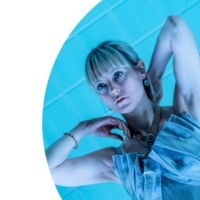 Rebecca Frecknall has inherited Robert Icke's Associate Director position at the Almeida and with it, it would seem, the van Hove-style captions and a set dominated by a glass-panelled room. Why this one, designed by Chloe Lamford, appears to be a gym changing room I'm not sure, but if the visuals are a bit more elaborate than in her last couple of shows here, Frecknall's style continues to pare scenes down to a breathtaking minimum. The Duchess of Malfi is John Webster's tale of a woman afflicted with two sexy-but-evil brothers, and Lydia Wilson gives a steely performance as the Duchess who's widowed very young, and claims she has no intention of marrying again. It's a lie she tells because she's in love with her steward Antonio (Khalid Abdalla,) and the gulf between their stations means her older brother the Cardinal (Michael Marcus) would rather see her dead than marrying beneath her and disgracing the family. 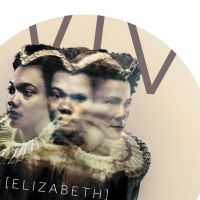 I'm starting to think of the 2019/2020 Swanamaker season as "the chipboard season," given the material that's covered the stage for Henry VI, Richard III, and now the winter season's only premiere, Ella Hickson's Swive [Elizabeth]. It's revealed in a flourish that makes a very early bid for coup de théâtre of the year, as Hickson and director Natalie Abrahami remind us that for all its atmosphere and quaintness this theatre is actually barely six years old, and a biographical play about Elizabeth I (Abigail Cruttenden) might turn out to be surprisingly devoid of courtly niceties. In fact it's an 85-minute race through Elizabeth's life from toddler to menopause, and how her treatment by men throughout her life might have led her to dig her heels in against all the pressure to marry and produce an heir, and instead make the rule of England's only unmarried Queen one of the most iconic eras in history.