PREVIEW DISCLAIMER: Groan Ups is having an extended preview period and invites the official reviewers in next week. 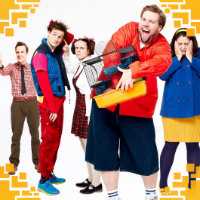 Mischief Theatre's success story has gone beyond fairytale to downright ridiculous as they're now a worldwide brand, who recently took out an ad promoting their current and upcoming London shows, and needed an entire Evening Standard wraparound to fit them all in. Having been a fan of their work since The Play That Goes Wrong was a one-acter testing the waters at Trafalgar Studio 2 I've been dreading them losing their magic touch and falling flat on their faces (in the bad way.) A year-long residency for the core company at the Vaudeville could have been the over-ambitious move that proved too much, but the opening show certainly suggests they're nowhere near running out of steam yet. As usual Henry Lewis, Jonathan Sayer and Henry Shields are the writers, but Groan Ups gets its laughs from a more traditional farce structure than their earlier hits, as well as suggesting they do have a more thoughtful side when they want to.

Things still go wrong, but the stakes are higher and more rooted in the real lives of the five characters we follow, over three scenes, from primary school to their early thirties. Fly Davis' massive classroom set shrinks the cast down to tiny children for the opening, where they're left unsupervised when their teacher needs to cut out the glue Spencer (Lewis) has spat into her hair. In chaotic scenes we get to know the kids and their relationships, from Sayer's Simon, the class butt-monkey fixated on spoilt rich girl Moon (understudy Krystal Dockery,) to Shields' Archie, whose desire to give his friend Spencer a kiss and cuddle isn't something that'll go away when he gets older. But when we next see them aged 13, Archie is dating Moon, while jealously looking over at the class swot Katie (Charlie Russell,) who's just started seeing Spencer. There's awkward teenage fumbling and a secret betrayal that won't come out until they meet again at a school reunion in their thirties.

Groan Ups is an attempt to write a more fully-formed play with more fleshed out characters, and it's something I can imagine being revived in the future, and not necessarily as part of the Mischief brand. Kirsty Patrick Ward's production holds together well and convinces that the performers best-known for physical comedy (Mischief regulars Dave Hearn and Bryony Corrigan also appear in smaller roles) can also give it a bit of real heart as well. The only major criticism I have is that the story's structure is an over-familiar one, with the characters being pretty standard archetypes and the gay storyline in particular being one that's been seen very often before.

But this is a comedy troupe and the structure is mainly there to hang jokes on, and the outrageously funny moments keep coming. Each setup has its own opportunities for jokes, from the prologue of a painfully inappropriate primary school assembly, to the cast milking the opportunity to play schoolkids (in what's now essentially a running gag across all of the company's work, everyone does squeaky little kid voices except for Lewis whose usual booming voice is present and correct,) to the awkwardness of teenagers just discovering their sexuality (and accidentally punching people in the balls in an attempt to be sexy) and finally the adults who really haven't changed anywhere near as much as they'd like since they were kids. Also an alarming amount of hamsters get killed along the way. Lewis, Sayer and Shields probably won't go down as the most original or revolutionary playwrights of the 21st century, but they can still pack more screamingly funny gags into a show - more of them verbal than visual this time around - than almost anyone I've seen.

Groan Ups by Henry Lewis, Jonathan Sayer and Henry Shields is booking until the 1st of December at the Vaudeville Theatre.