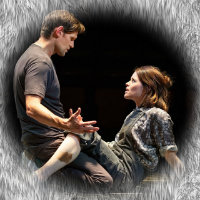 Duncan Macmillan’s Lungs was first seen in London in 2012, and though even then it was obvious that its environmental politics was heartfelt, there was an inevitable touch of the First World Problems to its middle-class couple worrying about whether they were destroying the world by buying imported avocados. So 2019, right in the wake of London’s Extinction Rebellion protests, is a canny time to revive the play as its unnamed couple’s concerns have become much more universally relatable – the play is still funny, but the fear of contributing to the planet’s extinction is no longer a punchline. Except for the bit about the avocados, for some reason the very mention of them will forever be automatically funny to the sort of people whose laugh sounds like “fwaw fwaw fwaw fwaw.” Still, topical or not, a two-hander about a couple facing an environmental and personal crisis might have been a hard sell to fill the Old Vic with if director Matthew Warchus didn’t have another trick up his sleeve.

Warchus’ revival reunites popular screen couple Matt Smith and Claire Foy (“for the first time since The Crown!” and honestly calm down, their last season only aired two years ago.) It’s been a commercially good decision but also artistically, as there’s no question they bring a lot of chemistry with them. 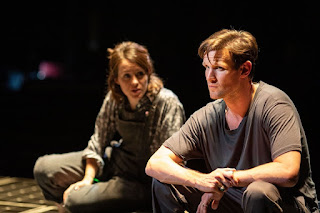 The couple have been together for a while and are now living together, and it’s in the queue at IKEA shopping for lamps that Smith’s Man blindsides Foy’s Woman by bringing up the subject of their having a child. In a sequence of witty, choppy scenes we jump through the next few months and years as they debate whether they should have the child and eventually start trying for a baby; and the ways in which their relationship is affected and tested both by the arguments and by unforeseen setbacks along the way. Lungs is one of those clever plays whose two topics simultaneously act as a metaphor for each other: Woman’s biggest argument against having a baby is that it’s irresponsible to impose that kind of carbon footprint on an already overstretched world, and, as a bleak epilogue confirms, the play’s ultimate concern is with the environmental crisis and what kind of world the child would inherit. 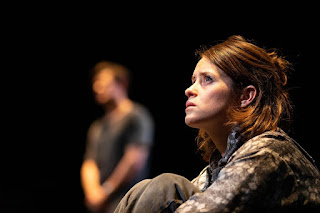 But at the same time it also works as an effective relationship comedy-drama, the wider damage done by billions of new people being born is reflected in microcosm in the ways the baby – even the thought of it – alters the pair’s relationship in unexpected ways. This is a play designed to be intimate, performance-driven theatre, so it was surely a risky prospect for somewhere as vast as the Old Vic. Warchus helps overcome this partly by using the venue’s in-the-round configuration, with Rob Howell’s set a simple stage of solar panels, with just a couple of raised areas for the cast to sit on. 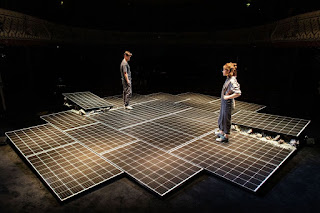 If it manages to maintain some of its necessary intimacy it’s largely because Foy and Smith have a good ear for Macmillan’s witty, breathless dialogue – Foy in particular gets a number of increasingly panicked speeches delivered at great speed, and once the audience gets over the novelty of the Queen saying “fuck” has the chance to really build up this new character, neurotic, bossy and domineering but ultimately sympathetic – her charm helps sell how she and Smith’s more laid-back character work as a couple. Although it touches on arguably the heaviest subject you could choose to tackle, Lungs is overwhelmingly an entertaining and funny show that gradually also makes you care about the fate of its central couple (and hopefully also that of the planet they live on.)

Lungs by Duncan Macmillan is booking until the 9th of November at the Old Vic.