Theatre review: The Ruffian on the Stair 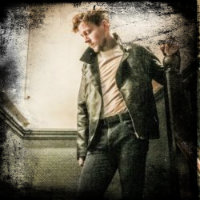 The similarities between Joe Orton and Harold Pinter's work don’t always jump out at you, but timing is everything and the Hope Theatre’s production of The Ruffian on the Stair comes near the end of Jamie Lloyd’s Pinter at the Pinter season, specifically after The Room. Written as a radio play (and later revised for the stage) in 1963, it’s hard not to see The Ruffian on the Stair as a response to Pinter’s debut from a few years earlier. Both short plays are set in a poky apartment in a larger building, in which the lady of the house is terrorised by unwelcome visitor(s) when her husband is out, driving a van for what is probably some nefarious purpose (although in Orton’s case, the purpose is eventually made very clear.) Joyce (Lucy Benjamin) is a former (and possibly current) prostitute now living with Mike (Gary Webster,) whom she calls her husband - although whether or not they’re actually married seems up for debate. 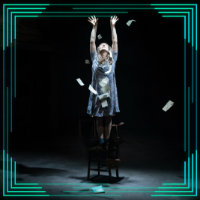 It’s been an unusually musicals-heavy January, and with Jeanine Tesori’s Caroline, or Change currently transferred to the Playhouse, a few feet away her 1997 show (with book and lyrics by Brian Crawley) gets its UK debut at the Charing Cross Theatre. Another link to the composer’s more recent work is Fun Home’s leading lady Kaisa Hammarlund, looking significantly less like Sue Perkins as she takes the title role in Violet. Set in the Southern US states in 1964, Violet is a woman who was hit in the face with an axe by her father when she was 13 (probably by accident, although she doesn’t seem entirely convinced.) The resulting scar makes people recoil at the sight of her, and as the play opens she’s leaving her small North Carolina town and getting on a Greyhound bus to Tulsa, Oklahoma, to see a televangelist and faith healer she hopes can restore her looks. 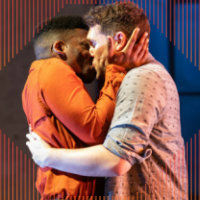 It's mercifully not about Brexit, but the title of Matt Jones and Kele Okereke's new musical Leave to Remain is still enough to bring me out in hives. Instead it's "leave" as in "permission," as the story begins when London-based American Alex's (Billy Cullum) firm decide to relocate their business entirely out of the UK to Abu Dhabi (...so I guess it is about Brexit?) His visa is entirely dependent on his job, so if he resigns he'll no longer be entitled to stay in the country. He's built his life here and the fastest obvious way to stay is to marry his boyfriend Obi (Tyrone Huntley.) But their relationship is very new so it's an extreme step, and despite quickly agreeing to it Obi is emotionally very distant so it's hard to be sure how he really feels about his partner. Besides, formalising his relationship will mean Obi confronting his family and the way they reacted when they found out he was gay. 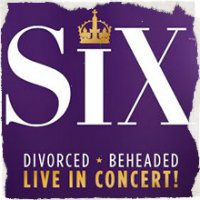 The historical musical continues to be a phenomenon in the wake of Hamilton, and the good news is that however much reviewers (including me) like to compare the latest ones to the Broadway juggernaut, none of the British entries have really used Lin-Manuel Miranda as a template, each instead taking its own eccentric path. SIX is the first of the current crop to be sent back across the Atlantic – a Chicago production in the spring will be hoping to carry on to New York – and it’s hard to think of a piece of English history that’d be an easier sell to American audiences than the six wives of Henry VIII. Toby Marlow and Lucy Moss’ musical played a short run at the Arts Theatre in the autumn, when I was too busy to catch it, but it’s now returned there after a national tour, and is already booking a year in advance. And it’s not hard to see why, as the publicity campaign must be getting help from enough enthusiastic word of mouth to fill the small theatre for a while. 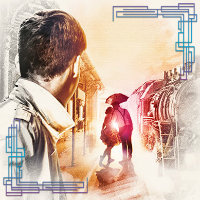 Although I’m not much of a fan of Dr Baron Dame Sir Andrew Lloyd Lord Webber BA (Hons) MEng, QC, MD, P.I., shows come along sometimes like the Open Air Theatre’s Jesus Christ Superstar that mean I haven’t written the millionaire supervillain off completely; and I vaguely remember enjoying the Menier Chocolate Factory’s production of Aspects of Love nine years ago. But I think on that occasion I must have just enjoyed looking at Michael Arden for three hours because revisiting it now at Southwark Playhouse it turns out the show is a right turd. This is the latest of Jonathan O’Boyle’s musical revivals to transfer from Manchester’s Hope Mill Theatre, and in fairness I don’t have much issue with the production itself or the cast. Set mainly in France between 1947 and 1964, it begins with 17-year-old Alex (Felix Mosse) getting an Ibsen boner for actress Rose (Kelly Price) and inviting her to spend a fortnight with him at his wealthy uncle’s country house. 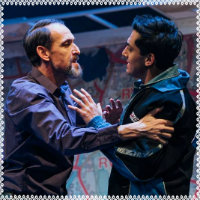 Ishy Din’s Approaching Empty takes place in 2013, specifically between the announcement of Margaret Thatcher’s death and her state funeral. It’s an on-the-nose framing for the story of two lifelong friends whose lives were largely defined by the dead sociopath’s policies: Mansha and Raf moved from Pakistan to Middlesbrough in the 1970s to work in a steelworks specialising in bridge-building, but in the ’80s Thatcher’s policies saw the factories close and the onus put on the workers to make their own way. Raf (Nicholas Khan) largely views this as a success, as he used his redundancy package to start a minicab business; it’s managed day-to-day by Mansha (Kammy Darweish,) who used his own redundancy to pay off his mortgage, but then spent the next thirty years stuck in a rut professionally. So when out of nowhere Raf expresses an interest in selling the business to a larger cab firm, Mansha finally sees an opportunity to be his own boss. 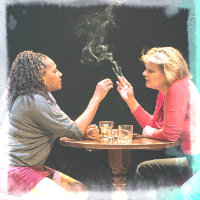 On past experience, a play having won the Pulitzer isn’t much of a guarantee that I’m going to like it, if anything the opposite; identifying a hot-button topic to write about often seems to be enough to win regardless of execution. Lynn Nottage is the first woman to have won the theatre prize twice, and the Donald and Margot Warehouse gets the UK premiere of the latest, Sweat. Nottage certainly identified her hot-button topic early: She started research in 2011, for a play which in part feels like an explanation for why parts of America were so vulnerable to the rise of Trump. The good news is that, in Lynette Linton’s production, the execution lives up to the idea. Nottage was inspired by the statistic that Reading, Pennsylvania, a relatively comfortable industrial city in the 20th century, was now the poorest place in America. The shift came when the textile mill that was the area’s primary employer significantly downsized and outsourced its work, leaving people who’d always felt comfortable in their job security suddenly unemployed. 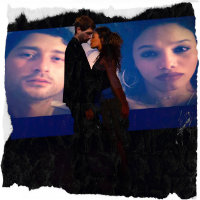 It’s got to be something of a coup for a 50-seat theatre to land a recent Olivier winner – in a supporting role no less – but there’s a couple of reasons Sheila Atim might be happy to lend a bit of star power to the fringe: Not only has she worked with writer/director Chè Walker before, she’s also composed the original music for his latest play, Time Is Love/Tiempo es Amor. Walker’s Been So Long, recently reinvented as a Netflix film, had a strong flavour of London but the playwright subsequently moved to Los Angeles, and that’s the location, and the atmosphere he tries to capture here. This is partly through a film noir-ish feel to the story of Blaz (Gabriel Akuwudike,) who spends three years in prison after a robbery goes wrong. His friend Karl (Benjamin Cawley) was the one who talked him into it, but managed to get away; but apart from missing his friend he doesn’t seem to have much regret for what he got him into, if anything acting like he’s the wronged party.

Theatre review: The Tragedy of King Richard
The Second
(Almeida) 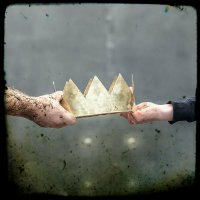 Simon Russell Beale first made his name as a Shakespearean actor taking on roles that didn't always seem immediately obvious fits for him (I first saw him as Edgar in King Lear, then Ariel in The Tempest.) By contrast Richard II seems like a part he was born to play, but in recent years he's often said he regretted never getting the chance while he was young enough (the real king died aged 33, inasmuch as historical accuracy ever matters where Shakespeare's Histories are concerned.) If someone was going to come along and give him the chance to play the part in his fifties, it makes sense for it to be Joe Hill-Gibbins, never a director to get too hung up on the literal. Hill-Gibbins has restored the full original title The Tragedy of King Richard The Second but elsewhere he and Jeff James have ruthlessly cut down the text so the play comes in at a little over 90 minutes. 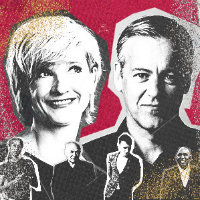 If something happens in London theatre and Patrick Marber isn’t involved, did it really happen? Well Pinter at the Pinter has definitely happened now, as for only the second time Jamie Lloyd has relinquished directing duties for an entire anthology to someone else, and Marber takes over the triple bill that comprises Pinter Five. This one goes right back to the beginning and Pinter’s first produced work, as 1957’s The Room slightly predates The Birthday Party, and sees the playwright make no bones about the fact that his style is going to be eerie and ambiguous. Soutra Gilmour’s revolve stays still this time as a single, large but comparatively cosy room, but the rest of the boarding house it’s in is as much a character in the short play as anything else: Rose Hudd (Jane Horrocks) knows she has neighbours but doesn’t seem to know them; she’s fascinated with who might live in the dark, damp basement, and thinks people also live in the floors above them, but nobody seems to know how many floors the building actually has.