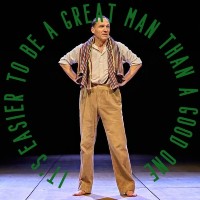 Playwright David Hare, actor Ralph Fiennes and director Nicholas Hytner reunite at the Bridge Theatre where they last collaborated on Beat the Devil; that one was a monologue, and while Straight Line Crazy surrounds Fiennes with a large cast, it can sometimes feel just as much of a one-man show. Certainly the true story it tells, of a man whose influence changed the face of America's cities in the twentieth century, seems a fascinating one: Robert Moses (Fiennes) was an urban planner, although he hated the term because it implied a lot of theory, not action, and he was determined to get things done regardless of whether the people they impacted wanted them or not. In the first act we meet him in the 1920s, pushing through his plans for Long Island: A playground for the rich, he intends to open up its parks and beaches to the public of New York by building roads, giving them a break in the leisure time the workers are now starting to see as a right.
Read more »
Posted by nick730 at 23:22 No comments: 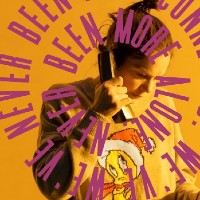 I've loved a lot of Ivo van Hove's work but I'm far from finding him faultless - some of his screen-to-stage adaptations have been positively soporific, and the David Bowie musical is just a baffled question mark in my memory - so while I hope for the best, I don't assume every one of his shows will knock it out of the park. And while his reunion with Ruth Wilson for a Jean Cocteau monologue had a lot of anticipation behind it, sadly it goes very much into the other column of the director's work. In The Human Voice, Wilson plays a woman on the phone to her ex-boyfriend soon after their breakup; he's moved out of her apartment, but she still has a few of his things (including his dog) to send to him. He's also promised her one last conversation - although she found out he was having an affair and anticipated that he would leave her a few weeks before it happened, she's still not adjusted at all to the idea of being without him.
Read more »
Posted by nick730 at 22:11 No comments: 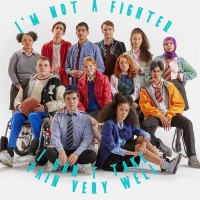 While we don't currently have the mass cancellations we were seeing at the height of Omicron, some shows are still being more affected by Covid than others: The performance of Our Generation I'd originally booked for last month got cancelled - by this point it had become apparent it was nearly four hours long, so to be honest I didn't mind the opportunity to reschedule from a Tuesday night to a weekend - and tonight's almost went the same way, as two cast members had had positive test results and the Dorfman doesn't carry understudies. Fortunately two of their castmates were able to read in all their roles as well as playing their own, so Sarita Gabony covered Anna Burnett's part and Stephanie Street read in Debbie Chazen's tonight. And I'm glad they did, as despite its epic length it would have been a shame to miss Alecky Blythe's epic of five years in the lives of teenagers, her most significant and affecting work since London Road.
Read more »
Posted by nick730 at 23:54 No comments: 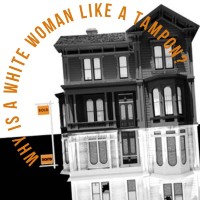 I'm yet to see Lorraine Hansberry's A Raisin In The Sun, famous as a classic work on race in America, not to mention one of the first big successes by a black female playwright, but I am now seeing a second London production of a more recent hit directly inspired by, and set in the same neighbourhood as, Hansberry's play. I think if Bruce Norris' Clybourne Park had been written now there would be more questions asked about whether this was a male white playwright's story to tell (and there's always been a certain amount of controversy around the subject,) but when it premiered in 2010 it was a big success, even becoming that rarity: A Pulitzer winner I don't hate. And Oliver Kaderbhai's revival demonstrates why, as the bold choice to tackle America's most contentious subject with broad comedy is backed up by Norris' pitch-perfect comic escalation.
Read more »
Posted by nick730 at 23:22 No comments: 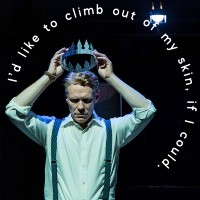 I can see why prolific German playwright Franz Xaver Kroetz' 1978 play Tom Fool might seem ripe for revival: Its attack on capitalism dehumanising workers is particularly focused on the way it defines the roles and priorities of men and women, a relevant subject when clichés about masculinity are being interrogated. Whether that's enough to make an incredibly dry and dusty play feel worth another look in 2022 is a different story altogether. Otto (Michael Shaeffer) works on the assembly line at a BMW plant. He makes enough money to support his family and afford a few luxuries, but not so much that he doesn't need to keep an eye on the cost of everything, or treat his valuables with care: When the boss borrows his Parker pen and forgets to give it back, it's a matter for sleepless nights and worried rants to his wife for weeks.
Read more »
Posted by nick730 at 18:24 2 comments:

You're subconsciously trying to prove something, and we won't blame you for that, but you have to understand it has consequences for the people involved. Parklife! 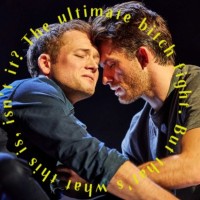 This spring is going to be busy with new Mike Bartlett work, but before that a high-profile revival: It's been over a decade since he first showed London his Cock, but now it returns, and with it return limited runs with big-name casting. The original production starred Ben Whishaw and Andrew Scott, but that was very much when they were mainly known to theatre audiences, before Peruvian bears, horny priests and Bond films brought them to a wider audience. For the play's West End debut at the Ambassadors, Marianne Elliott has got the male leads very much at the height of their popularity (with prices to match, although it turns out the more reasonably priced back of the Circle has decent sightlines, and legroom that's... not great, but not technically a human rights violation.) The attention-grabbing title has various possible meanings, but at the heart is a man whose relationships deteriorate into something resembling a cockfight.
Read more »
Posted by nick730 at 23:25 No comments: 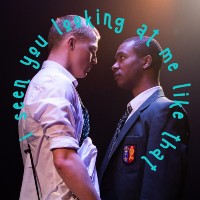 Teenage codependency at the Finborough where Sophie Swithinbank's Bacon sees two 15-year-old outsiders find a kind of escape with each other - before discovering they're as bad for each other as anything they're escaping. Middle-class Mark (Corey Montague-Sholay) has moved to a Catholic boys' school after his parents' divorce, and quickly finds he won't break into any of the established friendship cliques in any hurry, especially as a rather quiet, fussy and studious boy. Darren (William Robinson) has the swagger and intimidating talk of a bully, but fewer social skills than even that would suggest: He's suspended from school so often, he has as little a friendship circle there as Mark. They clash on Mark's first day, but then at every one of his attempts to socialise Darren seems to be around. When Darren frames Mark so they end up in detention together, one of the boys at least starts to admit to himself that this is becoming a weird kind of friendship, and that he's excited about it.
Read more »
Posted by nick730 at 17:58 No comments: 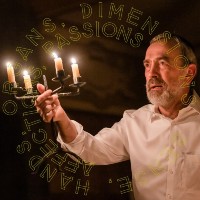 Measure for Measure, Hamlet and The Merchant of Venice doesn't sound like the most exciting season imaginable on paper, but the Swanamaker has been firing on all cylinders this winter, and in what could have been the least promising offering of all it turns out they've saved the best till last: Abigail Graham's is probably the best Merchant I've ever seen, and not just because she's cut the entirety of Act 5. In fact, as we've come to expect from the Globe, it's not a production that's precious with the text, cutting and reshuffling to serve its purpose. In this instance, it's to set the action in the high-risk, masculine, bullying culture of modern-day city traders, so we open with Aaron Vodovoz' geeky Launcelot Gobbo asking for a job with Bassanio (Michael Marcus.) He's made to play a drinking game as part of his application, which mainly involves a penalty every time he says the word "Jew" - and as he's talking about wanting to leave his current employer, the Jewish moneylender Shylock, he says it a lot. He ends up very drunk and humiliated, but gets the job.
Read more »
Posted by nick730 at 23:12 1 comment: 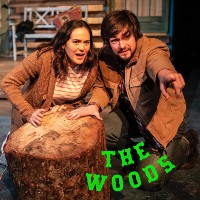 It might be long past time to add David Mamet to the pile of theatre creatives life's honestly way too short to be doing with: The Woods may be one of those rare shows that comes in slightly under the advertised running time, but it feels about twice as long. Dating from 1977, it's one of the battle-of-the-sexes plays Mamet really should have realised aren't his forte by now, and sees young couple Nick (Sam Frenchum) and Ruth (Francesca Carpanini) take a break at the remote cabin Nick inherited from his family. City girl Ruth is charmed and endlessly fascinated by the rural setting but Nick, who spent a lot of time at the cabin as a child, seems to associate the place with bad memories and be frightened of almost everything about the surrounding woods and lakes, to the point that you have to wonder why he ever agreed to return there in the first place. What he's probably really afraid of is being with his girlfriend in a place with no distractions, and having to confront what his actual feelings are.
Read more »
Posted by nick730 at 21:43 No comments:

Theatre review: After the End 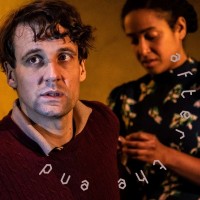 It's a truism by now that any show staged seems to end up with a (usually bleakly) ironic relevance to current events, more often than not a different one than was actually intended. When Theatre Royal Stratford East scheduled a revival of a play about two people trapped together in a nuclear fallout shelter, they probably imagined it would raise the odd wry smile of recognition from people who've spent the last two years in and out of various levels of lockdown; instead it's more likely to remind a London audience that the Express is currently running articles about whether the compete annihilation of the capital by nuclear bomb would negatively impact on house prices in Surrey. Dennis Kelly actually wrote After the End in response to 9/11, which is why the nuclear weapon that goes off just before the story starts is a terrorist attack by a suicide bomber rather than an act of aggression by a foreign power.
Read more »
Posted by nick730 at 18:03 3 comments: 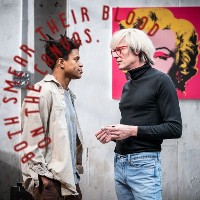 Andy Warhol made a couple of cameo appearances in the Young Vic's last production, Best of Enemies; for Anthony McCarten's The Collaboration he takes centre stage. But where the 1960s Warhol we saw last year was at the height of both his creativity and his celebrity, the 1984 Warhol (Paul Bettany) we meet now is all too aware that - while still a big name - his work has become predictable, his prices are falling, and the likes of Jean-Michel Basquiat (Jeremy Pope) are the names on everyone's lips now: Warhol still hangs out with Yoko Ono, but Basquiat gets photographed with (and may or may not be sleeping with) Madonna. The two wildly different artists do share an agent, Bruno (Alec Newman,) and he sees the idea of an unlikely collaboration between the two as a way both of propelling his up-and-coming client even further, and of revitalising the established one's flagging creativity.
Read more »
Posted by nick730 at 22:35 No comments: