PREVIEW DISCLAIMER: I can't easily tell from the Globe website when the press night is due, but as I had a member of the creative team sitting next to me making notes I'm guessing we're still in the preview period for this one. 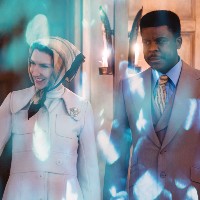 I'm going to get a big grumble out of the way first this time, because I have a lot of good things to say about Blanche McIntyre's production of Measure for Measure, and don't want them to be overshadowed by something that's a regular irritation. But you know, if it's a regular irritation at one particular theatre that's because they just keep doing it, namely underselling how long a show is. I know I often say I like short shows, so can understand why saying a show isn't that long is good marketing, but if it's not true the advertised running time is useless at best, a lie at worst. I use the info to figure out when and how is the best way to get home, especially when, like tonight, a Tube strike makes that more complicated. So as seems to happen every time I go to the Globe now, I spent the last half-hour wondering if the play would overrun by 15 minutes (can still catch my train) or 20 (1 hour 15 minute gap until the next one for some reason, not getting home until after midnight) instead of paying attention to the show*.
And it's a shame, because everything else about the production was well worth paying attention to. Measure for Measure is one of the original three Shakespeare works termed Problem Plays (before everyone started to pay attention and realised that was actually most of them,) and with issues beyond just the difficulty in classifying it, it's rarely been one of my favourites. But McIntyre has a strong approach to it, and she shows this right from the off. 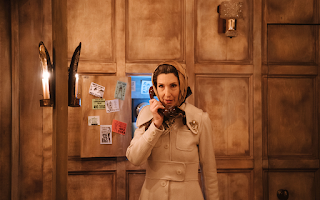 The Swanamaker's been around for eight years now, and while it still raises gasps from newcomers, those of us who've been watching candlelit plays for nearly a decade are used to it, so it's lovely to see a fresh take on the venue's USP: McIntyre's production has a 1970s, Winter of Discontent feel, and as the Duke (Hattie Ladbury) takes to the brightly, electrically-lit stage to make an announcement, there's a power cut that leads to the rest of the evening being played with candles. It's a witty start to an evening that hits the comedy notes in a play where that's not always easy, and the inventiveness with the space extends to the design: Since Michelle Terry took over the Globe, designers seem to have been encouraged to treat the Swanamaker less like a "jewel box" and more like any other theatre, and James Cotterill's set includes a diagonal metal staircase from the stage to the musicians' balcony. It's used sparingly but changes both the look and dynamic of the space. 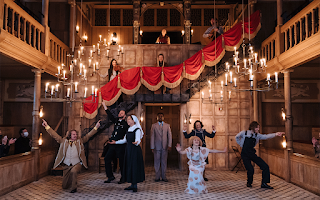 The Duke is leaving Vienna for an unspecified time; in reality, she thinks she's been too lax in upholding the city's strict morality laws, and thinks deputising the uptight Angelo (Ashley Zhangazha) will solve that. She disguises herself as a priest and stays to watch as, indeed, Angelo immediately implements the laws in full, closing all the brothels and leaving all the sex workers destitute, and condemning Claudio (Josh Zaré†) to death for getting his fiancée pregnant before marriage. But the temporary ruler is soon revealed as a hypocrite when Claudio's sister Isabella comes to beg for his life, and Angelo says he'll grant the pardon in exchange for her virginity. 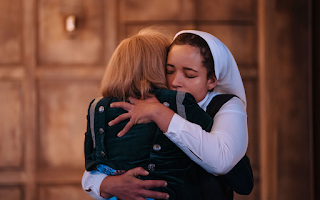 On top of the moral issues any production has to navigate, I find Measure for Measure is also problematic in the complete lack of anyone to root for. In a generally strong cast, Georgia Landers is notable for giving some warmth to Isabella, a character whose chastity and religious fervour might have made her a great role model to a 1604 audience, but whose utterly half-hearted defence of her brother's life, even before she's offered Angelo's deal, tends to make her hard to like to modern eyes, certainly mine. Ishia Bennison's Escalus has a tendency to come across as an eccentric old duffer, which possibly gives a hint of why the Duke didn't put the city in the care of her more obviously competent, less sociopathic deputy (I often forget that the Duke knew precisely what kind of scumbag Angelo was before putting him in charge, as evidenced by the Mariana plotline.) As for the Duke, recasting the character as an unhappily closeted lesbian puts a different spin on her complex and unhealthy relationship with morality and the enforcement of the laws. 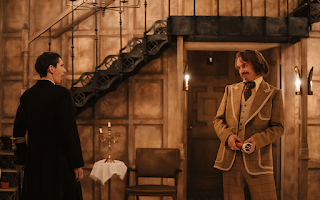 The comic subplot is another element of the play that can be painful to watch, but which McIntyre turns around: There's some genuine sympathy for the displaced pimps Overdone (Bennison) and Pompey (Eloise Secker,) making the self-serving Lucio (Gyuri Sarossy) the clear villain of that particular piece. Meanwhile, a few well-chosen comedy props help the Dogberry-lite Elbow (Daniel Millar) actually be funny, which is rare enough, and in a very different performance Millar makes the Provost the quietly decent rock under the extreme characters who hold sway over most of the story. Apart from a few staging ideas this Measure for Measure doesn't reinvent the wheel, but it still feels notable to me, perhaps because the interesting productions of this play - like Cheek by Jowl's, the Young Vic's or the Donmar's - have tended to be pretty high-concept and heavily edited. So to play it fairly straight while avoiding getting tangled in the play's many traps and actually make it consistently entertaining feels like an achievement.
Measure for Measure by William Shakespeare is booking until the 15th of January at the Sam Wanamaker Playhouse.
Running time: 2 hours 45 minutes inluding interval.
Photo credit: Helen Murray.
*and I live fairly locally, imagine having a hefty commute home and wondering if there'll even be a train home at all; yes, as always happens I did spot people making a sudden exit at the advertised end time of 10pm
†who you'd think would be a hard man to make look too unattractive, but someone in the wig department is certainly giving it a go
Posted by nick730 at 23:29