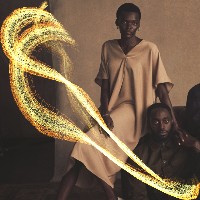 Do you know why you can't lick your own elbow? I certainly do, given the amount of times I've heard the opening lines of Nick Payne's Constellations, and Marianne's eccentric pick-up line that, depending on how she delivers it and what kind of Roland she meets, either falls flat on its arse or begins a complex relationship that'll be a major part of both their lives. I've previously seen the roles played by Sally Hawkins and Rafe Spall (twice,) Joe Armstrong and Louise Brealey, Peter Capaldi and Zoë Wanamaker, and most recently Omari Douglas and Russell Tovey. When Michael Longhurst's production returned to the West End this summer as the Donmar's response to the challenges of Covid-safe theatre, it was with four alternating casts, and I was tempted to see all of them. But I thought after a year without live theatre, the same play four times in a couple of months might blow my mind, so I gave myself the rule of sticking to two - the casts I considered furthest from what I'd seen before.
Of the two casts that left out, the opening one with Sheila Atim as physicist Marianne and Ivanno Jeremiah as beekeper Roland was the hardest cut for me, so with a couple more months' distance from the last time I saw the play I couldn't resist the opportunity to make up for it, as the Donald and Margot Warehouse makes recordings of all four Vaudeville casts available to rent online throughout November. 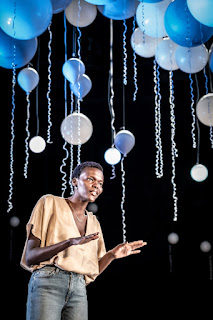 If the idea of the multiverse was becoming relatively mainstream when the play premiered in 2012, you can't make a Spider-Man movie without it by now, so the high concept is easy to understand: We see short scenes from the couple's lives, but they come from a variety of alternate universes, in which their relationship plays out in hugely different ways. But some elements stay the same in every version, including a serious health scare for Marianne that allows the play to explore the idea of assisted suicide, and decide whether that's the best way to end their story. And of course, I wouldn't be so attached to the play if that sadness was all it offered - it's very funny and human along the way. 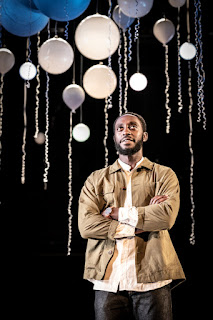 Atim and Jeremiah bring the charm and lightness of touch that you would hope for, and which makes you invest in the two across alternate realities. They're possibly the youngest pairing I've seen, which dials up the tragic dimension, and Jeremiah invests so much into the penultimate scene that you can still hear the crack in his voice in the coda. Part of the play's genius is that instead of massive changes, it's often the good or bad choice of a single word, or a difference in tone of voice or attitude, that decides which vastly different universe the characters get to inhabit next; seeing multiple casts I've been struck by how this extends to the whole interpretation of the characters. Who's the strongest in the relationship can vary between casts, and here Atim makes it decidedly Marianne: With the exception of the handful of more aggressive scenes, Jeremiah's is a pretty gentle Roland who depends on her to a great extent; Atim's isn't a fragile Marianne but a determined one who guides him gently but firmly to the conclusion(s) she's reached. Finally, this was also a conscious choice by the production to include an all-black cast, to ensure more people could see themselves in the characters; one notable thing this affects is that it adds a nastier edge to the story of police targeting Roland's chaotic early attempts at beekeeping. 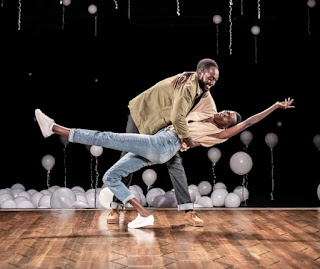 I was a bit surprised to find this was a performance just for the cameras rather than one filmed from the regular run; I did miss the sense of atmosphere you get from having an audience in, and the warm feeling of them laughing and quickly getting to know the characters. The flipside is that Longhurst has a lot of choice of shots and close-ups he can use for the filmed version, and really get into the actors' emotions. And the lack of audience means the most profoundly quiet version of the one scene in sign language, which makes you watch it almost holding your breath (another scene that opens up alternatives in and of itself: Is this a universe where one of the pair has been D/deaf all along, or one where Marianne's illness has made her lose the power of speech entirely?) Yet another dip into the world(s) of Constellations proves worth my time, and hopefully a lot more people will take this latest opportunity to do so.
Constellations by Nick Payne is available to stream until the 29th of November on the Donmar Warehouse's website.
Running time: 1 hour 10 minutes.
Photo credit: Marc Brenner.
Posted by nick730 at 15:45