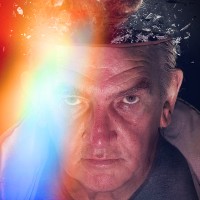 David Ireland's plays see modern-day Northern Ireland as a place suffering from an identity crisis and collective PTSD from the Troubles; his viciously dark comedy takes on a Kafkaesque surreal journey in this English premiere of an earlier play, Yes So I Said Yes. Alan "Snuffy" Black (Daragh O’Malley) was a loyalist paramilitary in his youth, and spent some time in prison for an unspecified, but according to him fairly trivial, number of terrorist killings. Released into a country that no longer defaults to violence, he's a lonely old man who feels marginalised, depressed, and unfamiliar with the world around him, a situation which comes to a head when his neighbour's dog starts waking him up every night at 3am with his barking. But his neighbour (Owen O’Neill) insists there is no dog and, no longer sure if he's imagining things, Snuffy hopes a doctor can help him. Or, if not a doctor, Eamonn Holmes.
On Ceci Calf's set where tidily swept-up gravel ends up scattered around, and the place not as tidy as it might want to appear to the outside world, Max Elton's production takes Snuffy on a trip around an Ireland that sometimes seems real, at others is a nightmare where he seems to be the only Protestant left on the island. 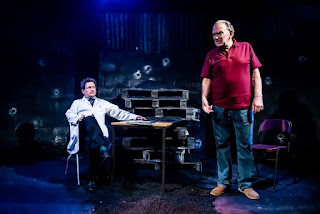 And when Snuffy actually meets and has a conversation with the dog, Lando Calrissian* (Kevin Trainor,) things get even more surreal, culminating in an attack by a cell of loyalist terrorists (Kevin Murphy and Declan Rodgers,) who seem to have come out of his past to accuse him of going soft. Eventually he and his neighbour take part in a kind of peace talk presided over by psychiatrist Aine (Laura Dos Santos,) whose solution is extreme - but actually seems inevitable given the 80 minutes leading up to it. 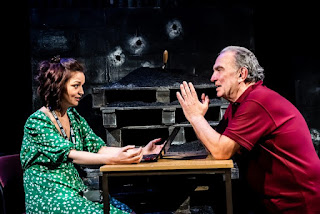 Because this is the playwright notorious for the baby in the bin bag, and if we don't get quite that level of shock value, Yes So I Said Yes variously either discusses or shows brutal violence, bestiality and rape - the latter two a lot. In familiarly extreme style, these come mixed in with a lot of inappropriate humour: Of the many memorable comic lines, "...and that's why all the cows in Ireland are lesbians to this day" is just about the only one whose big laugh doesn't come mixed with a horrified gasp. 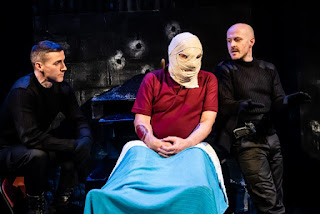 It's extreme but effective, and as ever I find it seems a suitably attention-grabbing approach to a subject that I think in most of mainland Britain has perhaps been seen as closed and forgotten, but a reminder that some of these wounds are still sore and could reopen is welcome. I did find that the play comes down a bit too much on the side of agreeing with Snuffy that the compromise is like a kind of rape, a sentiment that's problematic on any number of fronts. But the general thrust of its argument is powerfully, shockingly, but also hilariously conveyed.
Yes So I Said Yes by David Ireland is booking until the 18th of December at the Finborough Theatre.
Running time: 1 hour 20 minutes straight through.
Photo credit: Lidia Crisafulli.
*the dog insists it's an entirely original name and no, he didn't get it from Star Wars, he only watches films with dogs in them
Posted by nick730 at 17:54