PREVIEW DISCLAIMER: This is one of those Broadway-style long preview periods, with the official press being invited in on the 8th of December. 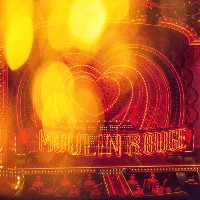 I often get songs stuck in my head when I look at what shows are coming up in my diary, and lately I've just been hearing "Moulin Rouge! Aha! Take it now or leave it, now is all we get, nothing promised no regrets!" Which is ironic, because that's more or less the only song from the last 150 years not to make its way into John Logan's jukebox musical, which puts the much-loved Baz Luhrmann film on stage with a few twists on the soundtrack. The original Moulin Rouge! gave Bohemian 19th century Paris and the titular burlesque club a doomed love story set to incongruous, anachronistic music that mainly consisted of relatively recent pop hits, and Logan's stage version does the same: Many of the most popular numbers from the film remain (so it opens with an energetic "Lady Marmalade" from the club's chorus girls,) but it's been 20 years since the original, so a lot of newer hits also get a look-in.
Next it's a love triangle between Satine (Liisi LaFontaine,) the star turn, Christian (Jamie Bogyo,) the penniless American songwriter who's trying to get a show put on at the Moulin Rouge, and the man Satine is meant to be seducing, the Duke (Simon Bailey,) whose patronage could save the club, or sink it if he's not happy. 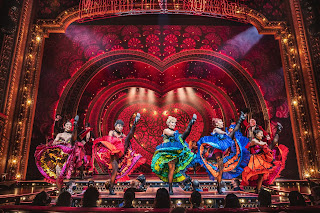 Both the original and this version sell themselves as a spectacular and that's what Alex Timbers's production delivers: The Piccadilly Theatre, which has had some improvements made to the auditorium during the pandemic (I can't speak for the other levels but the seats in the Grand Circle have been completely replaced, which has improved the sightlines; one would hope the collapsing ceiling has also been looked at,) has also been transformed by Derek McLane's expansive set design, which together with Catherine Zuber's costumes and Justin Townsend's lighting really give the audience their money's worth. It's a level of high camp that's echoed in the show itself, which doesn't take itself remotely seriously. Christian's sidekicks Toulouse Lautrec (Jason Pennycooke, really staking his claim to all the West End's comedy French accent roles,) and Argentinian dancer Santiago (Elia Lo Tauro) are the often scene-stealing comic relief in the narrative scenes. 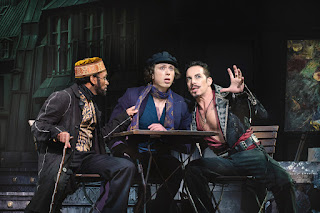 But much of the humour comes from the music choices: The show is made up almost entirely of medleys and mash-ups, with some of the dozens of pop songs that crop up barely lasting a couple of lines*. Moulin Rouge! falls into the category of jukebox musicals that absolutely embrace the ridiculousness of trying to get an existing song into an unrelated narrative, and the amound of times the tune changes mid-number only means more opportunities for laughs at how audaciously Logan's crowbarred some of the songs in, sometimes to fit a tenuous theme (so Satine's introduced with a jewellery-themed number that goes from "Diamonds are Forever," via "Diamonds are a Girl's Best Friend" and "Single Ladies" to Rihanna's "Shine Bright Like Anne Diamond.") Personally one of my biggest laughs came at the end of the first act, when a medley that literally takes in twenty songs and has seen Satine try to deny any interest in Christian, suddenly has her enthusiastically join in with "I Will Always Love You."† 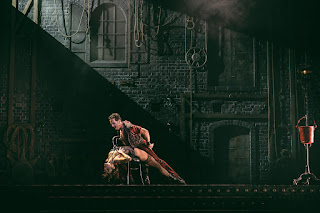 LaFontaine and Bogyo's voices go well together without one overpowering the other, but I can't say I was ever the least bit emotionally involved in their story, or in fact any of the characters, despite the sightlines and design making it easy to feel connected to the stage even from a distance‡. Arguably this is pretty low down the list of the production's concerns, and with spectacle, comedy and high camp the priority, the love story is little more than a hook to hang everything else on. Still, with Satine's rare case of Period Drama Indigestion developing into the more common, and much deadlier Period Drama Cough, I'd have hoped for at least a little bit of an emotional hit. 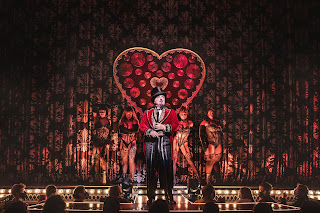