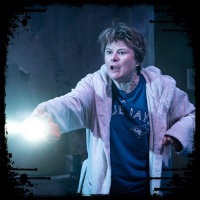 Branden Jacobs-Jenkins has been an up-and-coming name in American playwriting in the last couple of years – I personally liked An Octoroon, if not as much as everyone else seemed to, while being less convinced by Gloria, but it was hard to deny the obvious potential. For my money this is the one where that potential is realised (albeit in a play written five years ago,) as the Donmar Warehouse stages the UK premiere of Appropriate. On the surface this is the playwright’s most conventional play to date, being his take on That American Play Where An Extended Family Gets Together After A Long Time, Preferably At Thanksgiving But That’s Optional. Six months after the death of their reclusive father, the Lafayette siblings and their families go to his plantation house in Arkansas; he was a hoarder who left half a million dollars in debt, so they have a lot of work to do clearing the place up so that his belongings can be sold in an estate sale, and the house and land sold at auction. 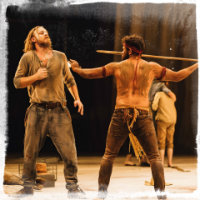 While Peter Gynt has a stint up at the Edinburgh Festival the National does a straight swap, with the Sydney Theatre Company’s visiting production of The Secret River coming to the Olivier for a couple of weeks’ run (minus its narrator Ningali Lawford-Wolf, who died suddenly during the Edinburgh run; Pauline Whyman has been flown over to read in the role.) Andrew Bovell’s play adapts Kate Grenville’s novel about the bloody origin story of modern Australia, one that mirrors the treatment of the Native Americans but is arguably less well-known internationally. William Thornhill (Nathaniel Dean) has had his death sentence for theft commuted to transportation, and his wife Sal (Georgia Adamson) and sons have followed him to Australia. Once his sentence is up, Sal wants them to go straight back to London but William asks her to wait five years so they can build up enough money through farming to return in more comfort than they left. 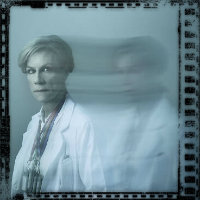 When an Artistic Director leaves their theatre, their final production is generally made a big deal of. Less so in the slightly more nebulous role of Associate Director, but Robert Icke’s time at the Almeida has seen him shoot up to superstar director status, so his last time in this particular role has been worthy of much comment. As with many of his biggest hits at this theatre, The Doctor sees Icke do his own radical rewrite of a European classic, and after more famous works like the Oresteia, Mary Stuart and Uncle Vanya, he bows out with a more obscure work, Arthur Schnitzler’s Professor Bernhardi. It’s not one I’d heard of before but apparently it’s a classic clash between science and medicine, Christian and Jew; in Icke’s hands it becomes a clash between much more – and so much more than we can even see. Ruth Wolff (Juliet Stevenson) is founder and head of a private hospital specialising in dementia research, and a familiar figure from medical dramas – the brilliant but not-particularly-likeable, abrupt and no-nonsense surgeon.

Theatre review: Once On This Island 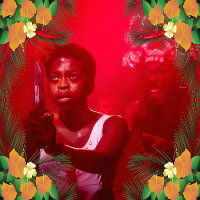 After last year’s Bring It On, youth musical theatre company the British Theatre Academy returns for a second summer season at Southwark Playhouse, the centrepiece a revival of Lynn Ahrens (book and lyrics) and Stephen Flaherty’s (music) 1990 fable Once on This Island. Taking its themes (very loosely) from The Little Mermaid and applying them to a story about the legacy of colonialism, it’s set on an island in the French Antilles divided starkly along both geographical and racial lines – there are the black “peasants,” and the white “grands hommes,” descendants of the French colonisers. Orphan Ti Moune (Chrissie Bhima) is discovered in a tree after a tropical storm and rescued by peasants. When she grows up and witnesses a car crash, she believes that the reason she was saved from the storm as a child is so that she can in turn save the driver’s life. 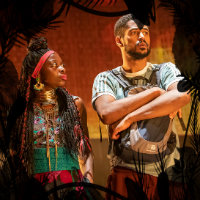 It’s meant to be something of a party but the Young Vic’s Tree will likely be remembered as the show where Idris Elba and Kwame Kwei-Armah Milkshake Ducked, after the controversy over how much of the show they’re credited with creating actually owes to writers Tori Allen-Martin and Sarah Henley. The latter two are credited in the programme notes as having “helped Elba along the way” – in his personal list of thanks, not the official acknowledgements – and under the circumstances it’s interesting to note that there’s no specific writing credit anywhere. But obviously I have no way of judging who’s in the right so all I can say is what the finished article is like. I can say that from an audience point of view it’s been a bit of a rollercoaster figuring out if the show would give me backache – I booked when it went on sale back in November 2018 before the configuration had been finalised, and a couple of months ago the website blurb announced that Tree was meant to be experienced standing, with only a handful of seated tickets available for those with access issues. 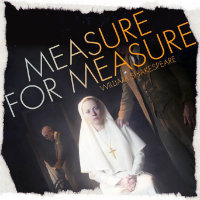 The current RST season has so far been OK without coming close to blowing me away, and it now limps to an end with Measure for Measure. A Problem Play - so much so that it fits into the narrow original definition of the term that only encompassed three plays - it's admittedly not one I find it easy to like, unless approached with a kind of originality and flair that Gregory Doran's production doesn't have to offer. Vienna - in Stephen Brimson Lewis' design an early 20th century version, the Vienna of the waltzes - has always had prohibitively strict morality laws that have been hard to enforce (because, as the play acknowledges, it would entail expecting people not to behave like people.) The current Duke (Antony Byrne) has been particularly lax in enforcing the law, and the city has become a haven for extramarital sex, whether for fun or profit. The Duke regrets this but after all this time thinks it would be hard for him to enforce it again himself so, pretending to leave the city, he leaves his deputy Angelo (Sandy Grierson) in charge, while staying in Vienna in disguise to see what happens. 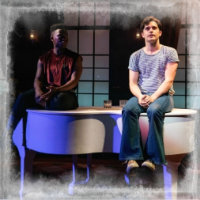 The 1973 arson that killed dozens in New Orleans’ UpStairs Lounge gay bar was the biggest terrorist attack on the LGBTQ+ community before the Pulse shooting in Orlando, but ranks as something of a forgotten chapter of queer history. I’d never heard of it before this year, but perhaps it’s fitting that in the 50th anniversary of the Stonewall riots other landmark moments are commemorated, and I’ve seen the attack referenced on stage twice this year: It formed a plot point in Gently Down the Stream, and is now the inspiration for Max Vernon’s musical The View UpStairs. In the present day, entitled influencer Wes (Tyrone Huntley) buys a burnt-out building in New Orleans’ French Quarter with the intention of gutting it and turning it into the flagship store for his new fashion line. It is, of course, the building that once house the UpStairs Lounge, and when he’s alone the ghosts of the bar’s owner Henri (Carly Mercedes Dyer) and her clientele appear. 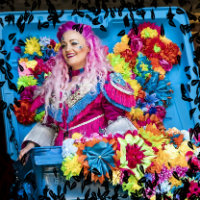 The third and last of this year's major London Midsummer Night's Dreams comes courtesy of Sean Holmes in his new position as an associate at the Globe. In a crowded field the production needs to do a lot to stand out: While there's a couple of interesting little twists on the familiar story this isn't a particularly high-concept Dream; instead everyone's energies have been thrown into mining every possible moment of comedy, with great success. Jean Chan's Athens is more South American than Southern European, the design evoking a pastel-coloured Rio Carnival, although to start with this is for appearances only - Duke Theseus (Peter Bourke) is holding festivities for his upcoming marriage to Hippolyta (Victoria Elliott) but the latter has no choice in the matter of marrying a much older man, and is far from thrilled with it - this is the second Dream this summer to have the Amazon Queen arrive on stage in a box, although it's played slightly more for laughs here. 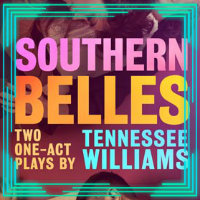 London’s unofficial Tennessee Williams season continues, and if Orpheus Descending and The Night of the Iguana are comparatively infrequently produced then the two one-act plays paired up by the King’s Head as Southern Belles are outright obscurities. Both deal with queer stories with varying levels of directness, and correspondingly varying levels of success. In Something Unspoken, Southern Grand Dame Cornelia (Annabel Leventon) is at home sitting by the phone, pointedly avoiding a meeting of the local chapter of the Daughters of the Confederacy at which a vote is being held. Her hope is that she’s so well-respected within the society that she’ll finally be elected to the highest position of Regent unopposed: But she’s so nervous that things might not work out that way that she’s feigning illness and staying at home; and her fears are well-founded, as her mole keeps calling from the election with unpromising updates.