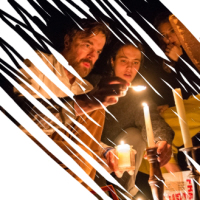 For the second of his Good But Incredibly Long shows at the Almeida (if the rumoured Andrew Scott Hamlet pans out, I imagine we'll be looking at a trilogy,) Robert Icke jumps forward a couple of millennia from the Oresteia to Chekhov, and his rural tragedy* Uncle Vanya. When his late sister married a noted academic and was given a farm as a dowry, John (Paul Rhys) dedicated his life to managing it, sending the money to his brother-in-law to fund his writing. When his first wife died, Alexander (Hilton McRae) got remarried, to the much younger Elena (Vanessa Kirby.) Now retired, Alexander has brought Elena to live on the farm with him, and actually spending time with the man he idolised for years has made John realise a harsh truth: Alexander is in fact a very minor, derivative scholar, and John's worked 25 years to fund an academic legacy that will actually be instantly forgotten.

Not that Alexander himself realises this, and after a lifetime of unquestioned respect he's settling himself in to be the master of his first wife's estate, quietly confident that everyone will do as he wishes. 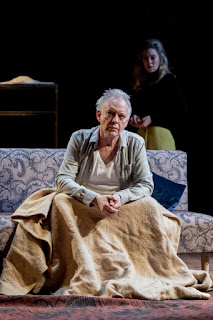 This is a working farm but when the story starts nobody seems able to do anything because of the new arrivals; Elena in particular has entranced both John and his doctor friend Michael (Tobias Menzies, whom Icke now seems to have inherited as a frequent collaborator from Rupert Goold.) The latter's fixation with her new stepmother is particularly painful for Alexander's tomboyish daughter Sonya (Jessica Brown Findlay,) who's been quietly in love with the doctor for years. 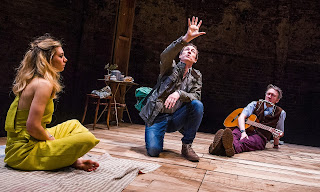 If the opening scene is the characters' boredom, the other three see how this pressure is released, with potentially dangerous consequences. Hildegard Bechtler's set is of a plain, wooden-framed box that revolves anti-clockwise in the first three acts, completing a full revolution in each act as the events inside it also unravel. I'm often to be found bemoaning bad blocking but here the constantly-shifting visibility seems not only deliberate but a plus - sometimes we have a clear view, sometimes we're peering round one of the box's corner pillars or through a cabinet, making for a particularly Brechtian distancing effect. It also, with the help of Jackie Shemesh's lighting design, makes for a number of beautiful visuals, while Icke uses the few moments when his actors break out of the box to strong effect. 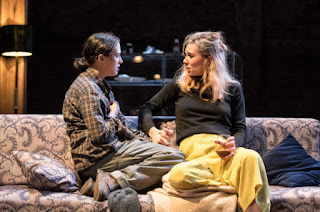 Rhys and Menzies are strong as the male leads but it's the women who steal the show - Brown Findlay is a heartbreakingly vulnerable Sonya who even (just about) gets away with the character's overwrought final speech. Kirby may have an even harder job as a character who, even she realises, is a bit of a nonentity, her looks alone making the men believe she's more interesting than she actually is. Kirby's understated comic timing in her awkward scenes with the doctor (and Icke's allowing us a moment into her mind) help bring the character to life. 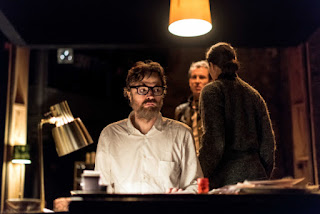 Icke's decision to anglicise the names apparently comes from an academic telling him only morons wouldn't know Vanya was a nickname. For the sake of anyone who isn't conversant in the diminutive of every name in every language, Icke has made Vanya John or, more frequently, Johnny, the slightly dismissive tone particularly relevant in the third act when the respect (or lack of it) for his life and hard work becomes a crucial issue. 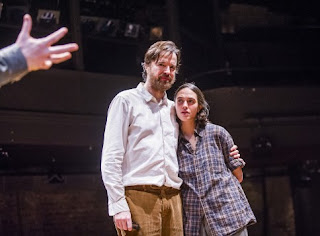 As Icke's second show in a row to come in over the three-hour mark (and no early start for evening performances this time around,) the running time is naturally worth a mention. There's three intervals, but they're all short, and unlike at the Old Vic the ushers do a good job keeping them that way. The production does justify the running time, and the three intervals, which serve as welcome breathers from the increasingly intense emotions on stage. But in the unlikely event Robert Icke is reading this and is getting ideas after two very long yet very successful shows, I'd just like to reiterate it works despite the running time, not because of it - we've already got a Trevor Nunn and a Lucy Bailey, so the "quantity must equal quality" school of directing is well-enough represented. 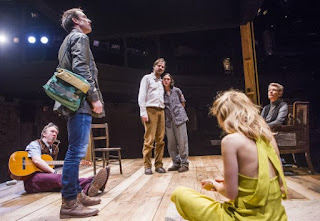 In the final act, the set revolves clockwise; things are going back to how they were, but it's only one revolution and we've had three the other way, so everything isn't all right at the end. This isn't quite up there with last year's Oresteia, and the play will always be a difficult one for me to watch because Vanya's horror that he may still have decades to live is a major part of how my own bipolar manifests itself. But having only seen two productions of the play before, which many people have informed me were two of the worst-ever, I do finally seem to have caught the production that justifies Uncle Vanya's enduring popularity.

Uncle Vanya by Anton Chekhov in a version by Robert Icke is booking until the 26th of March at the Almeida Theatre.

*even Chekhov didn't try to pass off a play with a "happy ending" of "never mind, we'll be dead soon enough" as a comedy
Posted by nick730 at 23:56