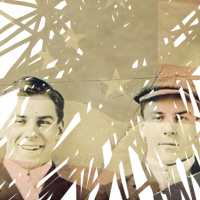 After the rise of the Nazis in the first part of his two-show season at the Union, director Phil Willmott goes for something a bit lighter but not necessarily easier: Road Show is the fourth title, and who knows how many dozen rewrites and reinventions, for Sondheim and Weidman's attempt to tell the story of Addison Meisner, the turn-of-the-20th century architect whose style defined much of how Florida looks to this day. After their father dies, leaving them poorer than they expected, Addy (Howard Jenkins) and his brother Willie (Andre Rafig) seek their fortune in the Alaskan gold rush. Addy's hard work and determination sees their plot of land yield results, only for his brother to lose it in a card game. It sets a pattern: The drunk coke-head Willie is a schemer whose plans always seem to leave him penniless and take any number of other victims with him.

Addy keeps trying to move on, often succeeding for a while, but Willie always seems to find him in the end and bring his customary chaos with him. 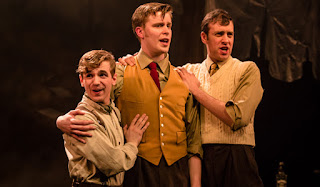 In its current form, Road Show got its UK premiere at the Menier five years ago, in a big-budget production imported from the US, and although it never really seemed like one of Sondheim's best works, throwing everything but the kitchen sink at it certainly papered over many of the cracks. Willmott has a lot of experience putting big musicals together on a much smaller budget so his production is well-constructed and sturdy but there's no disguising the fact that only a couple of songs stand out, in a story that jumps around too much for us to get a chance to care about the characters. 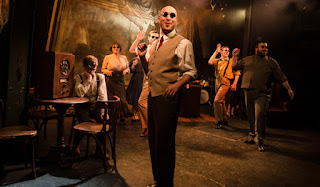 In this particular instance, it leads to the first half lacking in energy - somewhat paradoxically, given how frantically the action moves from place to place - as the story's inability to settle feels listless. It does settle, in the romance between Addy and Hollis (Joshua LeClair,) the spoilt-but-sweet rich kid with a vague dream of building an artists' colony on Palm Beach (apart from its chequered history, Road Show is also notable for being the only Sondheim musical with an explicitly gay couple at its centre; despite being set between the 1900s and 1920s, this is also played as remarkably unremarkable, with the only commentary on the relationship being Willie's vague disapproval and suggestion he could make things difficult for the couple if he doesn't get his way.) 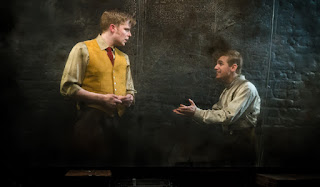 Of course Willie does get his way, as he always does, and the couple break up as a result of his shady dealings - the framing device of a dying Addison (Steve Watts) looking back on his life has warned us the relationship is doomed. Apart from a few vocal wobbles from Jenkins this is a generally strong production within the confines of a fringe musical; those confines aren't usually a problem but here despite everyone's best efforts, they leave the show exposed, and the reason it's regarded as problematic obvious.

Road Show by Stephen Sondheim and John Weidman is booking until the 5th of March at the Union Theatre.