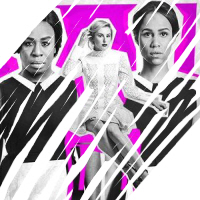 In the play considered Jean Genet's masterpiece, The Maids are Solange (Uzo Aduba) and her younger sister Claire (Zawe Ashton,) downtrodden and patronised but allowed into any corner of their Master and Mistress' lives. They've already used this insider knowledge to take revenge on the Master, Claire having sent the police an anonymous letter detailing certain illegal activities that have now landed him in prison. They'd like to go one step further with the Mistress (Laura Carmichael) though: When she's out they like to dress up and rehearse ways of murdering her. When they hear the Master has been released on bail, they realise he'll soon figure out who framed him, and decide they have to turn their fantasy of killing the boss into reality - but despite a poisoned cup of tea it proves harder than they thought.

For Jamie Lloyd's last production in Trafalgar Studios before moving to bigger venues in the ATG stable, he's returned to the original "Trafalgar Transformed" design of a traverse stage, Soutra Gilmour placing a jewel box littered with rose petals between the audience seating banks to frame the action. 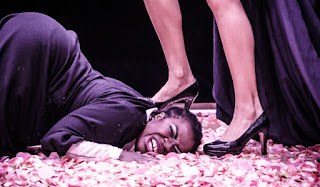 Although the opening, where Claire dresses up as Mistress, exaggeratedly abusing Solange only to get her comeuppance, is a fantasy the maids play out, its heightened performance style does extend to the rest of the play, which has a surreal, dreamlike quality. Lloyd has said he didn't set out to deliberately cast two black actresses serving a white one, but once he'd got them it inevitably informed the production, and so Aduba and Ashton speak in Southern USA accents that add an undertone of discomfort to the situation. The performances are as good as I'd hoped: Aduba does exactly what you want from an actor famous for one excellent performance, which is to give another excellent, but completely different performance; Ashton has always been good at roles that require a surface cockiness with a constant underscore of panic; and as Mistress is a doll-like Lady Gaga figure, even Carmichael gives a performance that shouldn't be at too much risk of waking Peter Hall up. 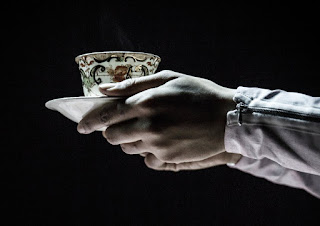 But good performances can't always carry a show and this is one of those instances where, finally seeing a play considered a masterpiece, I fail to see what the fuss is about. Genet's point about the lower classes' attempts to rise up against their oppressors rebounding on them is a good one but it's made at great length, and the translation by Benedict Andrews and Andrew Upton relies too much on the characters saying "cunt" for supposed shock value (the first one did get a big gasp from a woman near us; presumably she was there as a Downton fan rather than Orange Is The New Black.) I also feel Lloyd is to blame for a production that, with its sudden lighting shifts and visual flair, superficially seems to have a lot of variety but actually maintains a monotonous pace for its full two hours. The reason I was able to clinically pick out everything that actually worked in The Maids is that the overall effect was, sadly, very dull.

The Maids by Jean Genet in a version by Benedict Andrews & Andrew Upton is booking until the 21st of May at Trafalgar Studio 1.