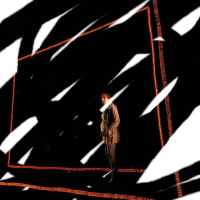 Mrs Jarrett (Linda Bassett) is passing an open door in a garden fence when she peers in and is invited - by someone who already seems to know her name - to join the three other women in there for tea and a chat. Lena (Kika Markham) hasn't been leaving the house, and the other women suspect she's not been taking her medication properly. It's best never to mention cats in front of Sally (Deborah Findlay,) as it upsets her (birds are fine, in fact they discuss birds a lot, as long as it doesn't lead to talk of cats chasing them.) And Vi (June Watson) spent six years in prison for accidentally-on-purpose killing her husband, after which her hairdressing career never really recovered. Escaped Alone is Caryl Churchill's latest play and the women's conversations are delivered in the minimal style she often employs - exchanging only fragments of sentences but the meaning still managing to come across clearly.

The cosy scene is frequently interrupted though as Mrs Jarrett faces the audience to tell us of, sometimes surreal, floods, famines and plagues that have left the world an apocalyptic, violent wasteland. 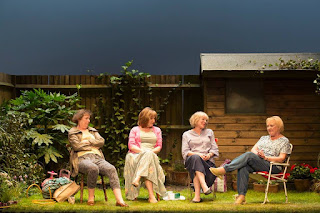 Miriam Buether's set delineates between a sunlit naturalistic garden and a dark downstage space, framed by buzzing and flickering red spiral lights (lighting by Peter Mumford,) in which Mrs Jarrett presents her doom-laden monologues. As is often the case, the precise meaning of Churchill's play remains evasive - I couldn't even decide whether the apocalyptic events are happening at some point in the future, or whether the whole play takes place during them and the garden is a safe haven from the catastrophe outside. But James Macdonald has directed the playwright's work before, and his production shows total confidence in the elusive material. Together with lovely performances from the four actors, stories both light and dark delivered with a twinkle in the eye, despite the often bleak context and repetitive structure Escaped Alone is often funny and never dull.

Escaped Alone by Caryl Churchill is booking until the 12th of March at the Royal Court's Jerwood Theatre Downstairs.