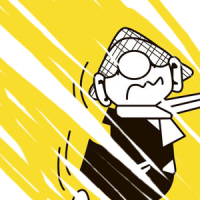 Taking its cue from the success of You're a Good Man, Charlie Brown, a British comic strip got in on the game of trying a musical spin-off; the unlikely team of Alan Price from The Animals (music and lyrics) and Trevor Peacock from The Vicar of Dibley (book and lyrics) came up with Andy Capp The Musical in 1982. It did make it to the West End but presumably not for long, as it becomes the latest "forgotten" British musical to get a revival as the Finborough's alternate show. Roger Alborough plays Reg Smythe's famous creation Andy Capp, the permanently unemployed layabout who still seems to find the money to get drunk every night. Andy's wife Flo (Lynn Robertson Hay) is the one with a job, but she still has to beg him for money if she wants to go to bingo, or to buy something special - like a new dress for a wedding.

And a wedding is at the centre of the musical's story, as Andy's nephew Elvis Horsepole (Tom Pepper) is planning to get married to Raquel (Tori Hargreaves,) and wants his uncle to be the best man. 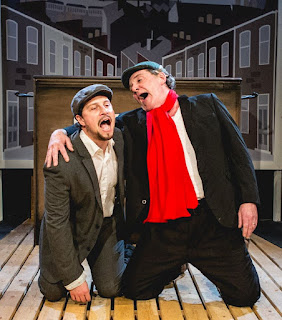 So Price and Peacock have thrown all the best-known elements and characters of the comic strip into a musical that treads quite a tricky path: It is, of course, for the most part a working-class comedy, but the lovable rogue at the centre isn't actually all that lovable - especially in the way he treats his wife - and the show acknowledges this. In a good cast, Robertson Hay provides the heart as Flo finally has enough of her husband's verbal abuse and leaves him. 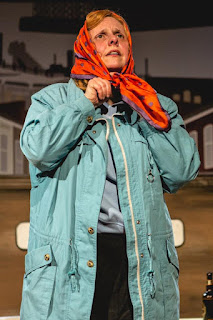 There's fun moments from Todd James as Andy's best friend Chalkie and Jennifer Clement as his wife Ruby, ready with a rolling-pin when he arrives home late and drunk (in a nod to the story's origins, Bex Kemp's design includes cartoon "biff!" "pow!" bubbles to illustrate the comedy violence.) David Muscat's outsider Geordie is both narrator and sole voice of sanity, while Paddy Navin shamelessly hams it up as Elvis' battleaxe future mother-in-law Mrs Scrimmett. 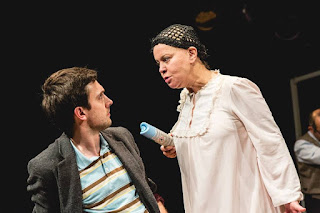 The songs themselves are decent enough if unspectacular, and the large cast pile onto the stage with a lot of energy - apart from a musical director on keyboards in the corner, Jake Smith's production goes for an actor-musician approach which adds to the feel of bustling life around its lazy protagonist. As ever with shows of this scale in this intimate a setting, part of the fun is in seeing the joy on other audience members' faces at being that close to the action. Andy Capp The Musical isn't exactly a timeless classic but it deserves better than to have disappeared for as long as it did, and Smith's production finds a decent balance between enjoying the light comedy and addressing the problematic central character; it'll leave you too saying 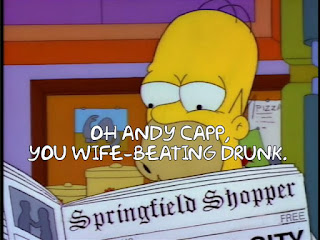 Andy Capp The Musical by Alan Price and Trevor Peacock, based on the comic strip by Reg Smythe, is booking in repertory until the 23rd of February at the Finborough Theatre.