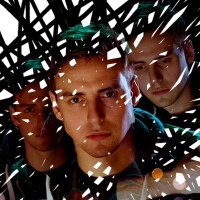 Jamie Muscato has taken over the role of Joe for Bend It Like Beckham's final few months, but for a week he's swapped a particularly colourful West End show for a moody hour under Waterloo Station as part of the annual(ish) Vault Festival. Tim Gilvin's chamber musical monologue Stay Awake, Jake sees Muscato play the titular Jake, who's set off at one in the morning to drive from London to Carlisle. He's had a phone call from his estranged girlfriend Sophia that's shaken him up, and an all-night drive to where she's staying at her parents' house is his desperate attempt to reconcile. Jake is an aspiring comics writer with writer's block; as he tries to think about how to resolve the problems in his superhero duo's relationship, he goes back over the history of his own, which is how we get to hear what went right and wrong for them as he goes up the motorway.

There's no surprises to be had in the story that plays out, in fact everything about Stay Awake, Jake is very minimalistic. It's entirely through-sung, so although Gilvin's tunes are for the most part pretty and enjoyable, and Muscato's a voice you can happily listen to for an hour, they do blur into one after a while. 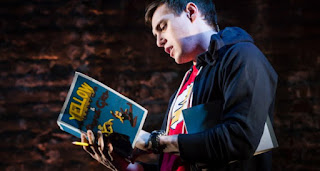 But Muscato, who presumably really believes in this show if he's spending his week off on it, is the right man to hold our attention, his stage presence bringing an affable loser of a character to life. There's not a lot about this musical that'll really make it stand out in the memory (even the idea of Jake solving his real life and writing problems together fizzles out pretty quickly) but at least its confident simplicity makes for a likeable way to spend an hour (in a room that turns out to be surprisingly hot, considering the damp dripping down the walls and onto the stage.)

Stay Awake, Jake by Tim Gilvin is booking until the 7th of February at the Vaults, Waterloo (returns only.)