Theatre review: In the Night Time (Before the Sun Rises) 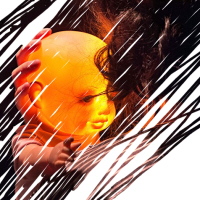 My ongoing attempts to see less theatre always seem to come up against snags; I'd stopped myself from booking for In the Night Time (Before the Sun Rises) at the Gate, as the blurb about a couple kept up all night by their baby didn't really pique my interest. But then Alex Waldmann and Adelle Leonce were announced as the couple and it suddenly seemed harder to skip. Their nameless couple are young, but not so young they don't know what they're doing when they get together - they're a good match and have a fun, stable relationship, living together for some years although not getting married (he'd like to but she doesn't believe in it.) Even a well-adjusted pair aren't a match for the strain put on them by a baby though, and the two narrate the story of a particularly difficult night. Their immediate worries about how well they can look after their daughter get swamped by larger ones about the world they've brought her into.

Nina Segal's debut play is a free-form, lyrical look into the parents' heads, the refrain of "the two things aren't connected" coming back as they start, in fact, to find connections and sinister implications in everything.

It's a frenzied, often dark but ultimately optimistic piece, given a strong production by Ben Kidd. The actors narrate their story in the third person, as if getting their heads around a memory they can't quite believe, and the performance style embraces this: Georgia Lowe's traverse set is initially bare except for all the props, including the actors, plastic-wrapped in a corner. After setting themselves free Waldmann and Leonce put the room together before receiving the baby itself in an Amazon parcel*. The baby itself is a doll whose head lights up to represent its constant screaming. 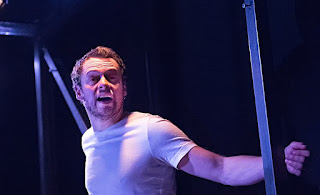 The show should last a concise 60 minutes although tonight it had to be paused for a technical issue; the actors picked it up confidently when we returned and, as they said in a post-show Q&A, at least it wasn't a naturalistic piece so they could easily slot back into the point of the story they'd reached. Still, it's a play that I think probably suffered for the interruption to its buildup of pace and increasingly darkening atmosphere. 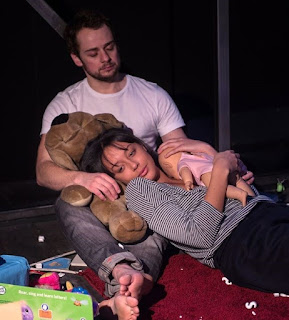 Interestingly, Segal herself doesn't have any children, in fact it turns out Waldmann is the only parent in the company, although he said he thought she captured the sleepless stress of bringing his first child home‡ very accurately. I can't vouch for that myself but I did think from an audience's point of view that the more personal element of the play worked better than the attempts to look at the impact the child and the wider world will have on each other. I suspect this was another show where the production and performances raised a so-so script to something much better, with Leonce and Waldmann's conversational delivery to the audience alternating with moments when they inhabited their characters' mix of anger, exhaustion and fear.

In the Night Time (Before the Sun Rises) by Nina Segal is booking until the 27th of February at the Gate Theatre.

*in the post-show Q&A it was revealed this was a reference to them not being able to return this package if they didn't like it, an idea that apparently got a more explicit call-back that was cut in previews.

‡not so much the second child - like most parents seem to, he said that one was easier because by then he'd come to accept that he wouldn't always know what was going on.
Posted by nick730 at 22:41