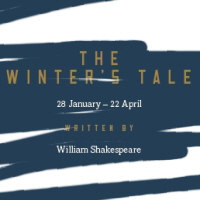 The Swanamaker's first all-Shakespeare season opened, very successfully, with two of his least-performed plays, but its second half brings two late plays that are much more popular - if not always with me. The regularity with which The Winter's Tale is revived is something I find a bit baffling, but every so often a production comes along to justify its popularity and, except for an overly hefty running time, Michael Longhurst's definitely fits into that category. John Light is Leontes, the king of Sicilia who's been best friends with his Bohemian counterpart Polixenes (Simon Armstrong) since childhood; until for no reason at all, he becomes convinced his wife Hermione (Rachael Stirling) is cheating on him with Polixenes, and tries to have both killed. He doesn't come back to his senses until it's too late, and has seemingly lost all his family. But his baby daughter has in fact survived and 16 years later Perdita (Tia Bannon) has the chance to make things right between the royal houses with her romance with Polixenes' son Florizel (Steffan Donnelly.)

I always find the opening half of the play hard going, as it's a pretty long, almost uninterrupted, single minded attack by Leontes on those he loves. Longhurst has found a way to make it work though. 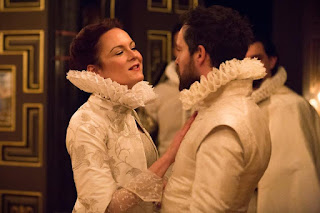 It comes down to atmosphere, and though the candlelight is inevitably a factor, an even bigger one is Simon Slater's music, which kicks in with particularly eerie, jagged sounds with each of Leontes' jealous outbursts. It very much defines Leontes' paranoia as a sudden burst of insanity, perhaps even one caused by the supernatural element that occasionally pops up in the play. This storyline's climactic scene of Hermione being put on trial tends not to work for me as it just rehashes the conspiracy theories of the previous hour, but the Inquisition-like feel it gets here makes it fresh, with a quiet, dignified turn from Stirling as the accused Hermione. And the venue's signature darkness even makes Shakespeare's most notorious stage direction keep its intended creepy effect. 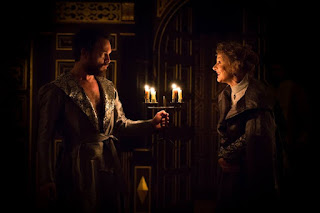 The ultimate play of two halves, Longhurst embraces the contrast either side of the 16-year-gap, with much joy in the Bohemian scenes - the amount of the sheep-shearing festival kept in is obviously part of why the play runs so long overall, but there's no denying it gives the scenes and their characters a memorable quality, in stark contrast to the recent KenBranCo production in which they barely registered. After having to uncharacteristically behave himself in the title role of Pericles, James Garnon gets to go back to what he does best as the thief Autolycus, interacting almost constantly with the audience and very much going for the "lovable rogue" interpretation of a character who can sometimes be much darker. 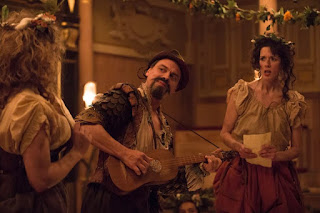 Niamh Cusack has a hard act to follow as Paulina, most recently played in London by Judi Dench, but with the definitive Badass Old LadyTM role played much younger than usual, she dials up the Badass as the one person willing to stand up to Leontes' murderous insanity. 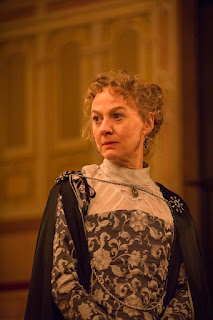 There's some questionable blocking in the crucial climactic scene - that many characters on that small a stage is always tricky but putting Hermione's statue in an alcove surrounded by courtiers blocks her resurrection from most of the audience. So this isn't a perfect production, if such a thing exists, but a director best known for new plays has cast a fresh eye on The Winter's Tale and found its strengths and contrasts, to deliver the best production since Propeller's a few years ago.

The Winter's Tale by William Shakespeare is booking in repertory until the 22nd of April at the Sam Wanamaker Playhouse.