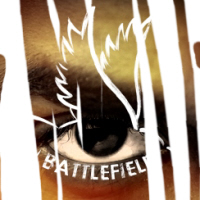 It's probably a safe enough bet to say that Peter Brook is quite fond of the Mahabharata; he staged the entirety of the Indian epic poem 30 years ago, but that doesn't seem to have got it out of his system. Brook and regular collaborator Marie-Hélène Estienne have returned to the story, although this time they mercifully don't have a 9-hour theatrical endurance feat in mind: Battlefield, from an adaptation by Jean-Claude Carrière, deals only with one section of the epic. In fact we very much enter in the middle of the story as the battle fought on the titular field has just ended; whole armies have been wiped out, and all that's left is for a couple of the mortally wounded to shuffle off the mortal coil, with a few parting words of advice for the new king (Jared McNeill) before he takes his throne. Much of this will take the form of fables and recollections.

And this is very much a piece of storytelling theatre; McNeill, Carole Karemera, Ery Nzaramba and Sean O’Callaghan are the storytellers taking on multiple roles, with a drum accompaniment from Toshi Tsuchitori. 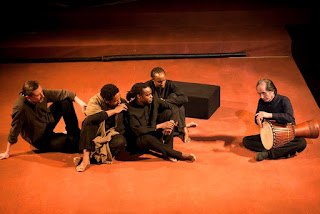 The overall plot sees the new king take over and we follow him for much of his long reign. As well as various supernatural encounters of his own - including meeting the personification of the River Ganges and having a dead ancestor possess his body - we get fables of talking animals and birds, sent to test humans' virtue. The cast are likable, the storytelling - mostly told with the aid of a few blankets and sticks - gentle and simple. 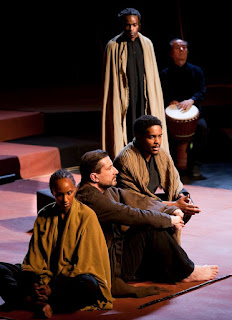 It's a well put-together show but not quite satisfying: It's obvious that this is a fragment of a much greater whole - it feels like we drop in and out of the middle of a soap opera, but this isolated part of the story is still told in quite a rambling style. Beautifully and precisely put together but a bit too nebulous to really care about the characters.