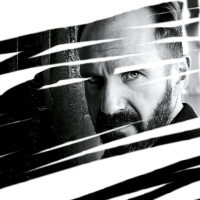 Ralph Fiennes is The Master Bator Builder in another of Ibsen's looks at a failing marriage with a tragic backstory. He plays Halvard Solness, a self-taught architect whose popularity over the last decade has driven every other local architect out of business, including the now-ailing Knut Brovik (James Laurenson.) Solness employs Knut's son Ragnar (Martin Hutson) as an apprentice, deliberately holding him back as he recognises a talent who could replace him in turn. As his career has thrived, Solness' family has suffered - a house fire that kickstarted his career also led to the death of his twin sons; his wife Aline (Linda Emond) has never recovered, not helped by her husband's (probably well-deserved) reputation as a womanizer. Although he protests there's nothing going on between him and his smitten assistant, Ragnar's fiancée Kaja (Charlie Cameron,) he's certainly fond of leading her on.

His intentions towards a newcomer seem far less innocent though: After building a church in a neighbouring town, he promised a 13-year-old girl he'd build her a castle. She took him seriously and ten years to the day Hilde (Sarah Snook) returns to claim it. 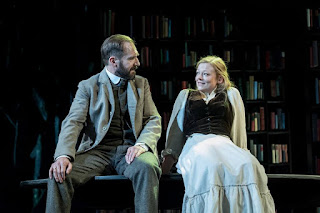 Something about Hilde's tendency towards fantasy clicks with a side of him that believes himself damned: His guilt over his own success sees him secretly believe he can make his will come true, but with deadly consequences like the loss of his sons. Aline is convinced Solness is losing his mind, but neither she nor the down-to-earth doctor (James Dreyfus) has really understood the Master Builder's weird religious delusions. 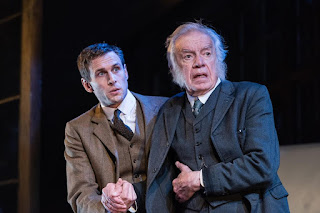 I've often made fun of Voldemort's tendency to milk every word of every line, but while his Solness does indeed speak more slowly than any other character, it's not so much in a self-indulgent way as his trying to get his head round the thoughts Hilde has convinced him to articulate. The rest of the cast go for a speedy and lively delivery that keeps the pace up, but Matthew Warchus' production is seriously hampered elsewhere: Rob Howell's set looks great, a forest of kindling behind a slanted roof filled with holes that walls and bookcases can slot into. But it's so elaborate that even the large and well-equipped Old Vic stage can't manage the scene changes without including two 20-minute intervals (the second actually lasted half an hour; there were undisguised sarcastic cheers when the house lights finally went down again.) 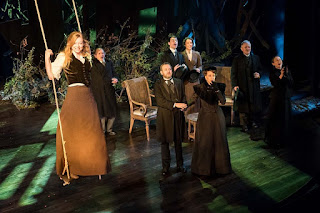 It means that, with David Hare's adaptation increasingly focusing on the mythology Solness and Hilde create for themselves, the production never manages to build any kind of atmosphere around this. It doesn't help that Snook's jolly hockey-sticks performance feels at odds with the mystical fantasy world she seems to inhabit. All things considered it makes for a frustrating experience, a production whose writing, acting and design are all good, but these elements seem unconnected to each other. Crippled by in total 50 minutes' worth of interval, it all looks good enough but the production ends up revealing none of the psychological insight I've recently been appreciating more in Ibsen's work, nor the haunting, quasi-supernatural edge this particular play of his is often known for.

The Master Builder by Henrik Ibsen in a version by David Hare is booking until the 19th of March at the Old Vic.