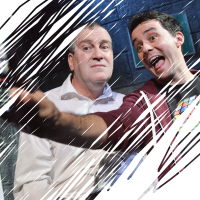 On the one hand, Andrew Payne's The Meeting is a pretty straightforward - and very effective - office sitcom, but on the other it's obvious from the start that it's going to deal with some pretty dark sexual politics. Somewhere fairly senior, but still a couple of floors away from the top, in an unnamed corporation, departmental head Stratton (Mark Hadfield) has been working for months on a project dreamt up by abrasive wunderkind Cole (nice to see Big Favourite Around These Parts Sam Swainsbury back on the London stage.) It's a Monday morning and they're ready to finalise a licensing deal with another company across the road but Jack, the man they've been in talks with, doesn't show up: Rumours are rife about him having had some kind of breakdown and being escorted off the premises. Instead the final deal is postponed to later in the week, with one of Jack's underlings taking over.

This is bad news because Stratton and his boss Frank (Malcolm Sinclair) had spent the time palling up to Jack so they could screw him over at the last minute with some fine print in the contract. 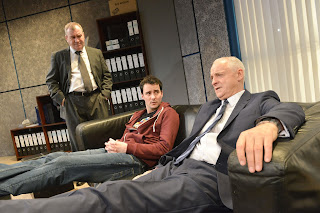 Jack's replacement Ellen (Rebecca Night,) though, is a former lawyer who can be relied on to spot the amendments they've snuck into the paperwork. With the feared, faceless men on the tenth floor expecting them to pull off their trick, three men gang up on one woman to try and intimidate and trick her into signing a bad deal. 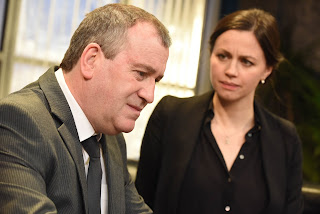 There's definitely a sitcom feel to proceedings with everything about the crucial deal and even what kind of business this is kept entirely vague, while a huge amount of the characters' personal lives keeps intruding on their work. The cast in Denis Lawson's production give strong comic performances, Hadfield supplying a lot of detail to Stratton's nervous little tics and skips, making him a likeably henpecked figure; while Sinclair provides something of a mellifluous comic villain. Swainsbury is clever casting as Cole, a character with some deeply unpleasant behaviour and attitudes towards women, because the actor's abundance of charisma makes you like his overgrown schoolboy in a way that's a little bit uncomfortable in the circumstances. 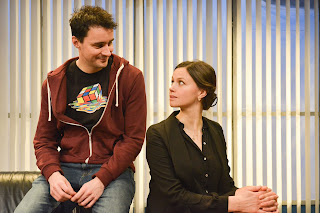 And I think that's much of what Payne's play is trying to do: Present not only some nefarious business practices but also very unpleasant attitudes towards women in such a light way that the audience's enjoyment is tempered with some discomfort. It's a shame that in the process he's given his one female actor the short straw - despite a strong performance from Night Ellen is a fairly generic ice-queen character without the chance to be as funny as the men. And the play overplays its hand about the mistreatment of women in business - the story's final twist of the knife feels particularly out of place considering which character delivers it. But apart from a few flaws this succeeds at what it's aiming for: Light comedy with a decidedly dark underside.

The Meeting by Andrew Payne is booking until the 27th of February at Hampstead Theatre Downstairs (returns only.)