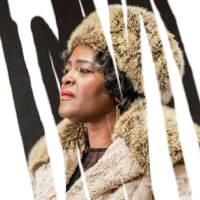 Dominic Cooke directs the 1920s installment of August Wilson's Pittsburgh Cycle - actually the only one of the plays not to be set in Pittsburgh, taking place entirely inside a Chicago recording studio - Ma Rainey's Black Bottom. In this decade of Wilson's look at the black experience in 20th century America, the experience is still one of being second-class citizens, but real-life blues singer Ma Rainey (Sharon D Clarke) isn't going to let that stop her doing exactly what she wants: As the highest-earning artist on Sturdyvant's (Stuart McQuarrie) record label, she can get away with diva behaviour like flaunting her young girlfriend Dussie Mae (Tamara Lawrance,) refusing to sing until she's had her three bottles of Coke brought to her, and demanding the spoken-word intro to the titular song be performed by her nephew Sylvester (Tunji Lucas) - despite his stutter.

Of course she also knows that a star never arrives on time so as we wait for Ma to make her big entrance we have time to meet her backing band, in the small basement room they've been given to rehearse in. 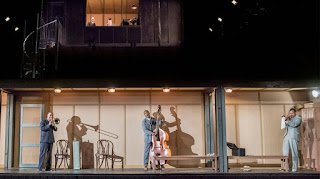 Led by trombonist Cutler (Clint Dyer,) who tries to keep the quartet professional, he regularly clashes with the vain, fiery trumpeter Levee (O-T Fagbenle,) while double-bass player Slow Drag (Giles Terera) and pianist Toledo (Lucian Msamati) get caught in their crossfire. Although at its heart it looks at serious issues, with most of the characters having experienced some serious abuse from white people at some point or other, these stories are used as occasional sharp shocks in what is for the most part a very funny play - the dark moments all the more effective for the contrast. 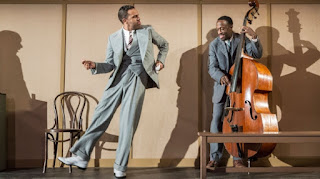 Wilson gets a lot of comedy out of the abrasive back-and-forth between the men, and Cooke's production is, despite its length, slick and full of energy. Underneath the quips, the underlying theme is of black people needing to make sure they seize the respect they're denied, with Toledo lecturing the others on how he believes all black men need to stand together for their rights rather than dig at each other. Meanwhile Ma Rainey knows she's only of interest to white people because she makes them money, but her diva behaviour just because she can get away with it is her own little rebellion. 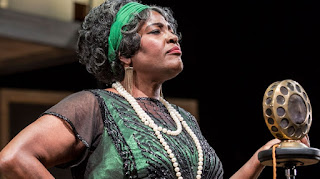 Ultz continues the recent trend of suspending parts of sets from a bare Lyttelton stage with a design that sees the white bosses, Sturdyvant and manager Irvin (Finbar Lynch,) hanging above the studio in a recording booth with a "Do Not Enter" sign, and Ma Rainey with her entourage lording it in the studio itself. But the heart of the play is in the basement, with the musicians in their narrow room that rises up out of the front of the stage. Given the subject matter it's no surprise there's also a few musical numbers from Clarke as well as one from Terera, all helping to add to an evening that perfectly mixes the entertaining with the thought-provoking.

Ma Rainey's Black Bottom by August Wilson is booking in repertory until the 18th of May at the National Theatre's Lyttelton.