Theatre review: The End of Longing 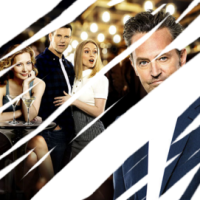 My sister, who saw him on The One Show the other day, says that Matthew Perry comes across as very witty and spontaneous in interviews. So it's interesting that he chose not to utilise any of that in his playwrighting debut. The star of Six White Complainers has based The End of Longing on his own struggles with alcoholism, but says his lead character in the play is based neither on him nor his sitcom character. I can't vouch for the former but as for the latter, Perry himself stars as a sarcastic New Yorker with a very small circle of friends; let's call him Bandler Ching. Bandler meets a pair of female friends in a bar, and starts a relationship with Stephanie (Jennifer Mudge.) Her friend Stevie (Christina Cole) turns out to be shagging Bandler's best friend Joseph (Lloyd Owen,) in one of many such coincidences - there may be the bright lights of a cityscape behind Anna Fleischle's set, but the characters keep bumping into one of the other three people they know.

Stephanie, meanwhile, is a high-class prostitute - a well-paid, sexy and wacky lifestyle described in an opening monologue that makes Secret Diary of a Call Girl seem like gritty realism. 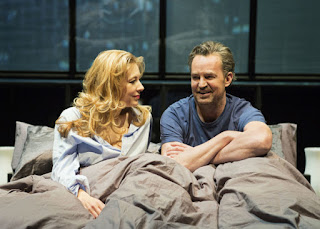 Bandler is a drunk, a fact we know because he keeps telling us, along with the fact that he has no intention of doing anything about it. So his and Stephanie's relationship comes down to a stalemate, him wanting her to give up her fabulous whoring lifestyle, her wanting him to give up the 24/7 drunkenness, neither willing to make the changes required. And then Stevie gets pregnant, so that she and Joseph can have a storyline of sorts too, beyond just commenting on the main couple. 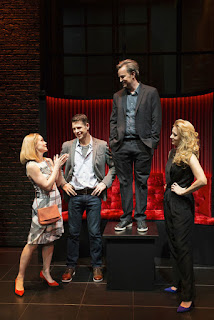 To be fair I only have myself to blame for going to see this - the combination of a star vehicle and Lindsay "that mortgage won't pay itself" Posner directing rang warning bells, but I do like to have an opinion on "event theatre." And it certainly was an event for the packed house, some of whom were cornering an usher beforehand to check that the show would be as much like an extended Friends episode as they hoped. Certainly Perry's performance as Bandler, which mostly consists of shouting sarcastic comments, is... not entirely unfamiliar. He also seems to have tried to give himself a new catchphrase in "can I finish?" - as in, he's telling a story, leaves a huge pause so the other person can comment, and when they do snaps "can I finish?" at them. On the one hand he's trying to distance himself from his sitcom past (by which I mean the characters say "fuck" at regular intervals,) while on the other he tries to head off any comparisons to it by acknowledging the similarities - a stupid best friend called Joseph, a number of references to the characters being "There For You." 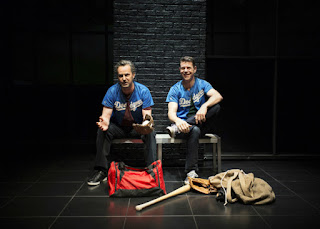 The rest of the cast are decent enough but they're still stuck with a barrage of unfunny lines in an extended, clunky sitcom with wildly inconsistent characters. Penny did try to defend the show at the interval, pointing out the joke in the first act that was actually funny, but by the end she'd given up on it as well after the hamfisted attempts at drama, with all the characters given soul-searching monologues made up of a collection of clichés. Actually the sitcom reference that came to mind wasn't the obvious one, but in fact the moment every US sitcom seems to do, when someone ends up going to see a terrible, overwrought play - this is that play done unironically. At least its anti-alcohol message comes through well: Apparently alcoholism makes you a shit playwright.

(I was going to do the "Longing for the End" joke but I haven't read the official reviews and I assume half of them already did it.)

The End of Longing by Matthew Perry is booking until the 14th of May at the Playhouse Theatre.