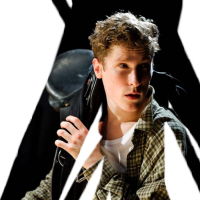 As well as the Finborough's numerous official remits, Neil McPherson does also seem to have a fondness for scheduling rural dramas. The latest is Daniel Foxsmith's Weald, set in what used to be a large farm, but over the years much of it has been sold off, and Sam (David Crellin) is the last of the family that owned it for a couple of centuries. What he's got left is a stables, currently housing eight ageing horses and just about enough work to keep him busy, but when a young man arrives asking for a job he can't turn him down: Jim (Dan Parr) worked for him as a teenager before leaving to try his luck in London. He's come back up North now fleeing something (the same something every young man in a show I've seen recently seems to be running to or from) and, having been with Jim's father when he died, Sam's developed something of a surrogate father/son relationship with Jim.

And that, more than a few weeks' work, is what Jim is really back here to replicate. He's gone through something of a crisis recently and is hoping that coming back to the stables will give him a chance to discuss it and decide what to do next. 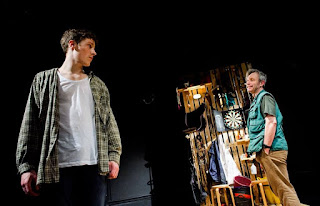 Foxsmith has described his play as being about men's mental health, and the fact that traditional attitudes to masculinity mean they're not easily prepared to open up about their feelings, so despite having returned specifically for that reason, Jim hides his actual issues under bluster. Sam meanwhile has problems of his own that he's suppressing, possibly in a more dangerous way (Chekhov's gun is hanging on the back wall of Christopher Hone's set.) 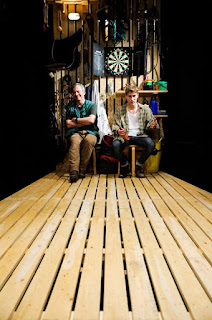 This is a gently involving hour with a couple of likable characters, Crellin impressive as the Shakespeare-quoting, gently disintegrating Sam, while Parr provides the energy in the way Jim buries his feelings in chatter. There's something a little bit clinical about Bryony Shanahan's production though - the play gets a sense of menace from the slight touches of Equus about the setting and Jim's affinity for one particular horse, but not from the buildup of the story itself, and the dénouement ends up feeling a bit out of the blue.

Weald by Daniel Foxsmith is booking until the 27th of February at the Finborough Theatre.